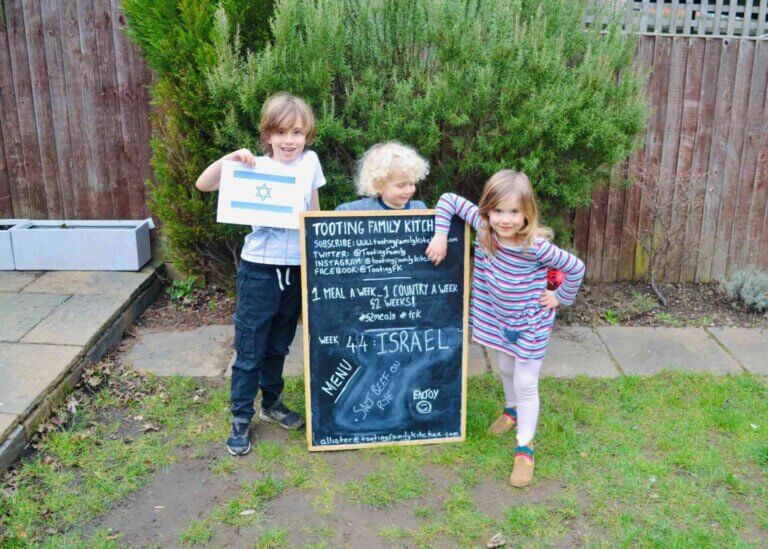 Week 44 and we are incredibly excited to head to Israel and turn our kitchen into a traditional Kosher style deli to cook up one of our favourite treats – a towering sandwich of Salt Beef on Rye!

Kosher style food is something I have always really enjoyed despite not being Jewish. Some of my favourite childhood food memories are hitting some of London’s best salt beef joints with my Dad and brother and having mounds of thickly sliced salt beef or pastrami with pickles and mustard, sandwiched between slices of rye. Notably, the legendary ‘Brass Rail’ at Selfridges (when it was more basic and did not even have chairs…back in the day)! Or as I got older hitting Brick Lane and queuing up with the cabbies for a salt beef bagel and a brew!

Although I have visited Israel, it was a very short trip to check out Jerusalem, but my love of New York starts with the Kosher style delis which sprung up first as take-out services for Jewish immigrants and are very likely to have influenced the likes of Selfridges’ Brass Rail and others. Ironically, what people are likely to recognise as the most iconic Kosher style sandwich, ‘the Reuben’ (even given a boy’s name of Hebrew origin) is in fact not Kosher. It has a layer of swiss cheese on top of the salt beef and sauerkraut and mixing dairy and meat does not comply with the strict dietary standards of traditional Jewish law.

The State of Israel defines itself in part as the nation state of the Jewish people. It was proclaimed on May 14th, 1948 and was the first established Jewish state in 2,000 years. The other momentous event that truly defines Jewish history of the 20th century is of course the Holocaust, the murder of approximately two thirds of Europe’s Jewish population during WWII, an unprecedented crime that is unparalleled in its wickedness and barbarity the scale of which is difficult to fathom. Throughout their history Jews have faced incredible hardships, suffering and catastrophe, but have survived as individuals and collectively as a civilization…and not just survived, but thrived too. To me their collective resilience is un-paralleled. Israel does court controversy, especially around the ongoing Israeli-Palestinian struggles, but even the most ardent critic would (one hopes) understand where their strong sense of self-protection would come from.

Israel is well known for looking out for its country and its people. It is the only country in the world which has more trees today than it did 50 years ago and it recycles 90% of the wastewater it creates, making it the world’s leading nation for water recycling (in the US only approx. 1% is recycled). Further trend setting and in line with mental/physical health, Israel was the first country in the world to ban the use of underweight models in fashion shows and advertisers are required to identify those pictures where people have been phot-shopped. Israel is the location of the world’s only theatre which is made up of only deaf and blind actors and on that topic, Israeli banknotes also have Braille markings on them. It grants citizenship to any Jews who migrate to Israel, known as “The Law of Return” and despite the hardships and hostilities they faced, and in many ways continue to face, Israelis are often ranked amongst the happiest people in Western nations, with one of the highest life expectancies in the world at 82 years. Even the pets are looked after with the first ever cable channel for dogs created to keep them entertained when at home alone!

Israel is the worlds most developed country in-conflict. It has the highest standard of living in the Middle East and ranks amongst the top countries in the world for its education, research and development (as a proportion of GDP), women’s safety, innovativeness and as previously mentioned life expectancy and happiness. Per capita it has the world’s highest rate of university degrees, largest production of scientific papers and even the largest number of chess grandmasters in Beersheba in the Negev desert…and before you replace your old diesel 4×4 with the latest Tesla, be aware that Israeli inventor and CEO of Urban Aeronautics, Rafi Yoeli, believes his prototype of a flying car could hit the market soon…watch this space!

Of course, there is more to Israeli food then a salt beef sandwich and it will comprise of both local dishes and those dishes brought to Israel from various countries that Jews have migrated from incorporating all manner of cooking styles from the Middle East, North Africa, the Mediterranean and beyond. Although approximately 80% of the population is Jewish a significant 20% are not and consists mostly of Arabs and there are many similarities with what is largely considered Arab cuisine, in particular grilled meats, rice dishes, salads, and pitta breads. Coffee is apparently so good in Israel that it is one of the only places that Starbucks have failed to break into, but this has not stopped McDonalds who have opened 180 restaurants approximately 50 of which are Kosher!

We hope our salt beef on rye is fit for the finest kosher deli! 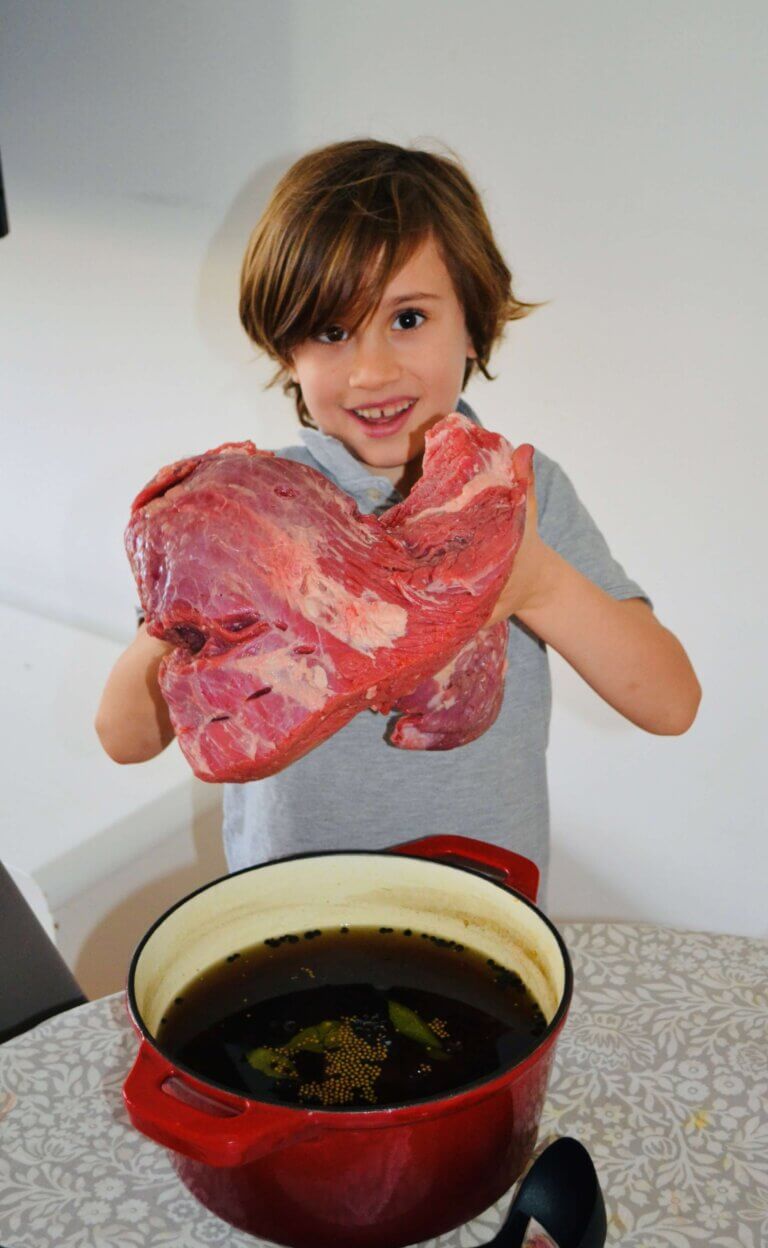 Getting brining for 7 days 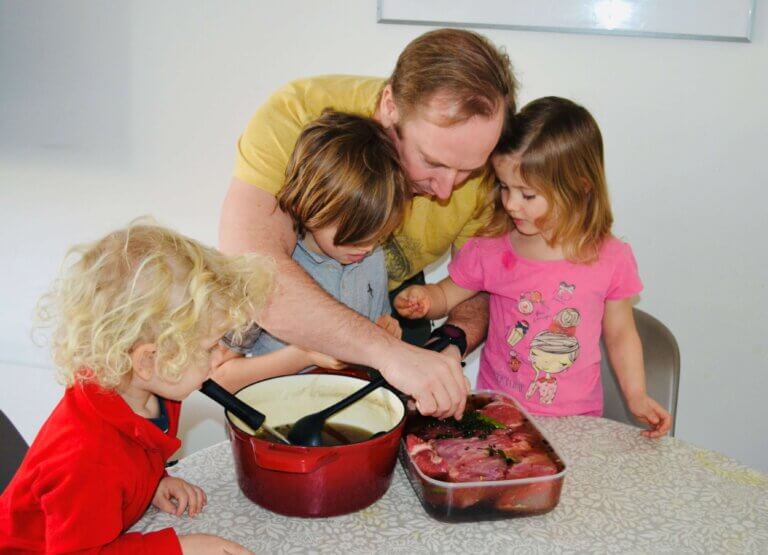 Head baker on the rye 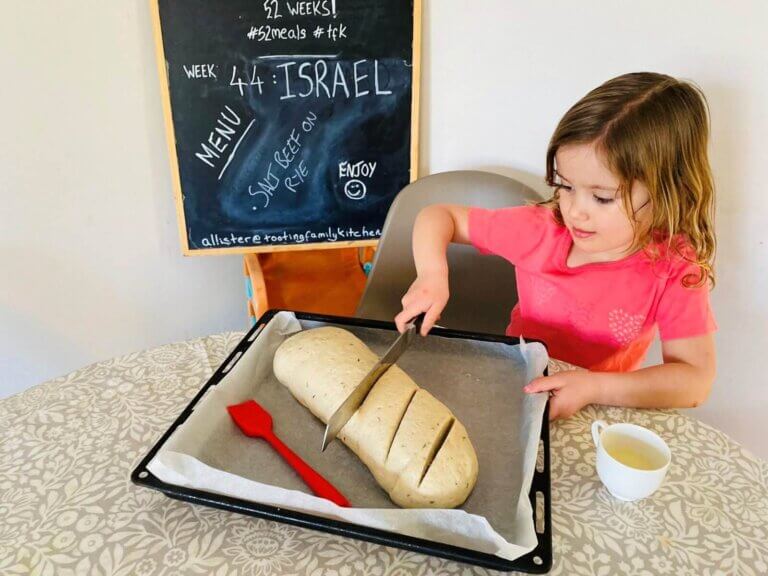 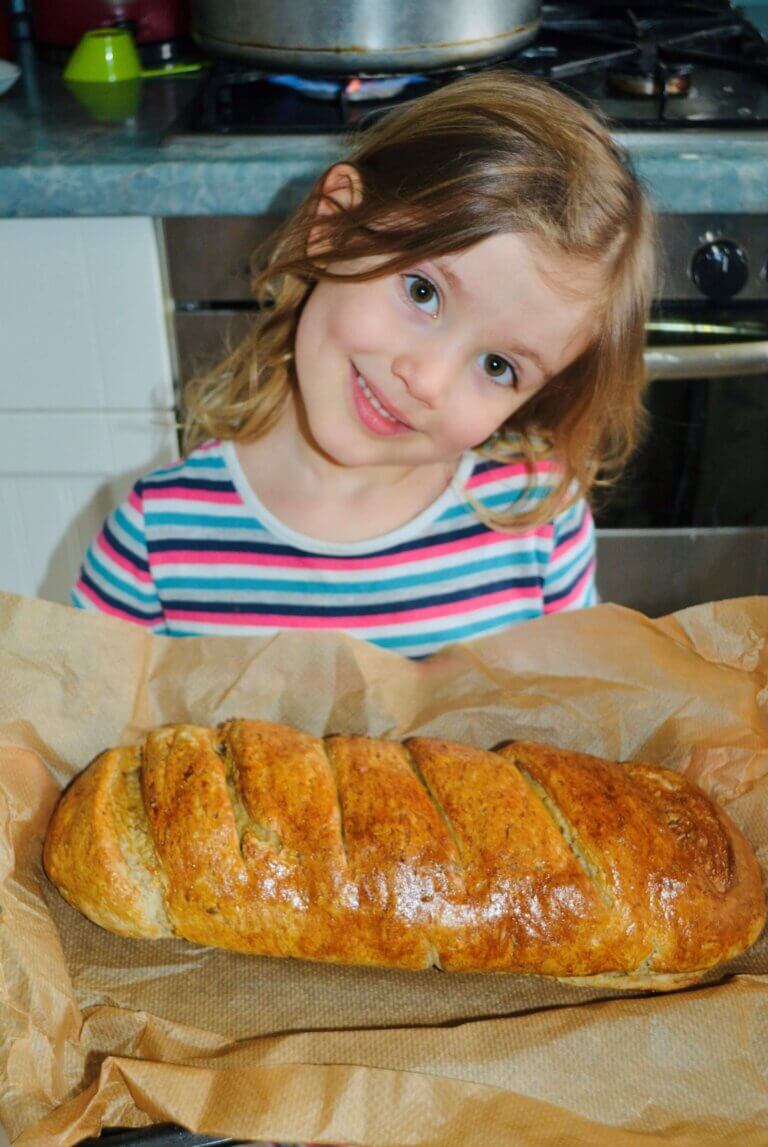 Ready to stack up! 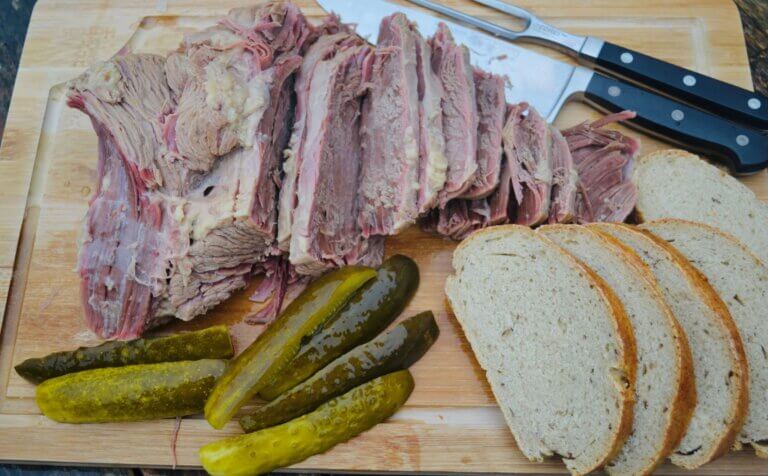 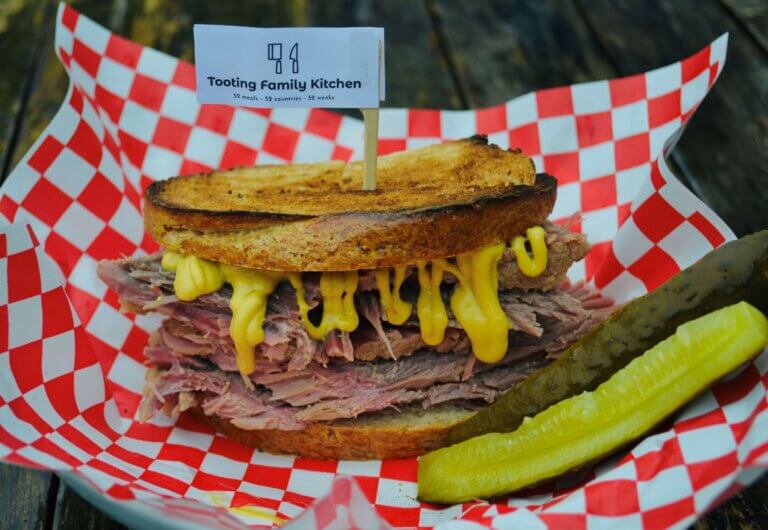 Enough water to cover the beef 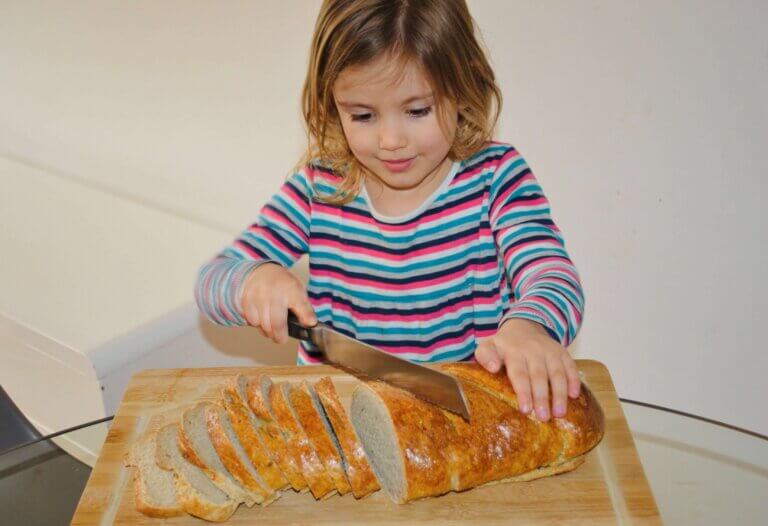 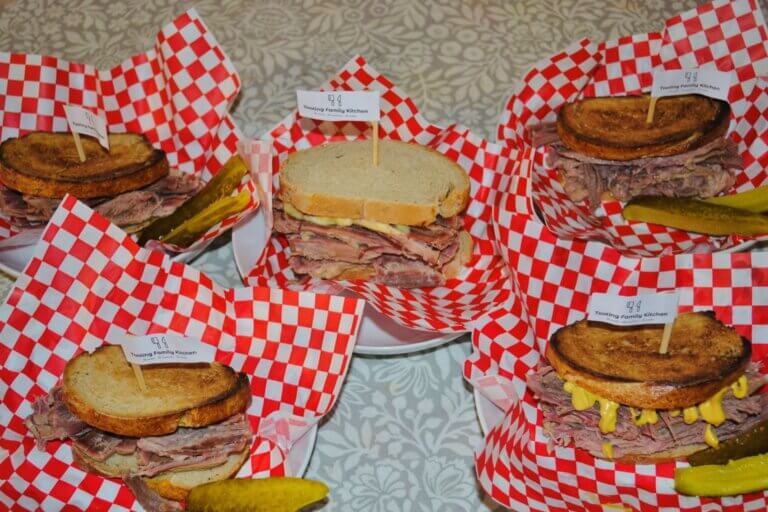 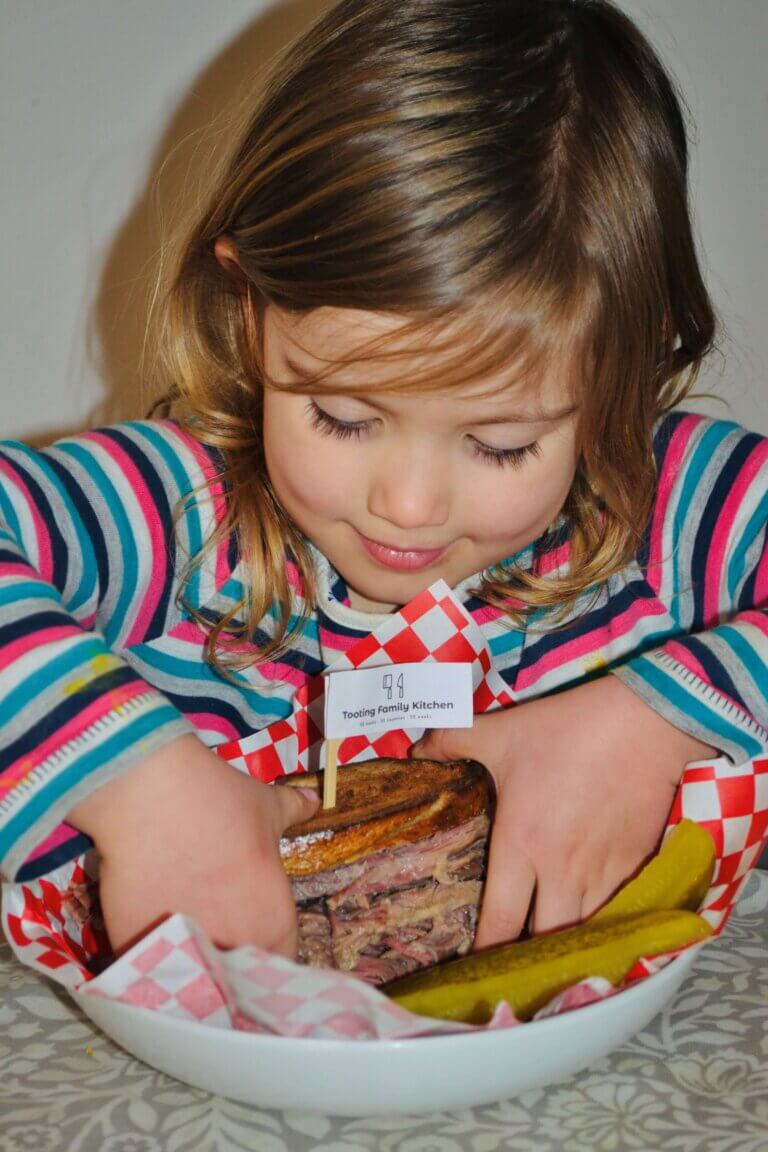 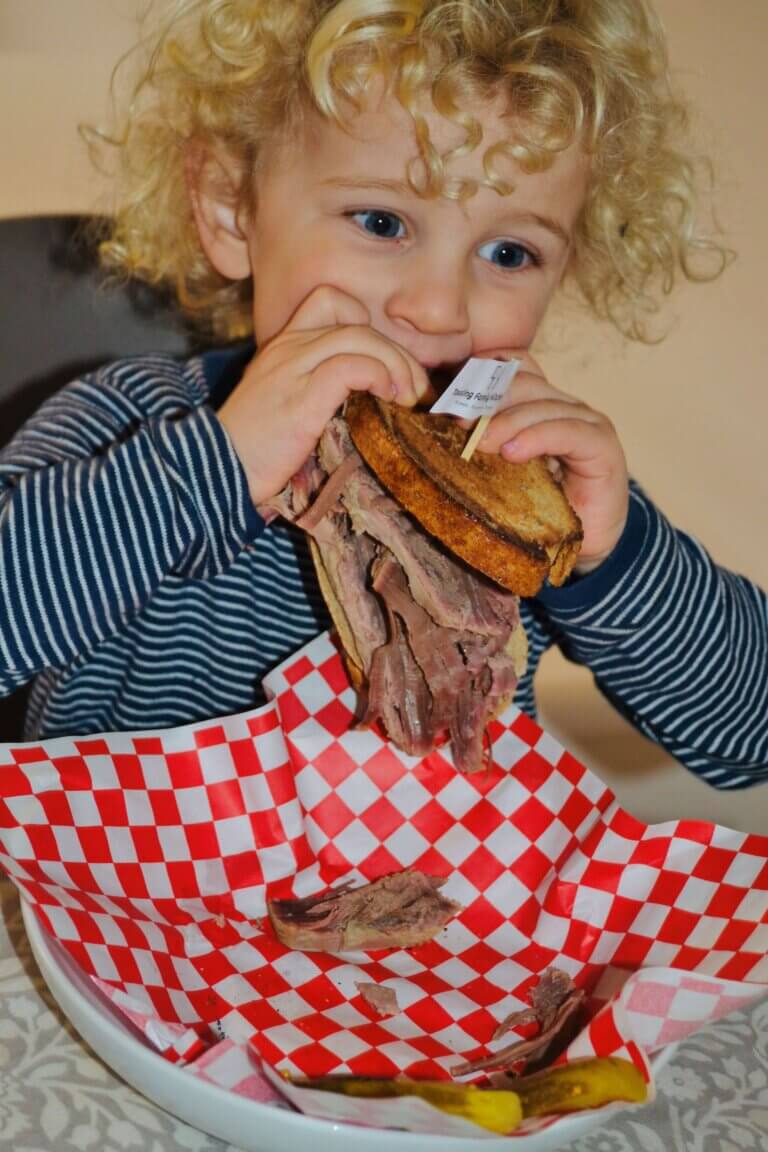 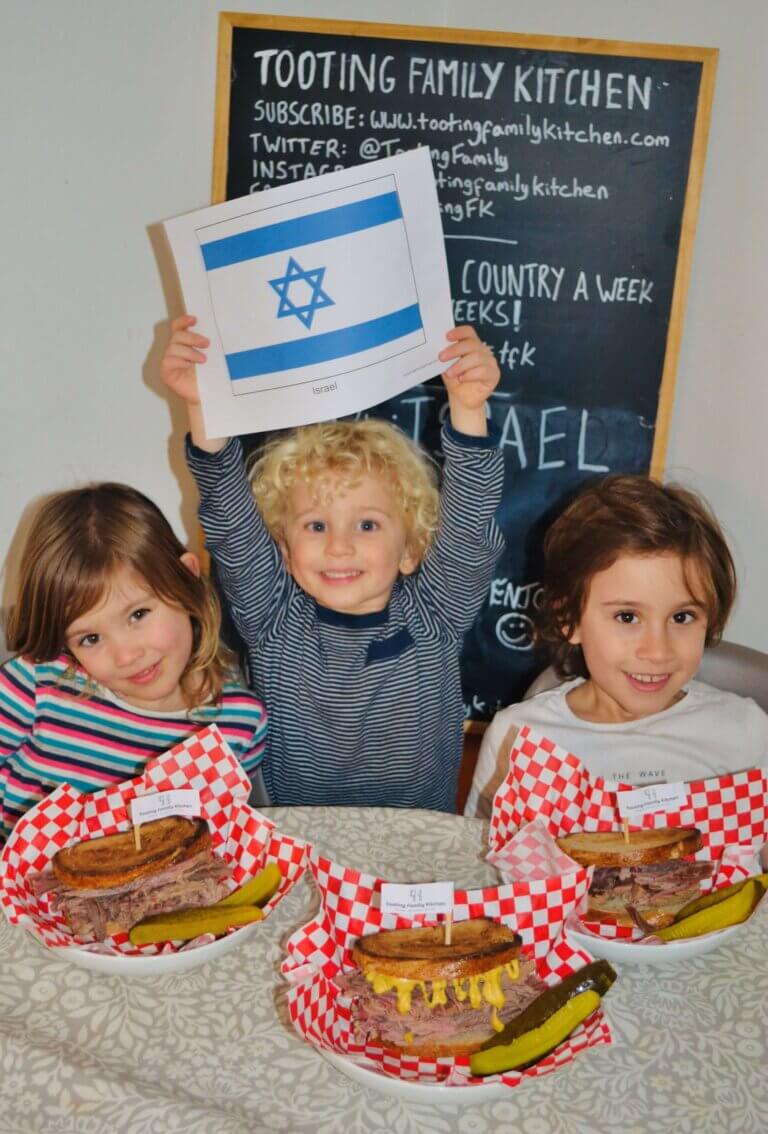 Thank you Israel, that was epic! Can’t wait to explore more of your cuisine.

Next week we are excited to head to Thailandl!!! Please don’t forget to SUBSCRIBE (scroll to bottom) & SHARE and if you have any International Food ideas or recipes from around the world you wish to share please do drop us a line