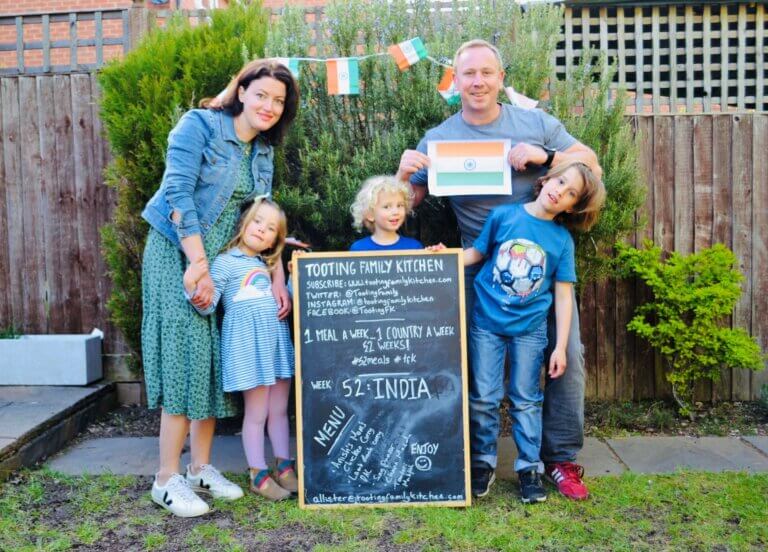 Week 52 and we finally arrive at the end of our journey… 52 Weeks – 52 Meals – 52 Countries, done! What a year it has been juggling the burdens of 3 lockdowns, work, business, home-school and all the emotional ups and downs that life has thrown at so many of us. A year ago, the idea of this challenge popped into my head. I thought it would be a great way to celebrate diversity through food, to get the kids cooking and learning and to give us something to focus on as a family of 5, cooped up in a small house in Tooting. Whilst I did underestimate the size of the challenge, it has been one of the most rewarding experiences and everything that we set out to achieve, we did. It has been incredible to connect with people of so many nationalities across our local community, and heart-warming to see the joy it brings them to talk about their country’s food – often with references to their own childhoods. In times of lockdown, and when confined to our own 4 walls, to be speaking to people across Africa, the Caribbean, the Middle East and beyond, has given us a real sense of unity. Sharing anecdotes from our own travels has always been fun, and recognising and dedicating posts to people along the way, some of whom are no longer with us, has been an honour and a privilege. The stars of the show have of course been the little chefs, Sam, Abigail and Joe, and they have simply been awesome. They have seen, smelt, touched and tasted so many foods that they had not even heard about a year ago, and have embraced the challenge wholeheartedly. I hope that it sets a course for the world of opportunity that awaits them. So, whilst I now have to sign a contract with my wife, agreeing to discuss any new projects FULLY, before jumping in headfirst…I would do this challenge again in a heartbeat!

The question of what country was going to be the final destination, is something that I have been asked many times throughout the challenge, but not by those who know me best. I love a good curry, so much so that on occasion, my good friend Paul calls me Al-Frezi, a take on Allister and the Indian dish, Jalfrezi. It is fair to say however, that in the early days my relationship with Indian food was certainly love/hate! I always felt I loved curry, and the very thought of going to an Indian restaurant with ‘the lads’ filled me with excitement, and yet…I can rarely remember having a curry I enjoyed or a night out that didn’t rapidly deteriorate after a trip to the local Indian restaurant. You see, going to the Indian back then was like some kind of ‘man challenge’ and ordering anything less hot than a Vindaloo?… well, I would have been letting myself down! “How’s the curry Al?” … “lovely mate, thanks” … “is it hot?” … “it’s got a little kick to it, not too bad” … would be the usual conversation as we sat there red faced and sweating profusely. And of course, drinking 10 pints of water to try and contain the heat, albeit seemingly making it hotter, is not the best way to start a night on the town. Invariably, when we would eventually leave, we would be clutching our bloated bellies, just wanting to go home, sit on the couch and feel sorry for ourselves. Fortunately though, I was a quick learner and the pattern of behaviour only lasted 10 years. I have now seen the error of my ways and have matured…unless of course I hear someone ordering a Korma, when I cannot help letting out a little stifled laugh! We all do that right?

Not all curries were bad however and I was (and am) fortunate, to be best mates with Anish, ‘Uncle Anish’ to the kids, since our early school days in Bournemouth. I can remember to this day, the first taste of authentic Indian food cooked by Anish’s mum Rui, and his Auntie Jenny…I was addicted…and I wasn’t sweating or drinking 10 pints of water, saying…” I’m fine, I’m fine”. From that day I just had to get back to Anish’s house on a regular basis, to raid his fridge and devour that chicken curry alongside a huge pile of chapatis. I have spent many years asking Anish for his Mum’s chicken curry recipe and never succeeded until now. We are delighted to cook it for part of our Indian Banquet today which really marks for me where it all started! Where the scene had been set for a lifetime of curry explorations and one which, perhaps indirectly, led me to live in Tooting, the home of the best Indian and Pakistani restaurants outside of India and Pakistan!

Realistically the last 52 weeks and 52 meals could have represented a journey solely around India, exploring its regional cuisines and the diversity of its cultures, religions, and languages. From its vast Himalayan peaks to the stunning shores of the Indian Ocean, it truly is a land like no other. So overwhelmingly vast is the country that often statistics given as percentages can give the wrong impression. For example, only 15% of India’s population is Muslim. Only 15%? Yes, only 207 million giving it the 2nd or 3rd biggest Muslim population on the planet, depending on who is doing the count that day, and an almost identical sized Muslim population as Pakistan. Being the wettest country on the planet you don’t really associate desert with India and you would be right. Desert forms less than 5% of the total geographical area and yet this is still an area the size of the entire United Kingdom covered in sand dunes! The top 6 languages of Hindi, Bengali, Telugu, Marathi, Tamil and Urdu are each spoken by the same amount or more than the entire population of England… another 122 languages are spoken by more people than the population of Gillingham…and there are still another 800+ languages! It’s difficult to argue with Mark Twain when he said, “India is, the cradle of the human race, the birthplace of human speech, the mother of history, the grandmother of legend, and the great grandmother of tradition. Our most valuable and most instructive materials in the history of man are treasured up in India only.”

I am delighted to be able to share the final feast with my family, including my parents, who have followed the first 51 weeks 100 miles or so down the road. I learnt to cook watching my parents cook and always ate well as a kid, I hope now my kids can say the same. Thank you to everyone that has read our blog, supported us along the way, shared their recipes, stories and ideas and given us encouragement…we have been surrounded with positivity and it has been amazing ❤ 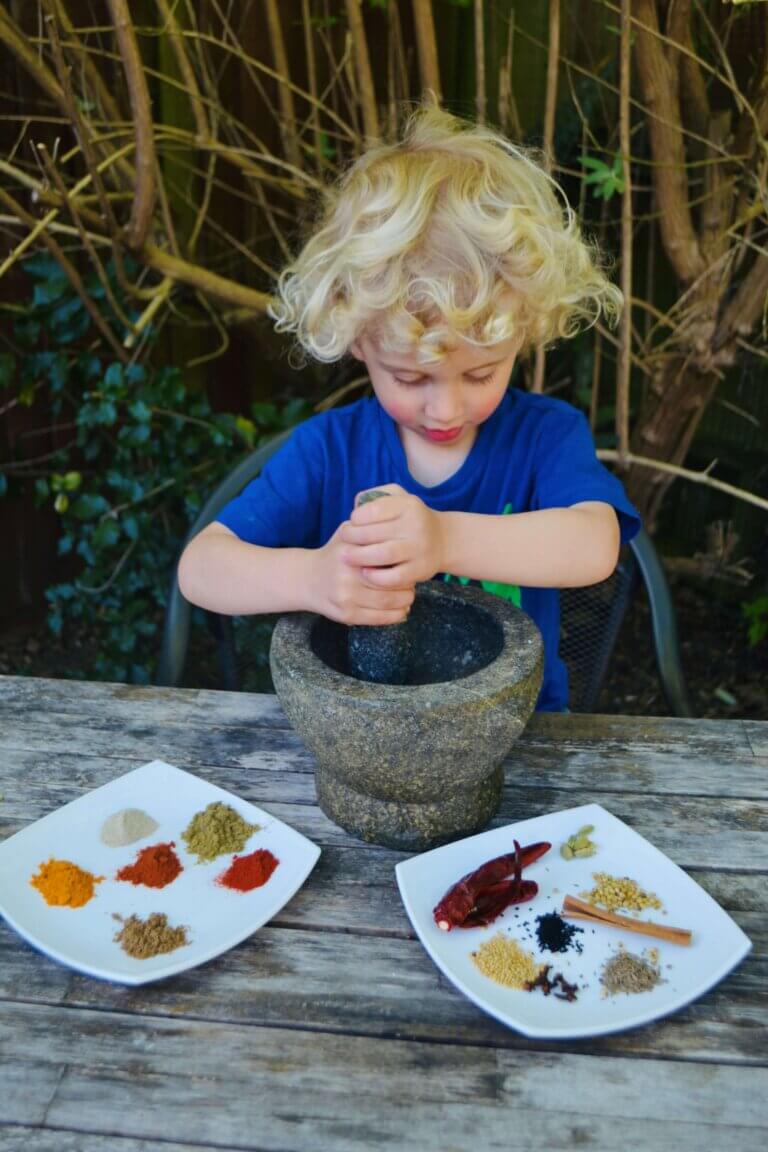 We are going to need a lot of paste! 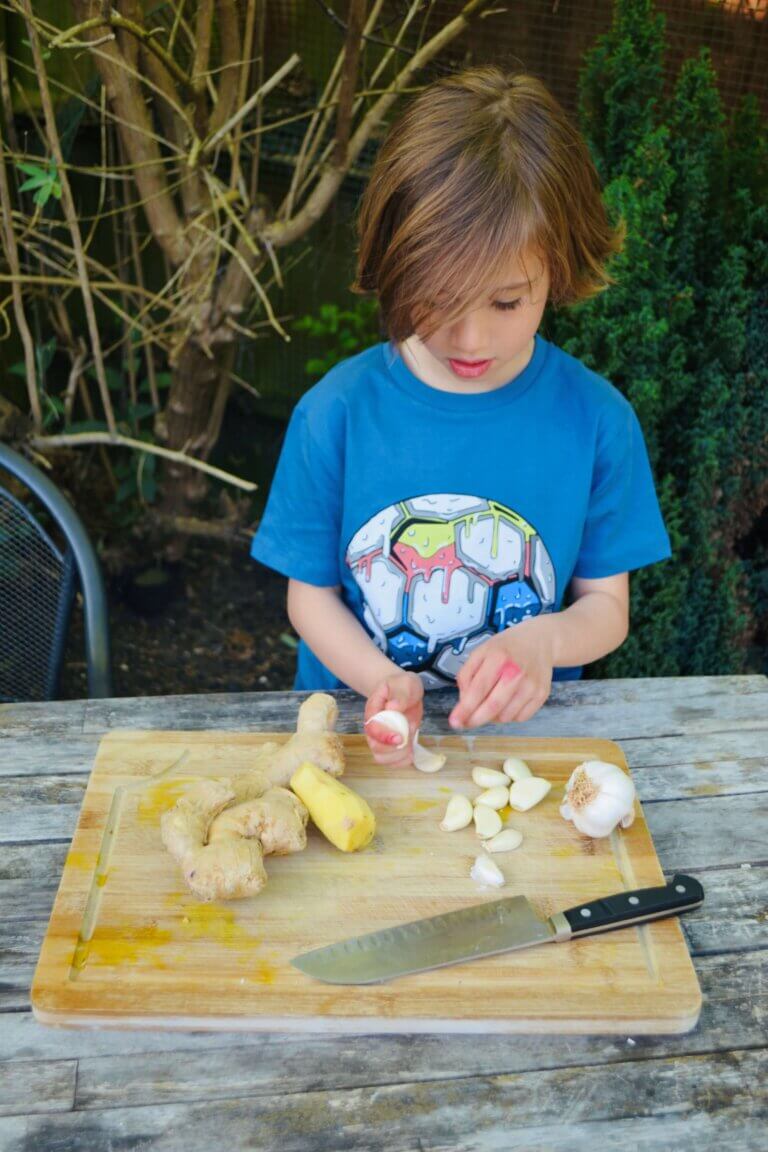 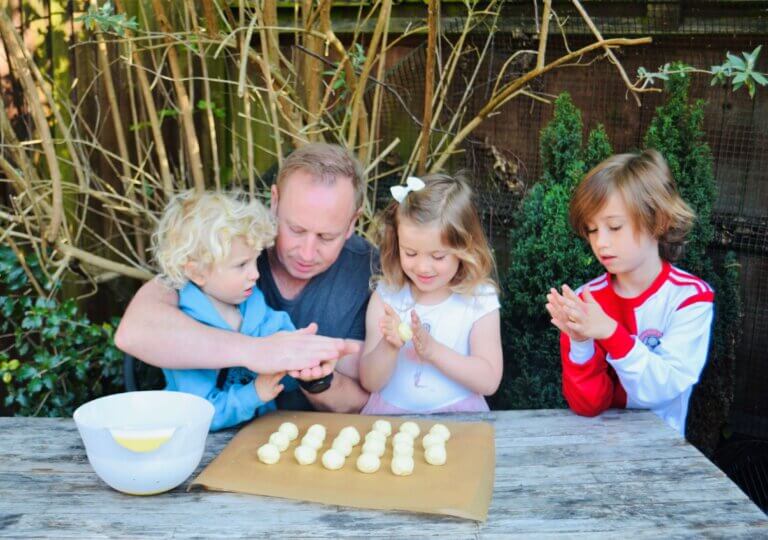 Getting the samosas ready 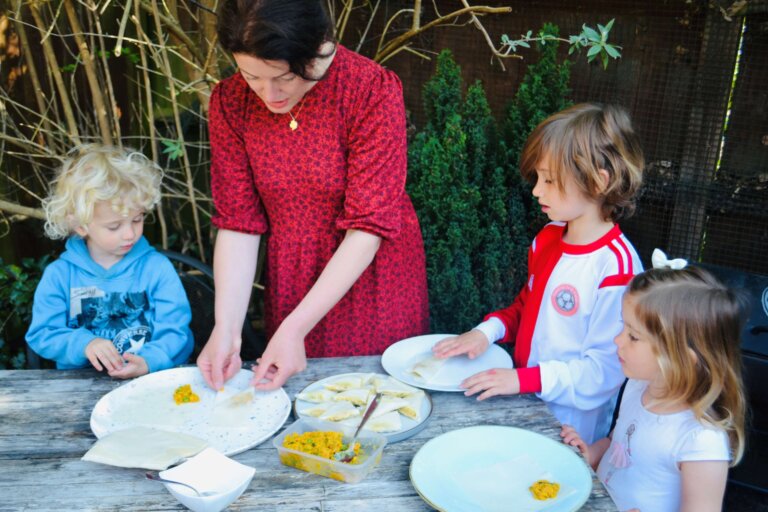 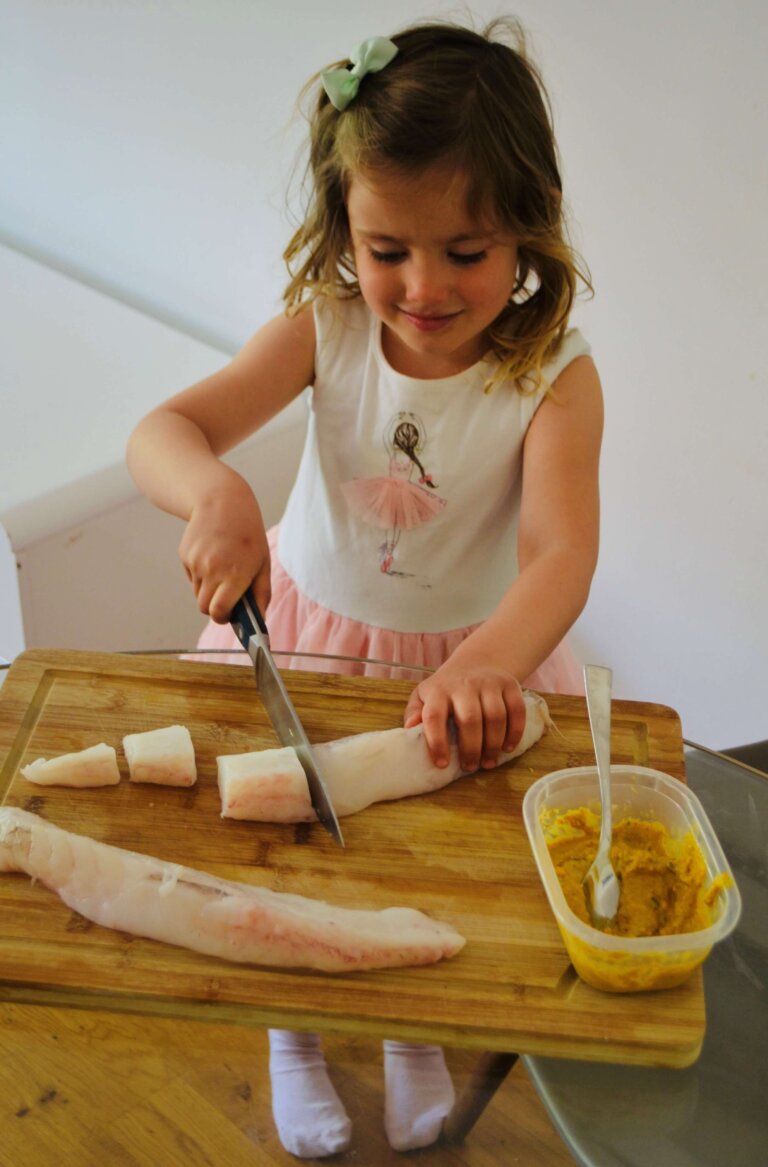 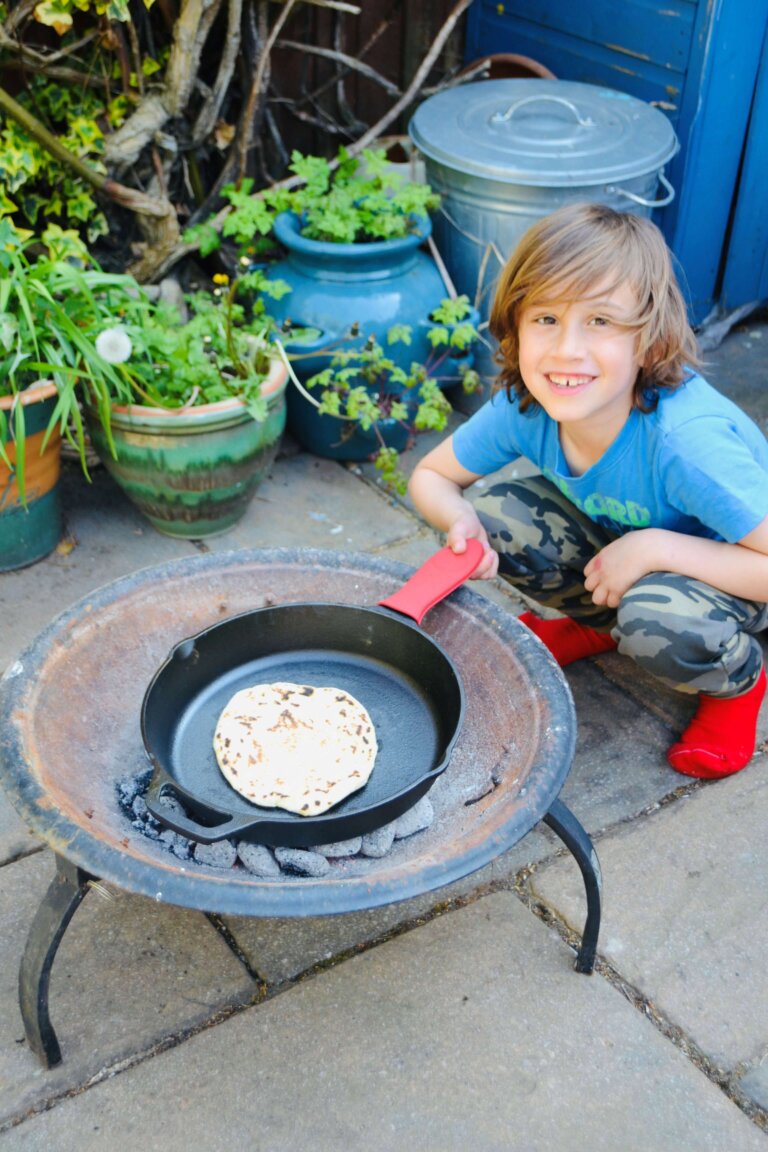 Checking on the lamb curry 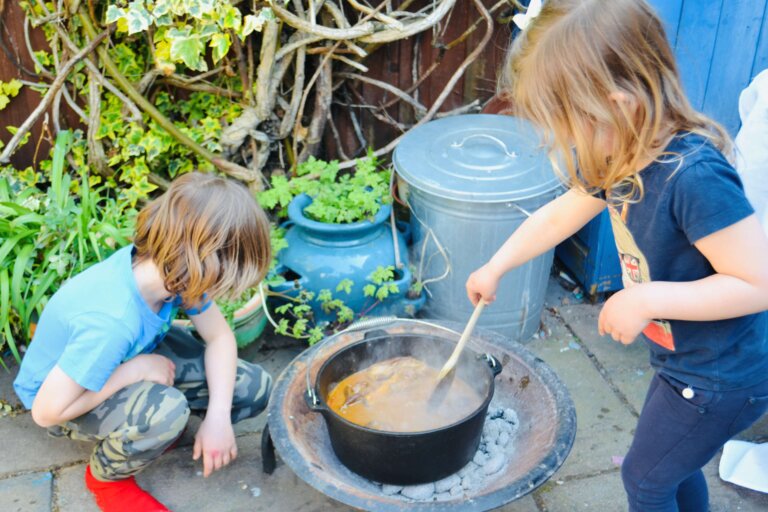 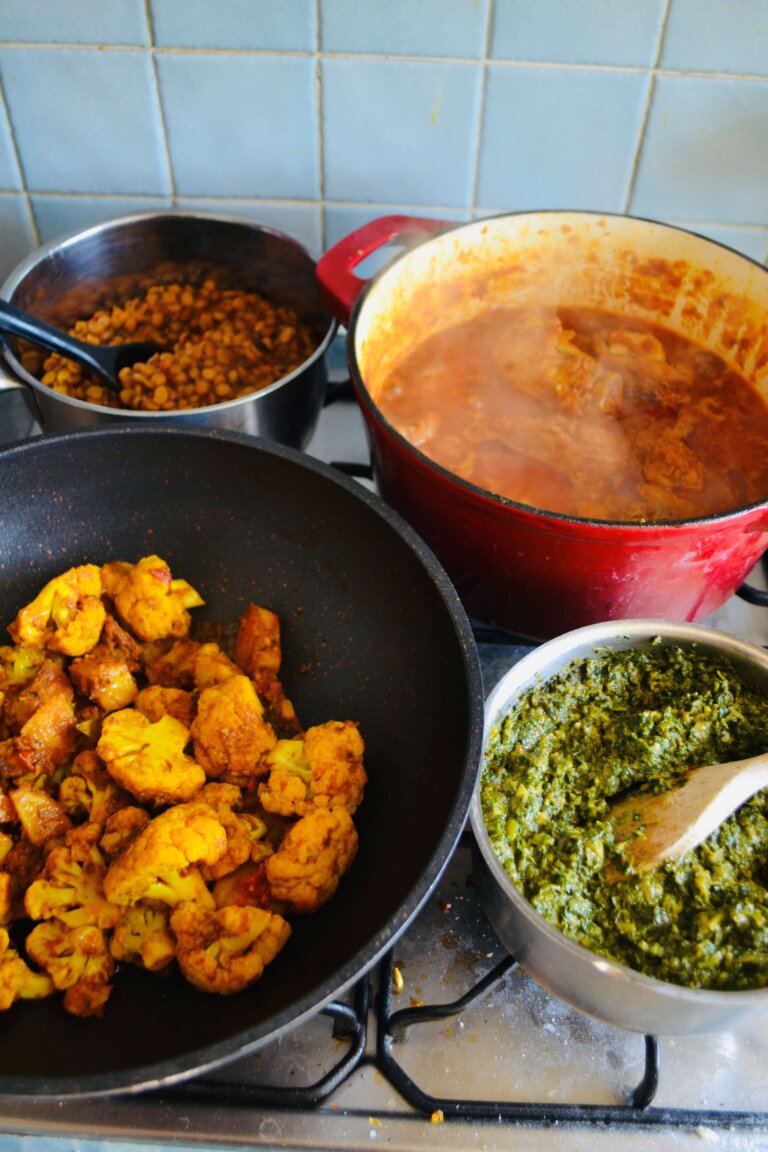 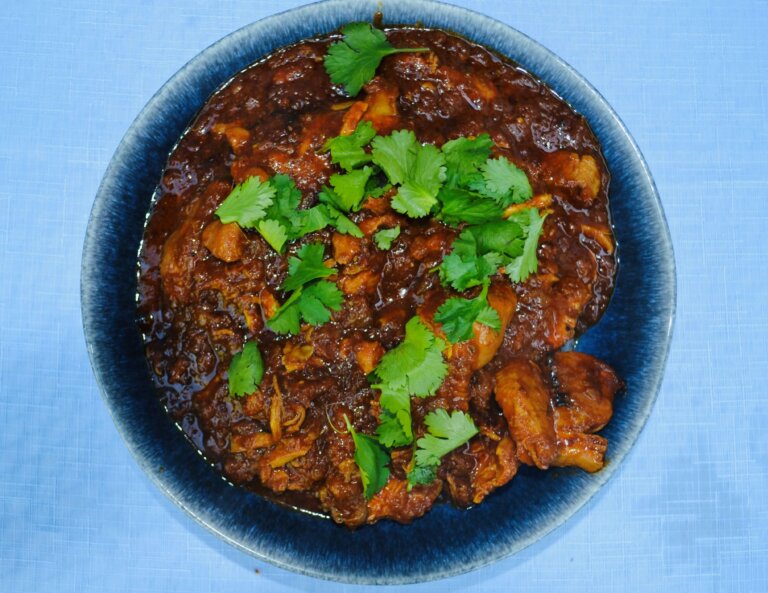 1 whole chicken cut into 8 pieces, on the bone but skin off 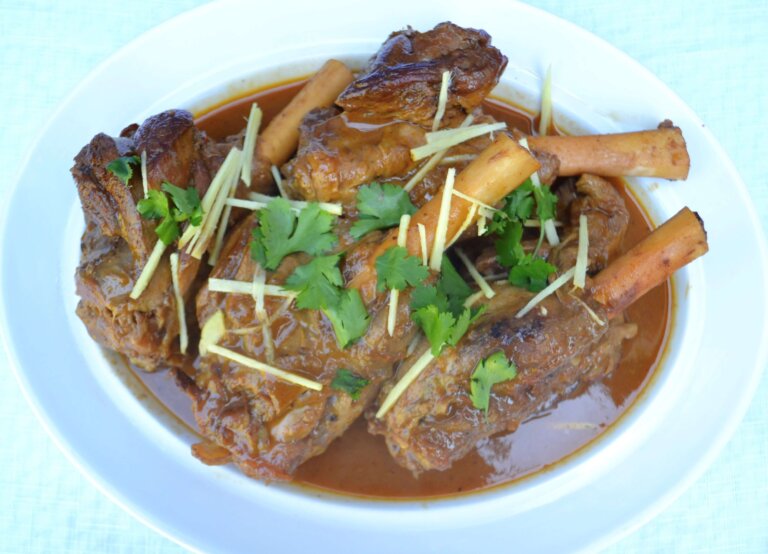 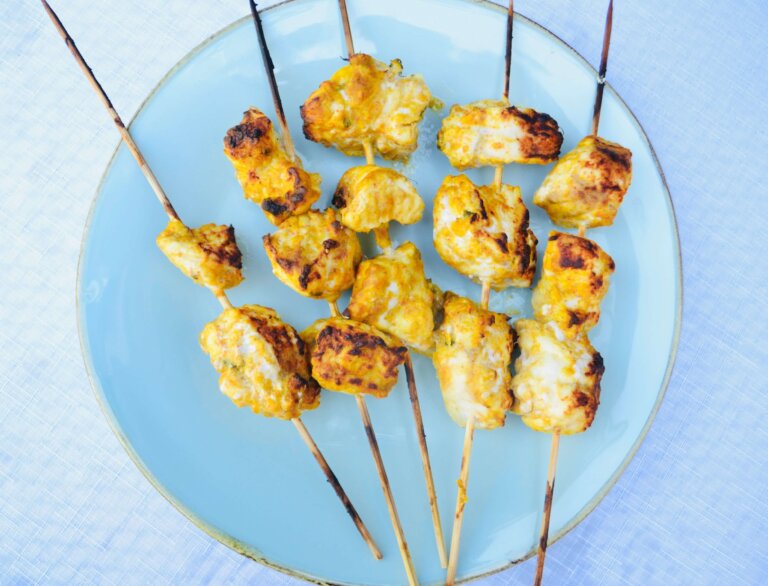 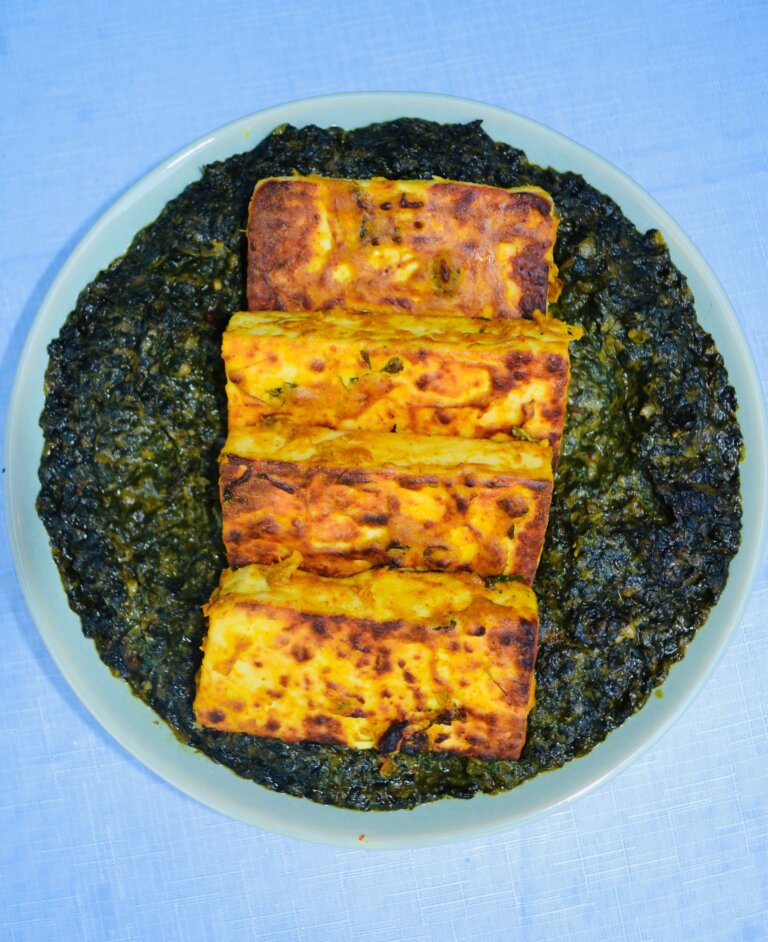 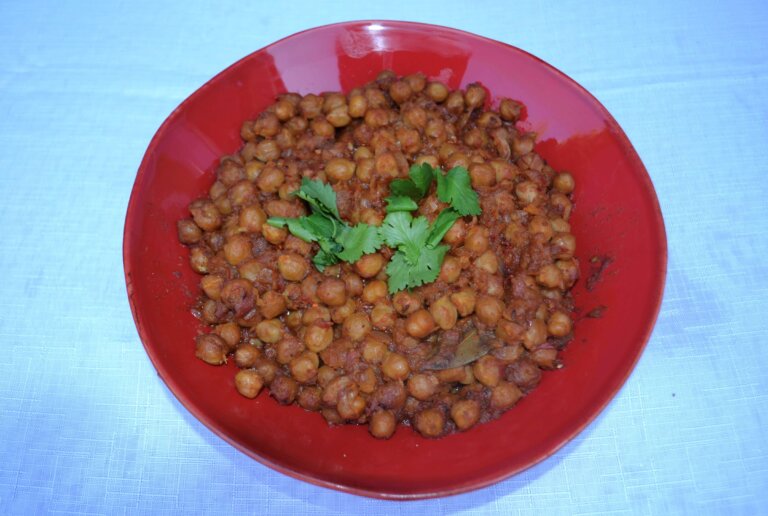 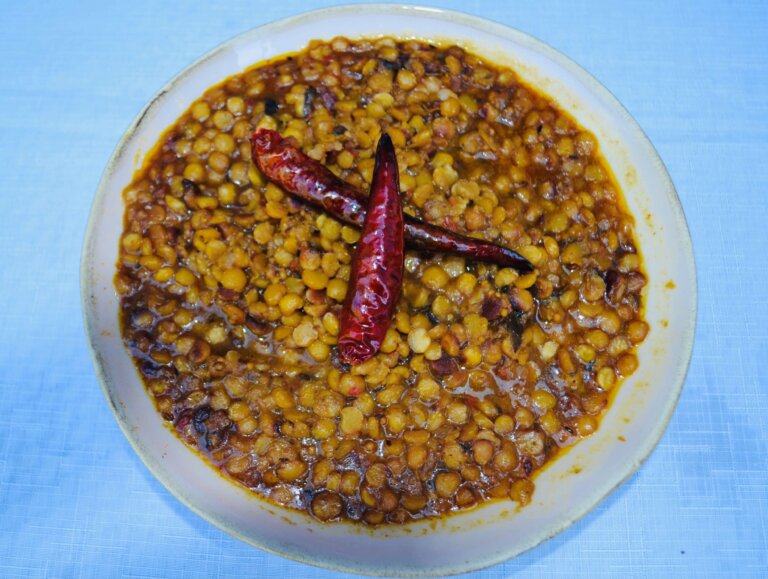 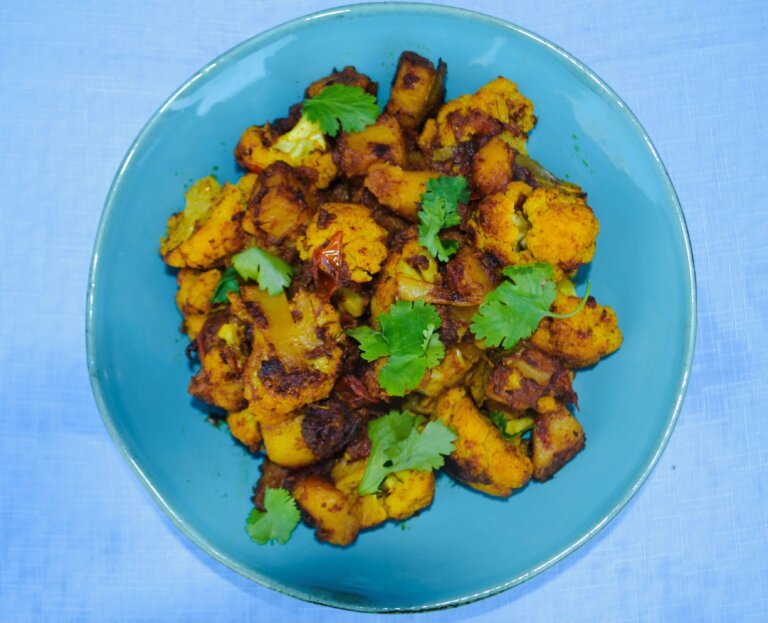 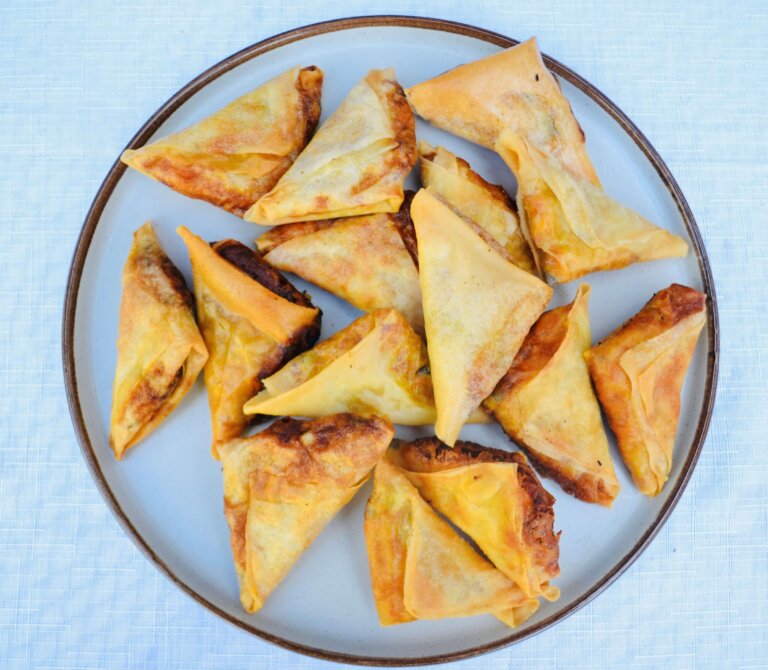 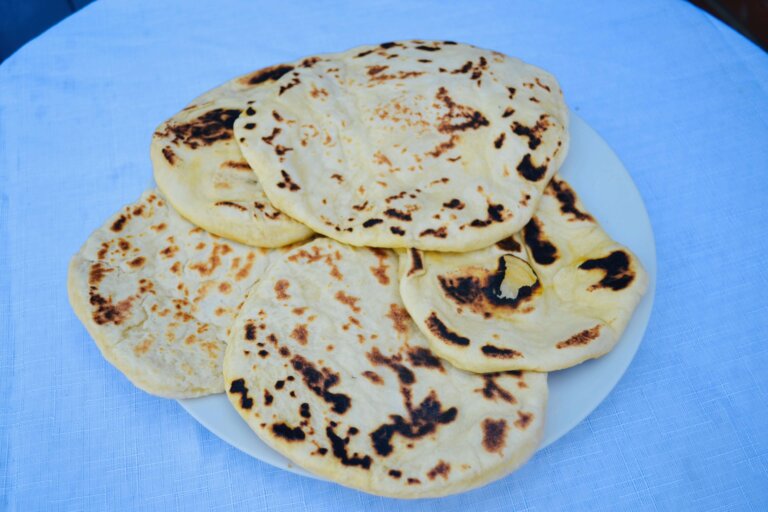 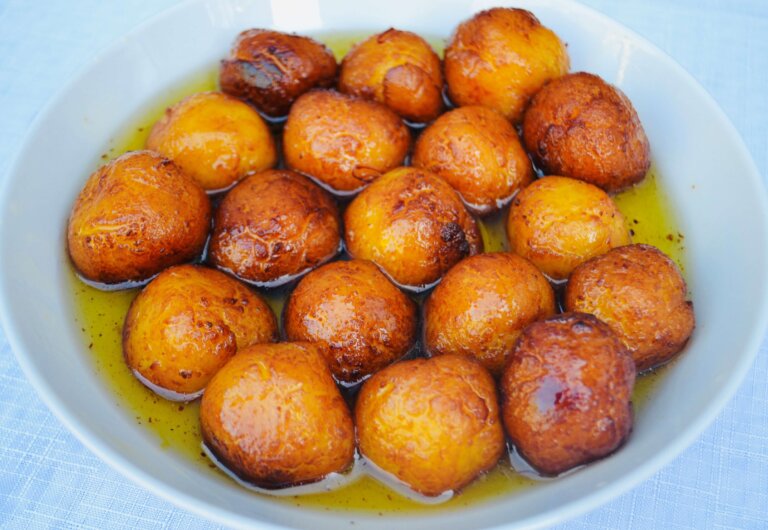 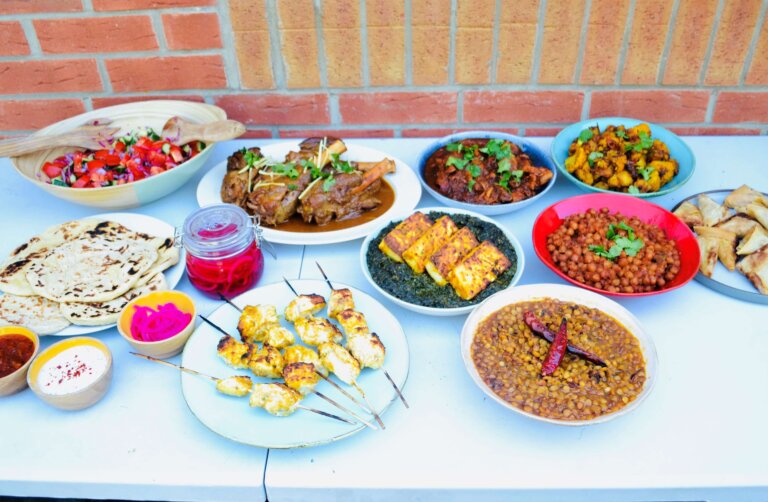 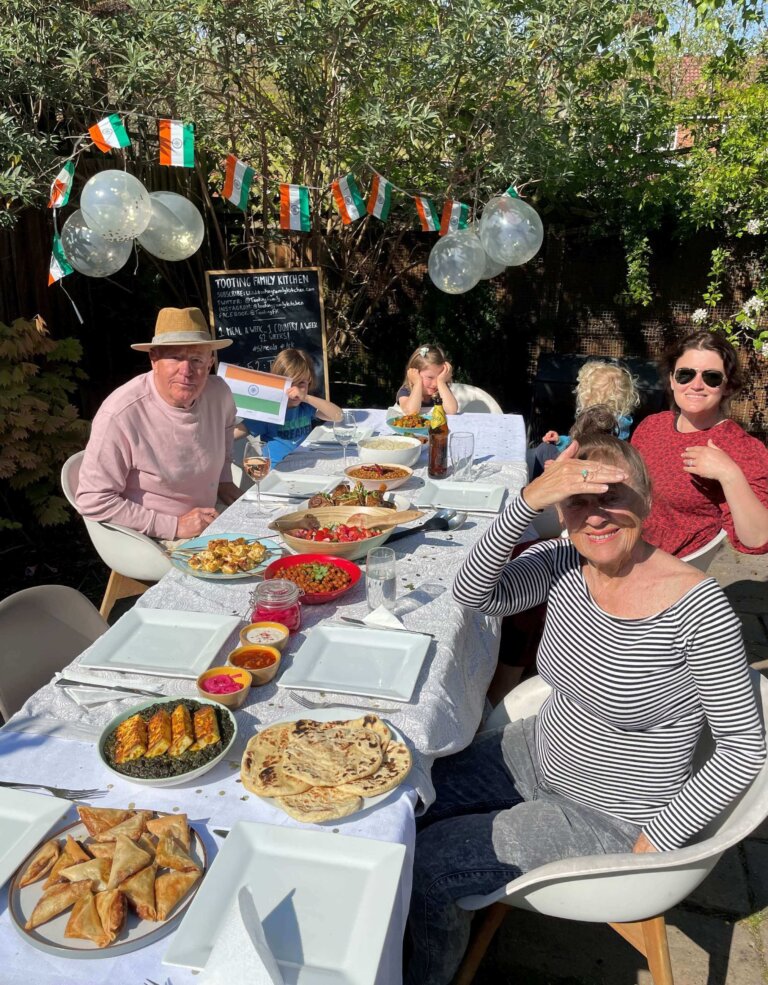 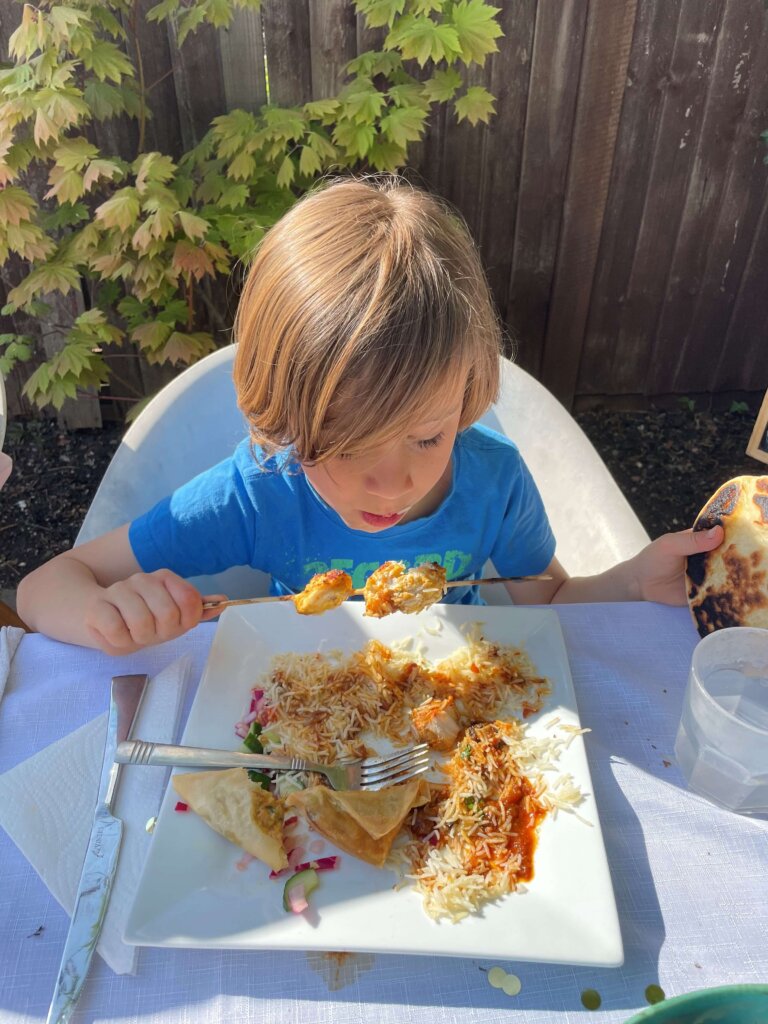 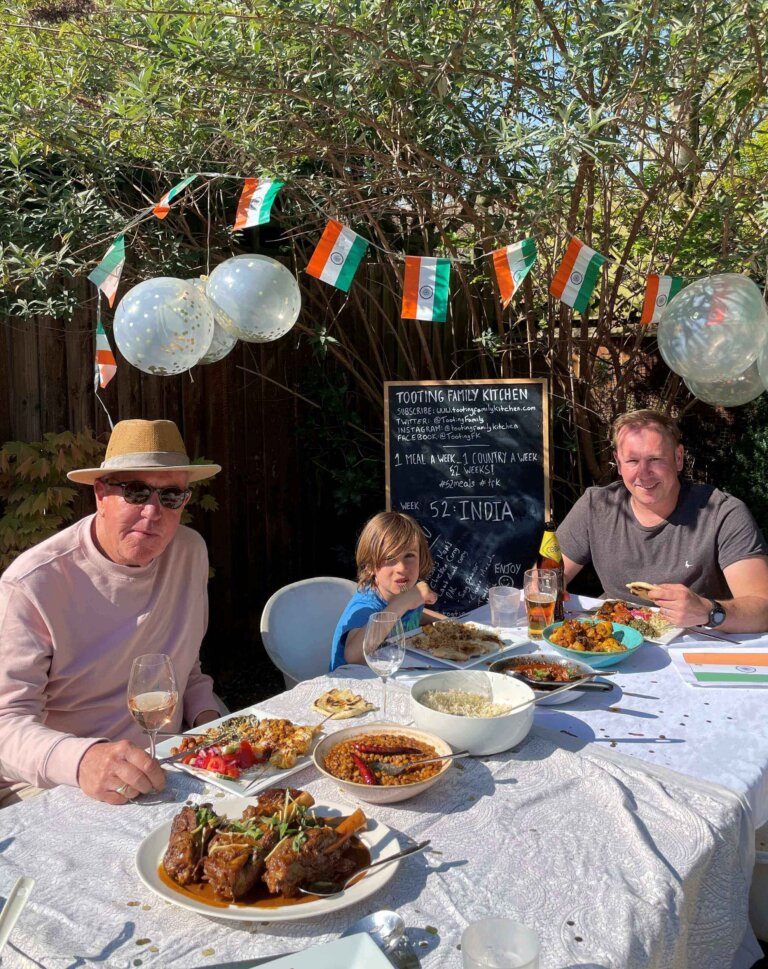 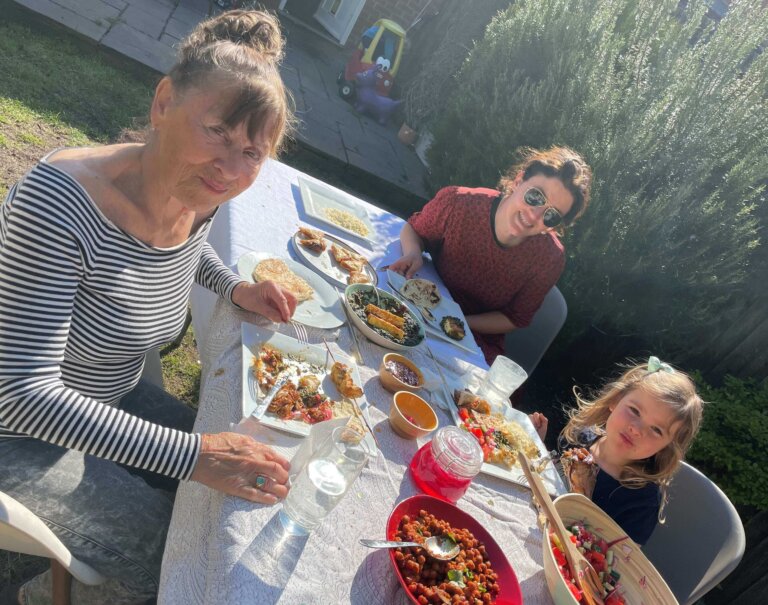 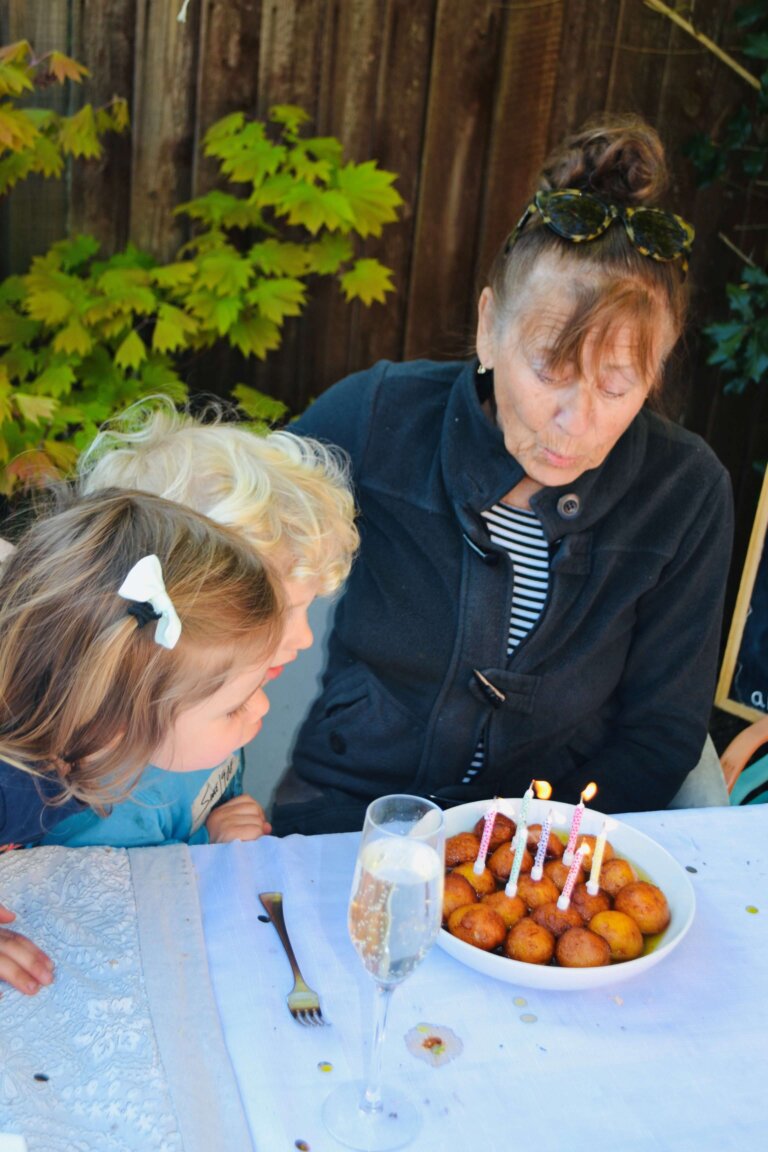 Thank you India, that was epic!

What a way to finish out journey! Please do drop us a line with your feedback, questions or ideas for collaboration – we would love to hear from you!