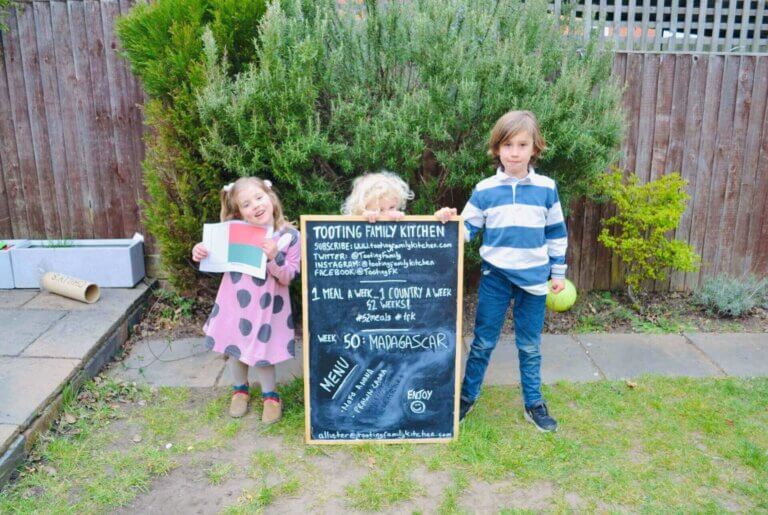 Week 50 and as we near the end of our 52-week culinary journey we hit Africa for the final time to visit Madagascar and cook up a Malagasy meal.

For all the kids out there Madagascar is a real place and not just the setting of one your favourite movies! It is the 2nd biggest nation Island in the world and was formed when it split from India 88 million years ago. A seemingly illusive island despite its size, it took 300,000 years to discover and despite its proximity to East Africa, just across the Mozambique Channel (making it 12 time closer than to Borneo), the first settlers were of Malayo-Indonesian descent. To this day many Malagasy do not typically identify as African, although immigrants from Eastern Africa have now settled throughout the country.

Madagascar is a hugely diverse place and cultural differences are recognisable across the country. There are 18 recognised Malagasy ethnic groups/tribes with varying beliefs and traditions. The island nation was absorbed into French Colonial rule for much of the 20th century and many Malagasy were conscripted to fight for France in World Wars I and II. To this day around 60% of visitors to the country are from France, followed by Germany. Religion is closely followed in Madagascar with the majority identifying as Christian and Sunday mass is often closely observed, however it is mixed with their traditional animist beliefs. A key example of this is Zanahary, that many refer to as the creator God, having collaborated with the earth god Ratovantany to create humanity. Another tradition followed by many is Famadihana, known as ‘turning of the bones’. The bodies of ancestors are exhumed from family crypts and re-wrapped in Fresh cloth before being carried over the heads of the family as they dance to live music around the tomb. It represents a celebration of the life of the dead person, so they don’t feel forgotten by their descendants.

Sadly, many people in Madagascar live in extreme poverty with children being hardest hit, especially in rural areas which is home to approximately 80% of the population and is largely unable to sustain itself. The island nation’s unique geographical location makes it particularly susceptible to cyclones and in addition, ever-increasing water levels have made farming and fishing immensely difficult, for which so much of the population is dependant. Water scarcity and sanitation is a huge problem but one fantastic organization that seeks to give everyone across the globe access to clean water, toilets, and proper hygiene, including those in Madagascar, is WaterAid. Today we donated to support the amazing work they are doing. Have a read about the WASH project here with the option to make a donation: https://washmatters.wateraid.org/blog/integrating-child-health-and-water-sanitation-and-hygiene-in-madagascar

One potential solution to help Madagascar protect its environment and provide a financial boost to the country’s economy is ecotourism. Madagascar is considered to be a megadiverse country and many scientists estimate that approximately 90% of the plants and 85% of the animals found there are endemic, meaning they cannot be found anywhere else on the planet. Due to the fact it has developed its own unique ecosystems since its land split all those millions of years ago, it is considered an eco-paradise for outdoor enthusiasts, although the only animals from the Madagascar movie that actually live there are lemurs (of which there are around 70 different species). If you like to take a walk on the risky edge of the ‘wild side’ however, for a large island Madagascar has very few animals considered dangerous to humans!

Malagasy cuisine reflects the foods eaten by immigrants from Southeast Asia, Africa, India, China and Europe who have settled there over the years. The base of nearly all meals however has remained a dish of rice with an accompaniment, a laoka, which in our case is the prawn curry being the laoka to the coconut rice. Sweet and savoury frittas such as mofo anana, meaning leafy greens bread, are also common throughout the island, especially as a street food and as one would expect from its geographical positioning, Madagascar is a heaven for seafood lovers! We hope we have done Malagasy cuisine justice today. 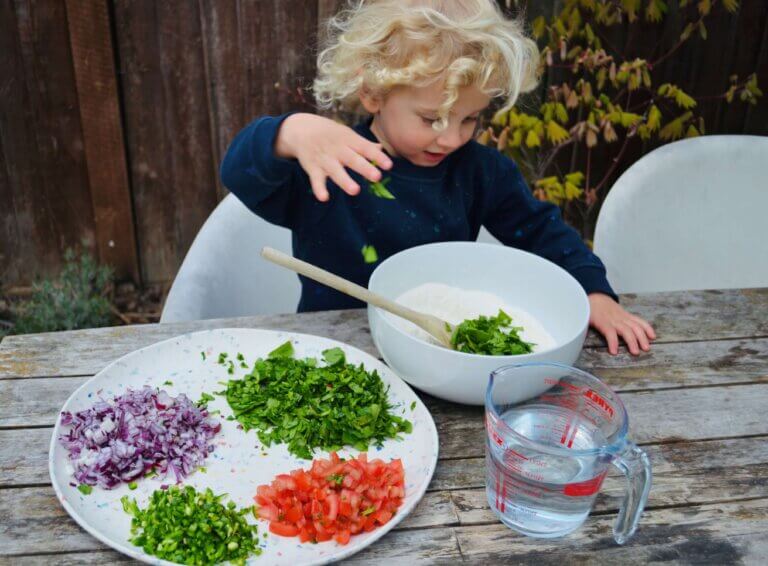 Making it his own! 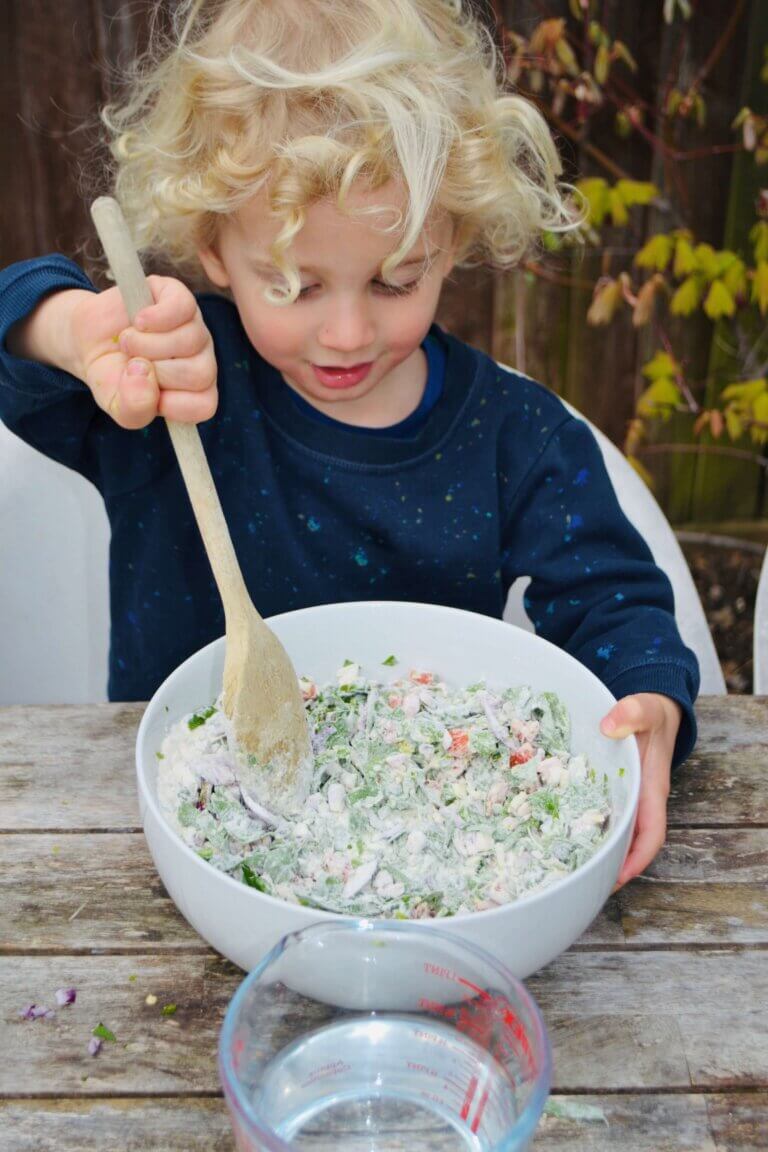 On the hot sauce! 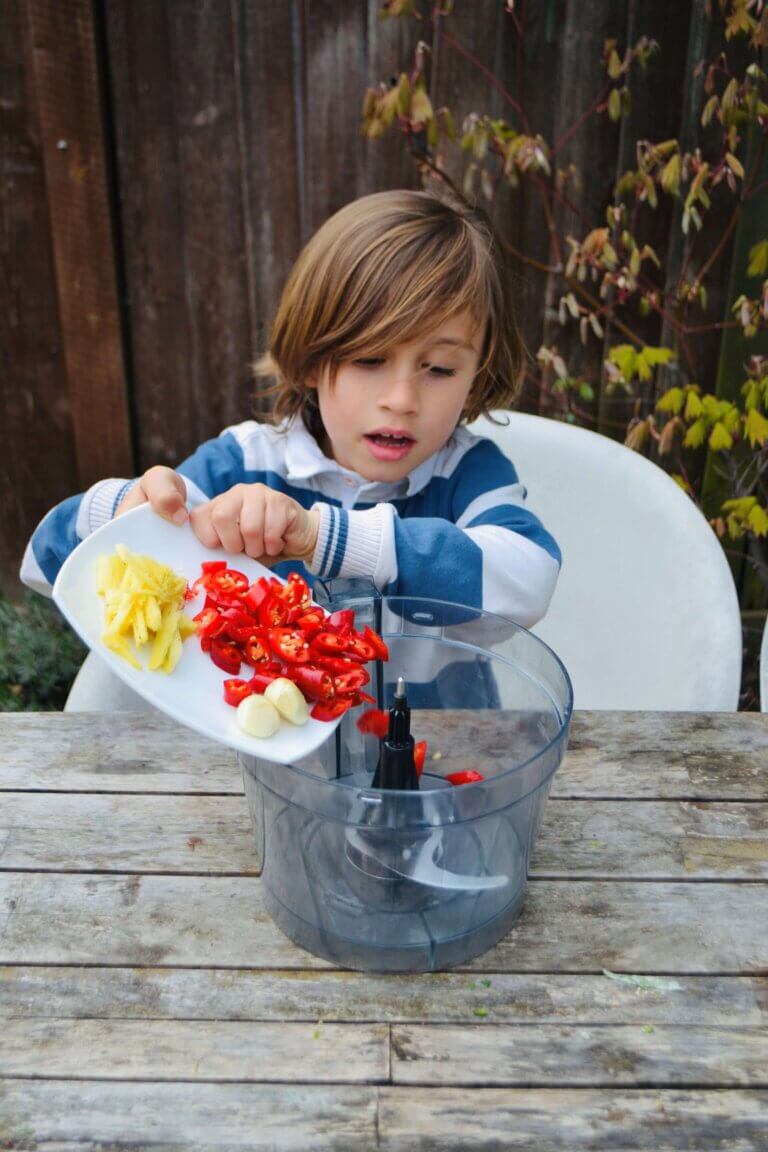 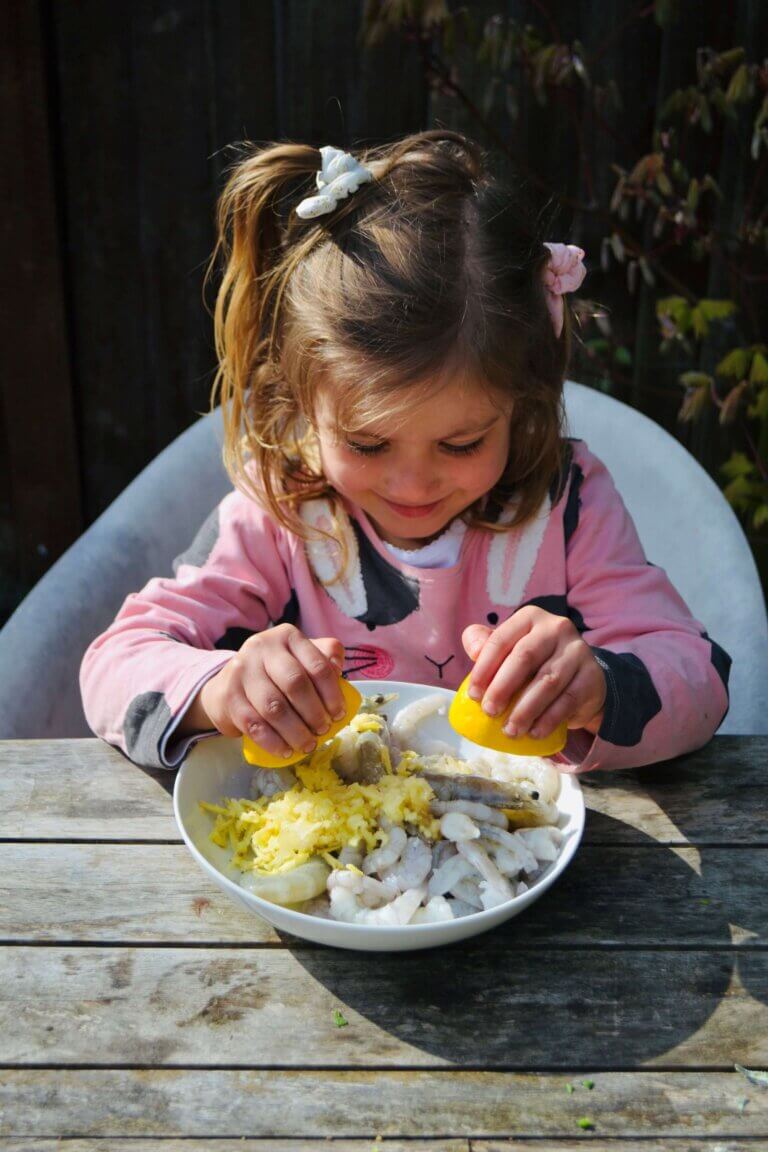 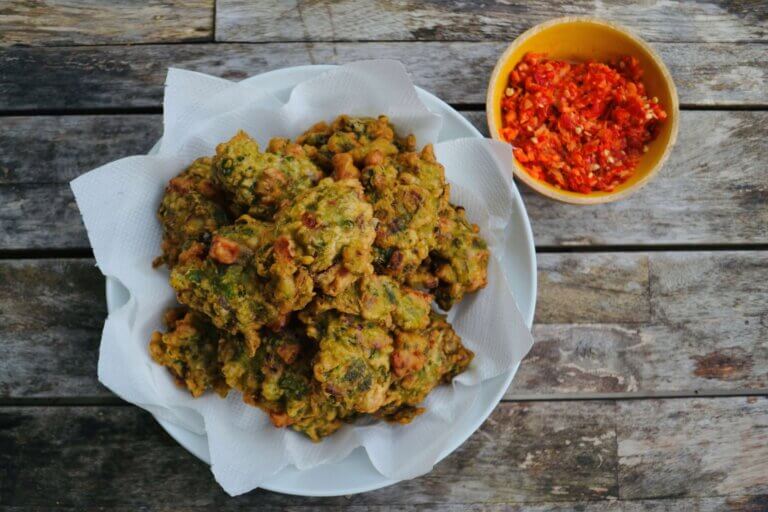 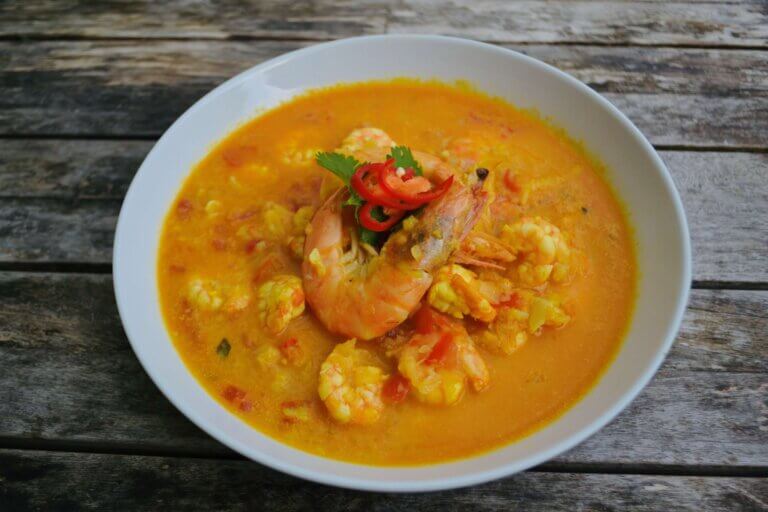 200ml of fish stock or water

Salt and pepper for seasoning 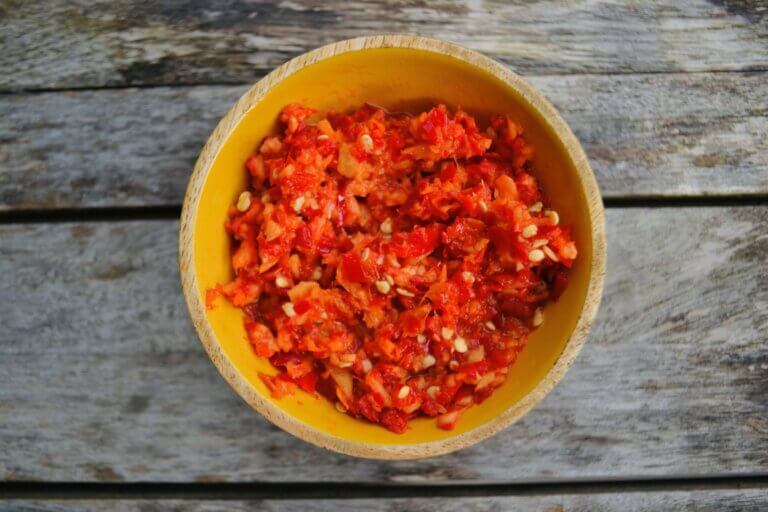 1 inch of ginger, peeled and sliced

1 tbsp – 10 tbsp depending on your preferred texture/consistency 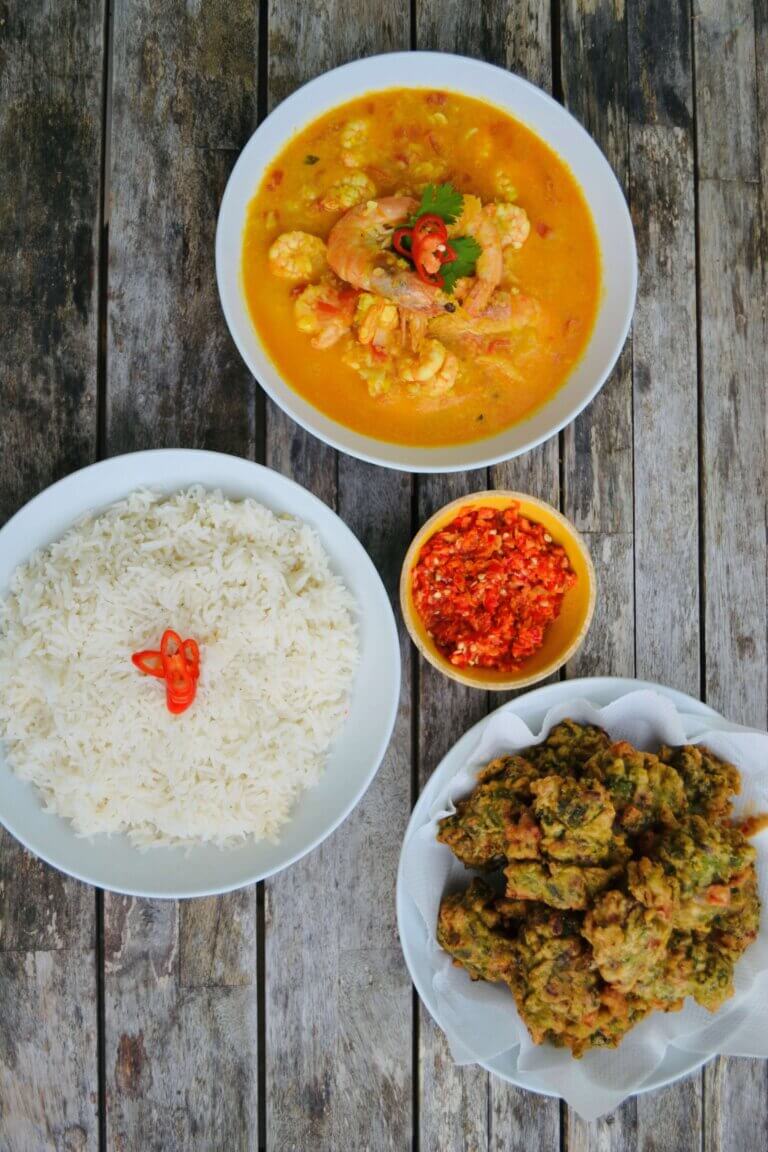 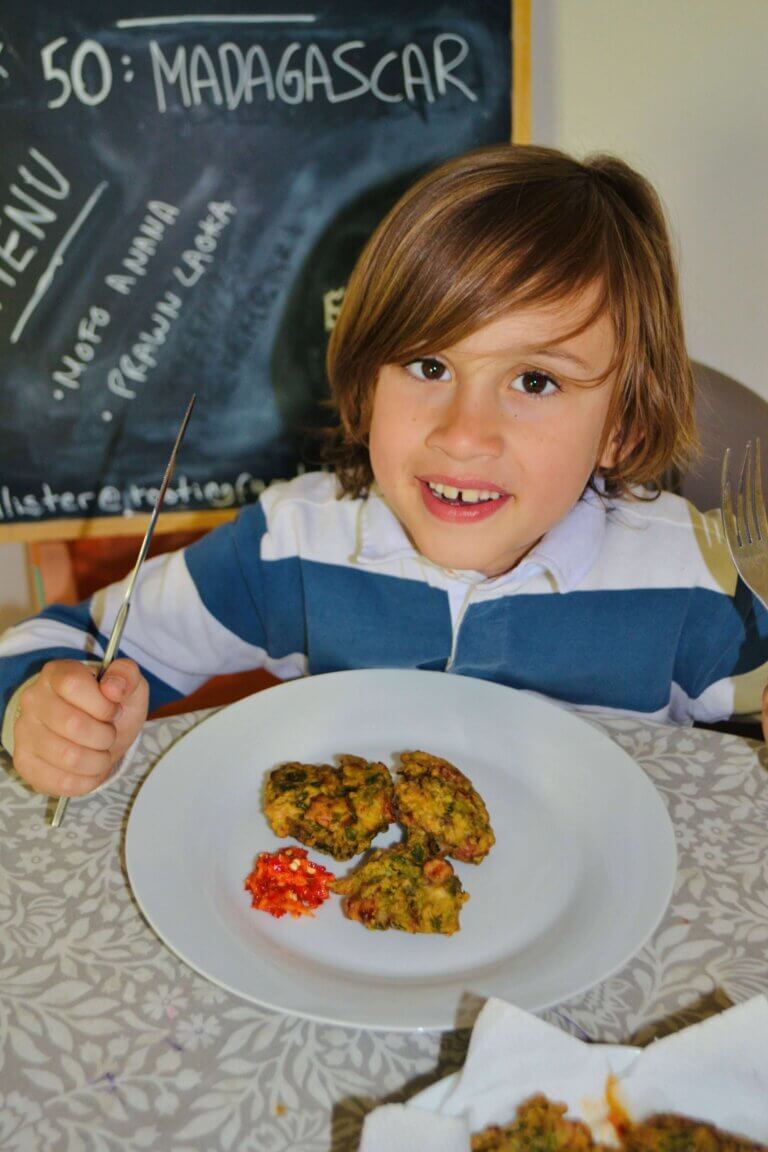 Straight for the prawns 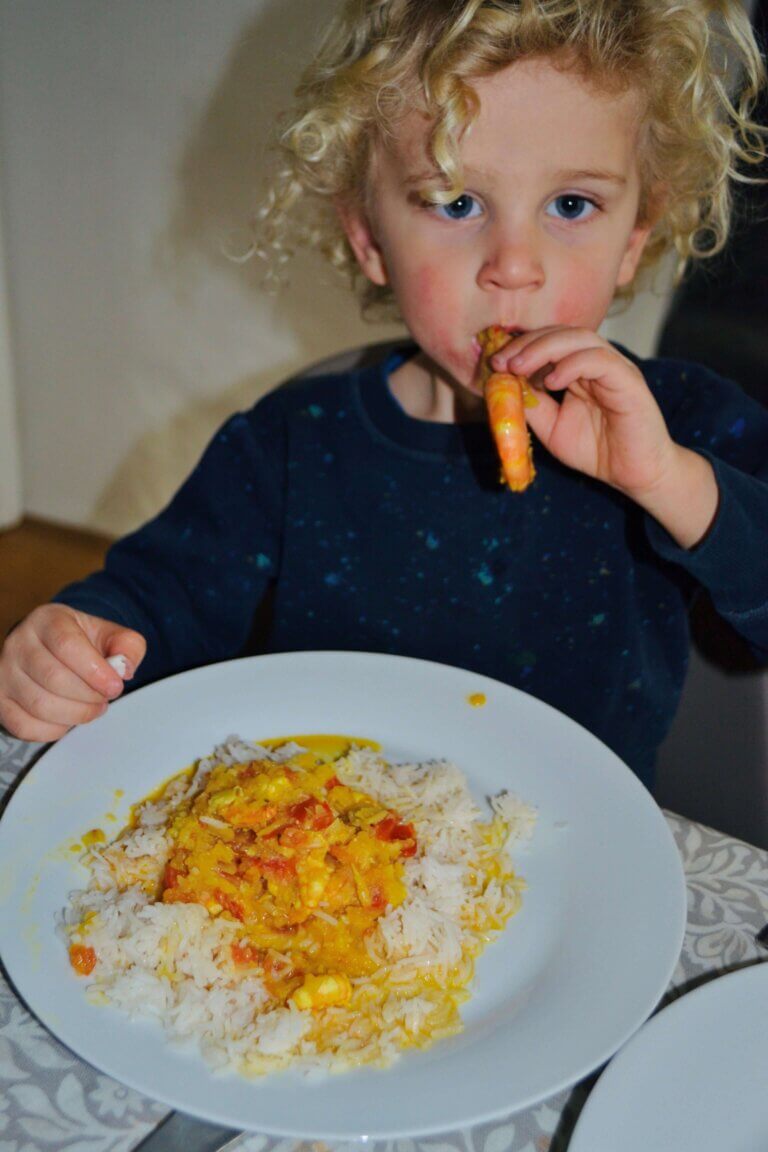 A hit with the Head Chef 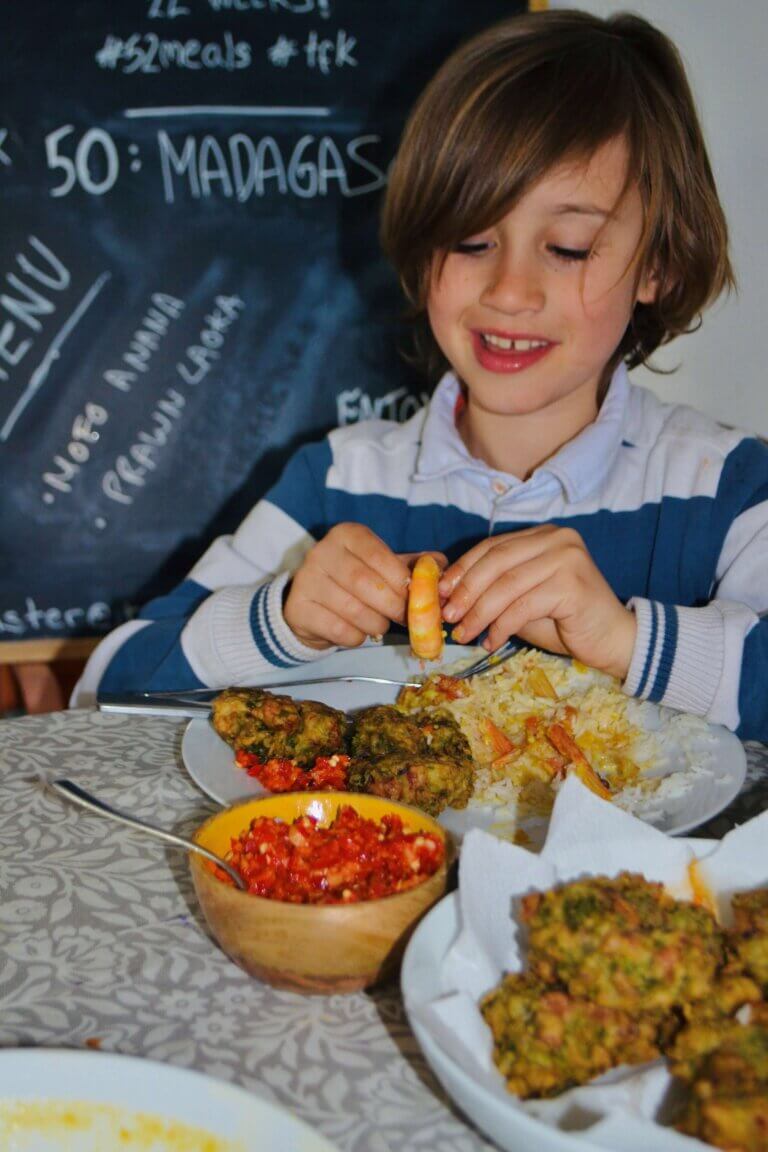 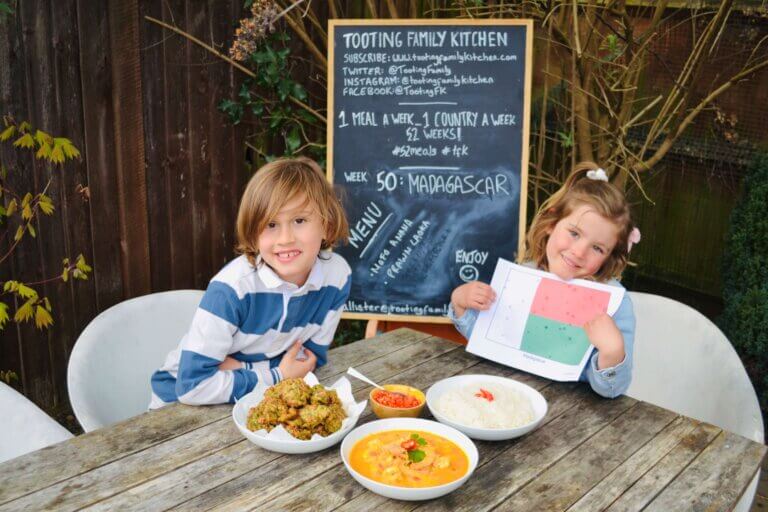 Thank you Madagascar, that was epic!

Next week we are excited to head to Peru!!! … please don’t forget to SUBSCRIBE (scroll to bottom) & SHARE and if you have any International Food ideas or recipes from around the world you wish to share please do drop us a line