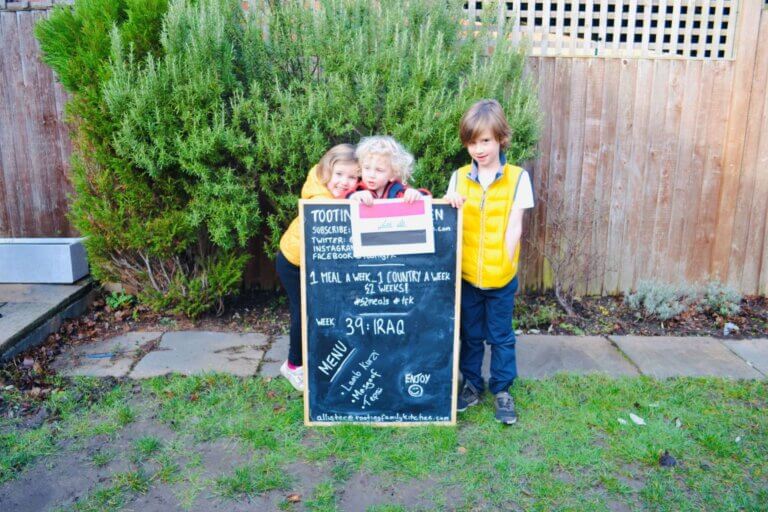 We have been excited to return to the Middle East for Week 39 of our 52 weeks Challenge and particularly excited to visit Iraq, often called the cradle of civilization, being the birthplace of the complex urban centres that we now refer to as our cities.

Iraq has a rich and complex history largely due to its positioning between the Tigris and Euphrates Rivers. The region of Mesopotamia, which roughly equates to modern day Iraq, was the home of great empires including the Babylonians, the ancient Sumerians and the Assyrians and latterly the Greeks, the Romans, the Persians and Ottoman Turks. Its modern history has not gotten much less complex since it passed from Ottoman to British control before gaining its independence in 1932. In 1958 the Monarchy was overthrown, and it became a Republic. Soon after, the world witnessed the rise to power of Saddam Hussain followed by the Iran/Iraq War, the invasion of Kuwait, the Gulf War and finally the Iraq War and its ongoing aftermath along with the rise of ISIS in the region.

Today Iraq is essentially 2 different countries, representative of the 2 main ethnic groups that live there (the Arabs and the Kurds), with Kurdistan autonomy now being enshrined into the new Iraqi constitution. Although Iraq’s population is approx. 96% Muslim it is important to note that they follow two distinct traditions, Shia and Sunni Islam. The vast majority of the population are Shia, although historically the rulers have been Sunni which has further added to division within the country.

Having spent a year in Iraq it is clear to see what a beautiful country it would have been (and in many ways still is) without the decades of internal and external conflict it has endured and the subsequent drain on its economy and resources. From the beautiful mountains of Kurdistan (where it is possible to go skiing), to the barren desert that covers half the country, to the marshlands of the south, its territories are as diverse as its population. There was a time when Basra was referred to as ‘Venice of the East’, due to its meandering rivers and canals and Baghdad was a modernizing city with plazas, boulevards, and public pools. The ‘Marsh Arabs’ continued their centuries old way of life in the southern marshes, the Kurds lived relatively happily in the north, enjoying their unique culture, as did the dwellers in the western desert, with the country living in relative harmony.

It is a country of real extremes and from experience I can tell you that I have been very, very hot, very very cold and very very wet. Temperatures can reach 50 C but temperatures of -17 C have also been recorded. It has a wet and a dry season and between November and April the country can get 40 inches of rain and sandstorms that are visible from space are not uncommon. In 2015 an exceptional weather phenomenon even created a river of ice flowing through the desert!  If you can cope with these desert conditions bear in mind it is also home to the saw-scale viper, which many scientists believe to be the world’s most dangerous snake and if you consider cooling off in a river be careful, sharks are known to swim up-stream from the Persian Gulf!

The Iraqi’s were certainly a clever bunch and some of the world’s most important inventions such as the wheel, maps, the calendar, time and even the first schools originated there. It is a country of strong traditions and it can still be common for brides and grooms to marry their cousins although arranged marriages are becoming rarer. Families are generally large and live together under one roof which grows over time. Their hospitality is unrivalled regardless of their wealth and if someone admires an Iraqi’s possession it is common for them to insist upon that person taking it…if you are seeing an opportunity here be aware, it can be considered rude to heap praise on someone’s property for this very reason!

Iraqi food is deeply routed in dozens of ethnic groups entwined throughout its history. One thing that we are likely to be familiar with here is liquorice which is a distinctive plant grown in Iraq – a degree of separation is required however from a schoolboy in shorts chomping away on ‘all sorts’ from a white paper bag to the warriors of the region’s ancient armies that found chewing it kept them from getting thirsty! The Iraqi’s love their seafood which is strange for a country with only 58km of coastline on the northern Person Gulf, and their national dish is Masgouf which is butterflied fish, usually carp, which in Iraq can grow up to 300lbs and swims (with the sharks) up the rivers and marshes from the Persian Gulf. Quzi, a celebratory dish which often involves stuffing an entire lamb and serving on a bed of rice is the ultimate way to entertain one’s guests and Tepsi baytinijan is a popular aubergine-based casserole that is just delicious. One thing is important to remember when dining in Iraq, whilst it is not necessary to use cutlery… don’t ever eat with your left hand!

Checking out the ingredients! 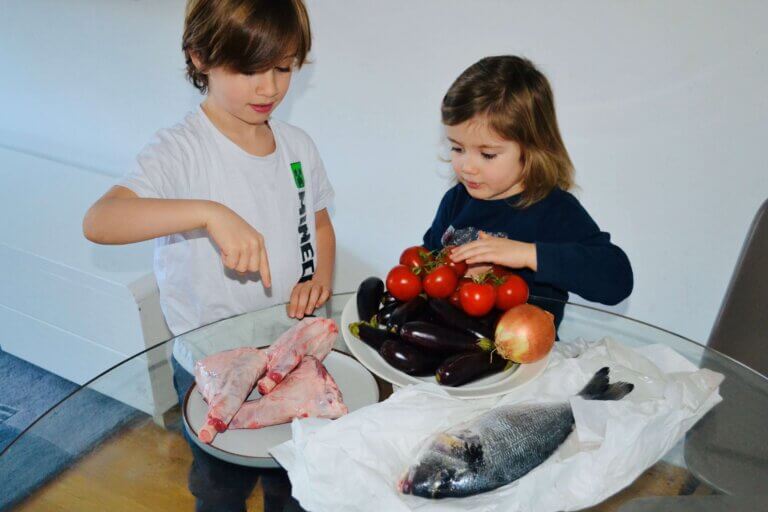 Get the marinate on! 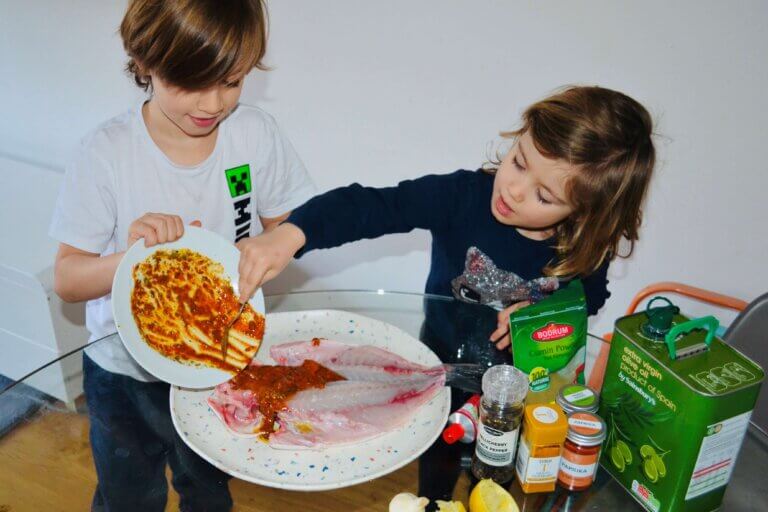 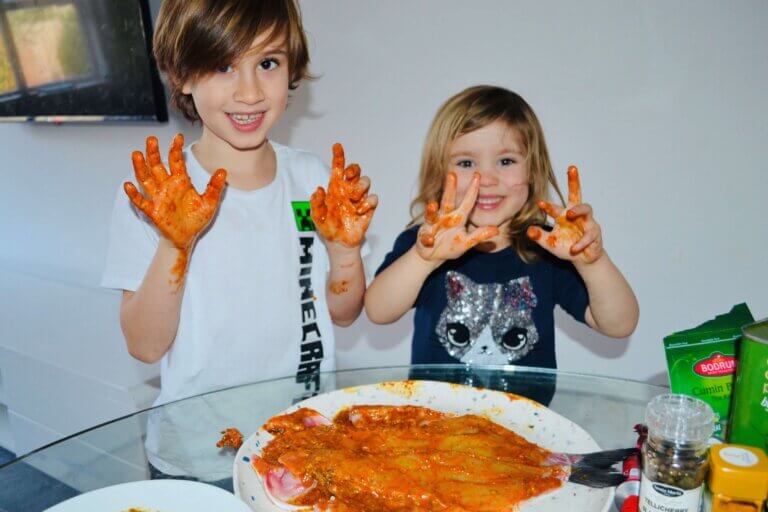 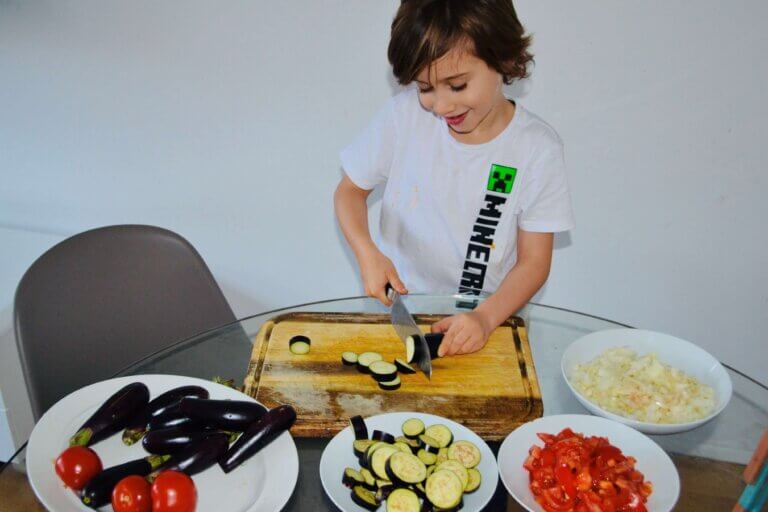 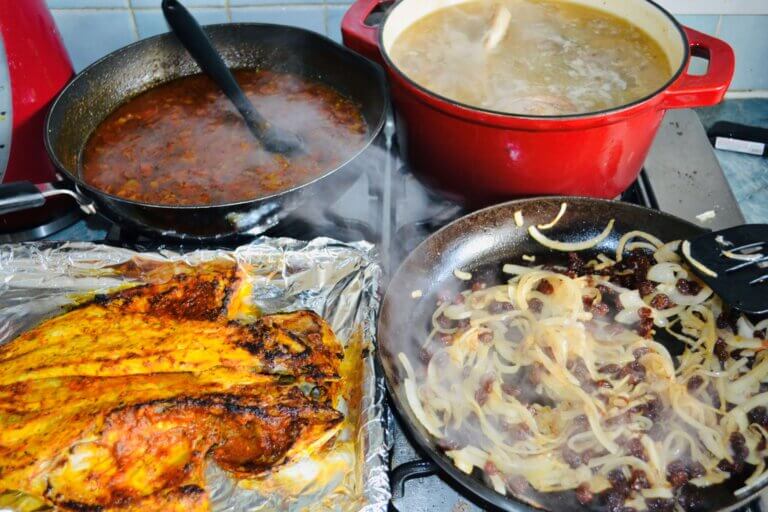 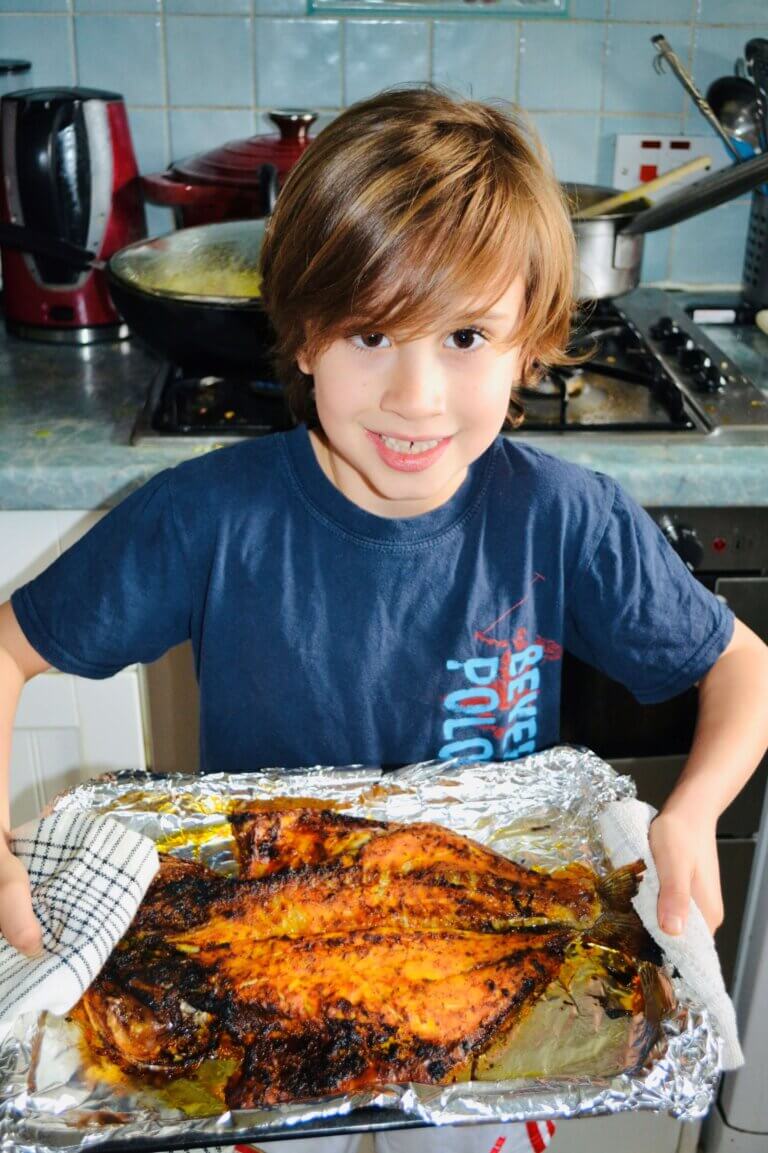 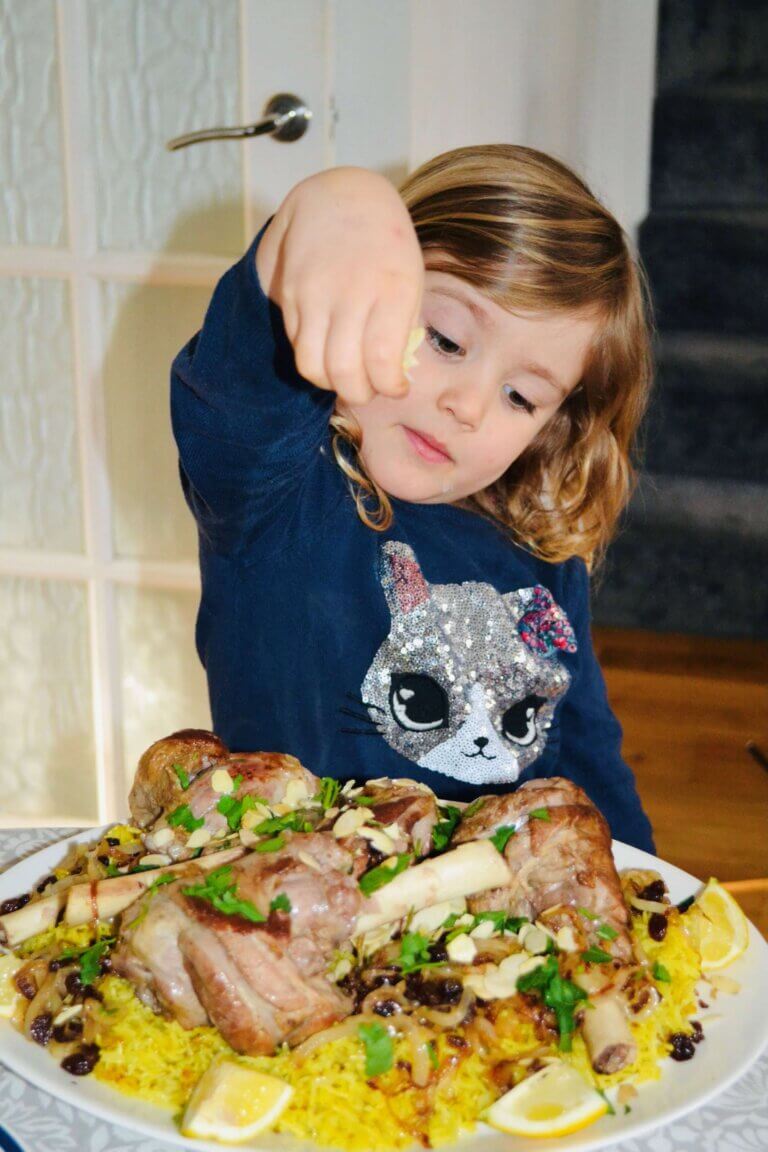 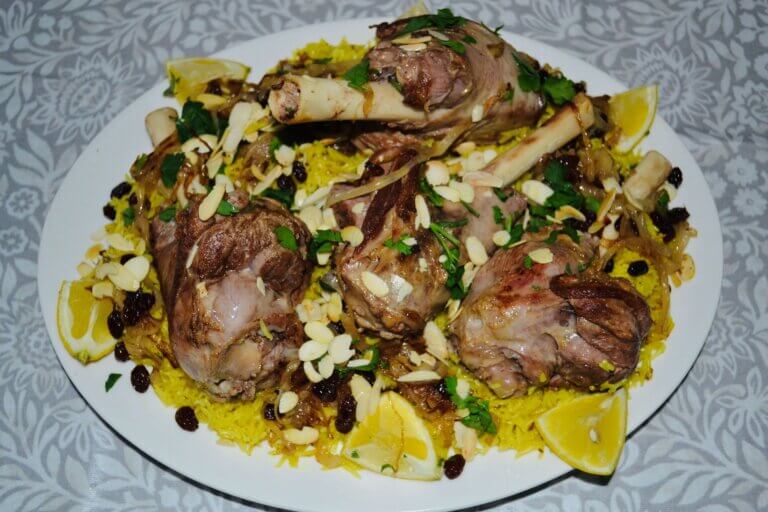 2 cups of stock from the lamb 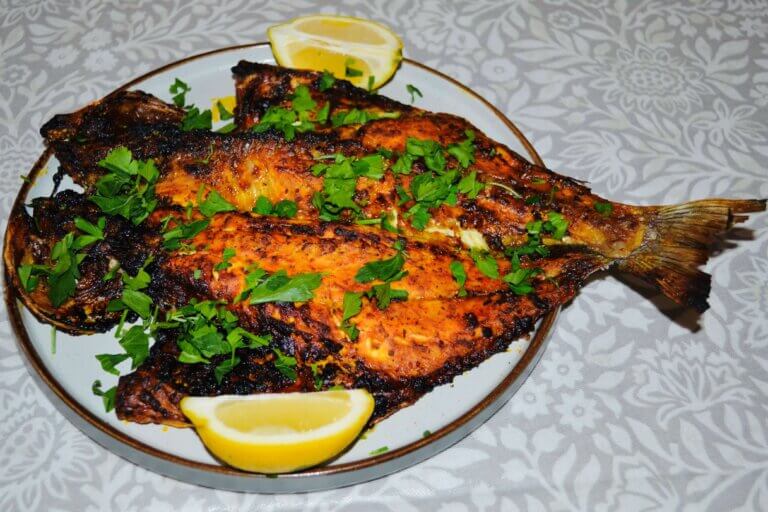 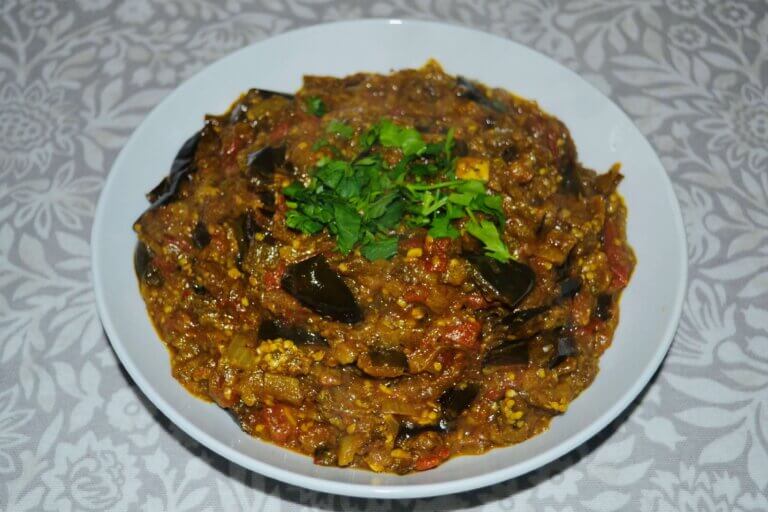 600 aubergines (we used baby ones), sliced

2 cups of water or vegetable stock 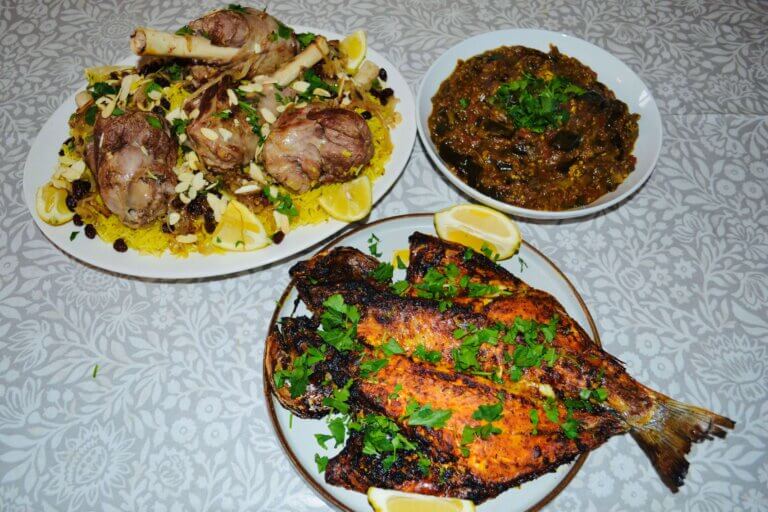 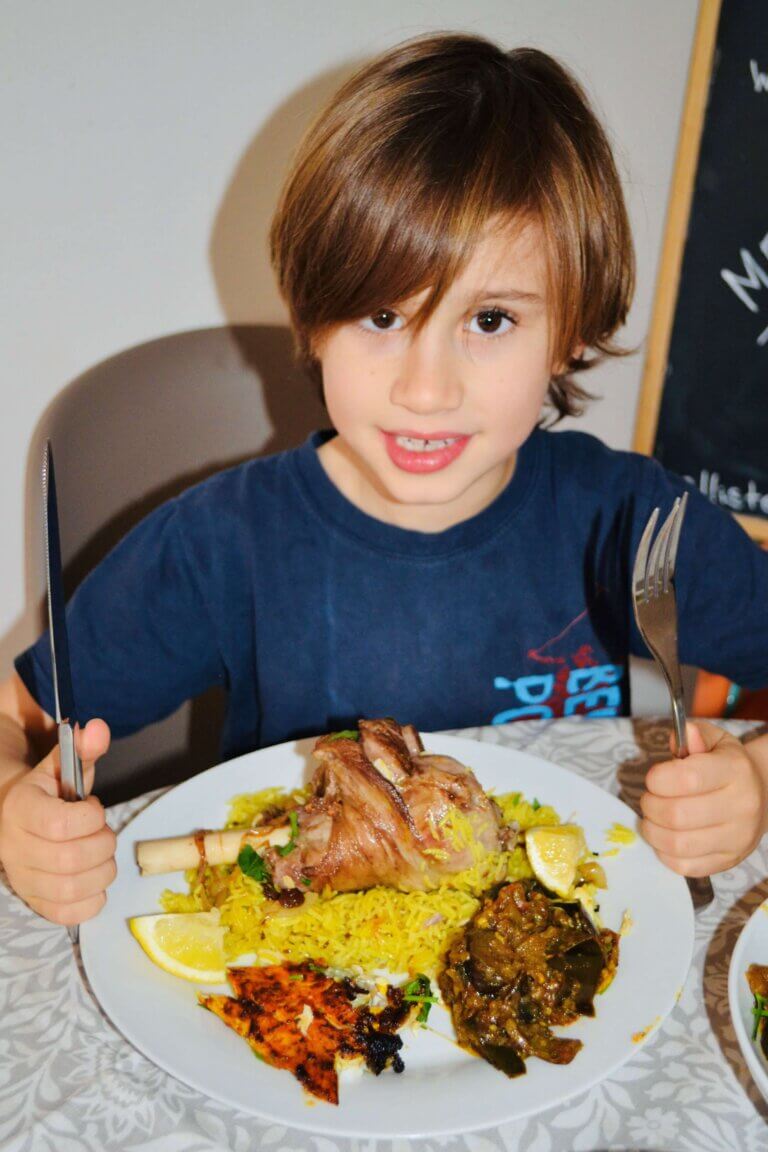 Who needs a knife and fork?! 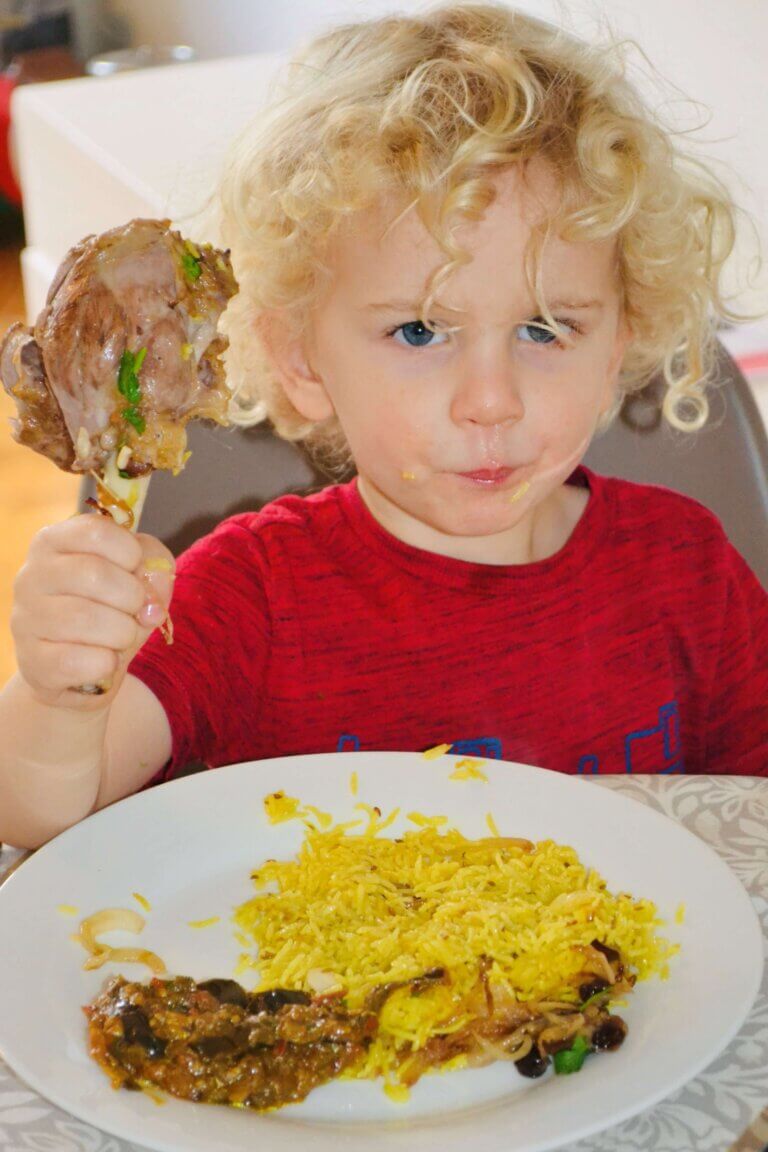 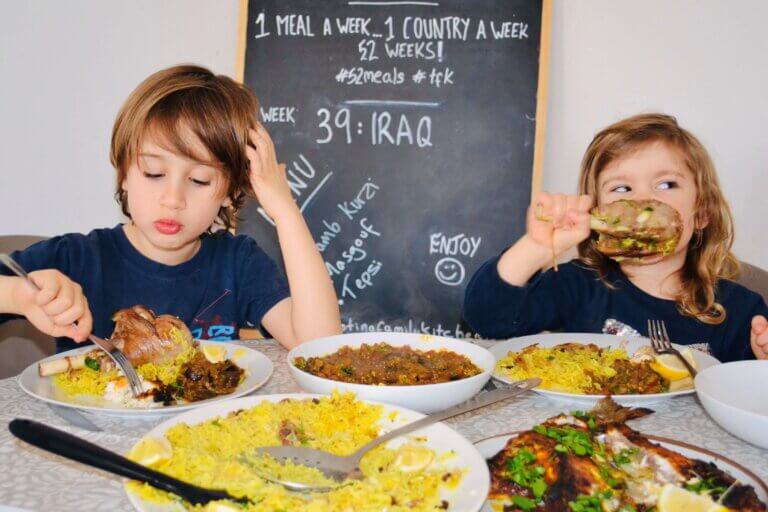 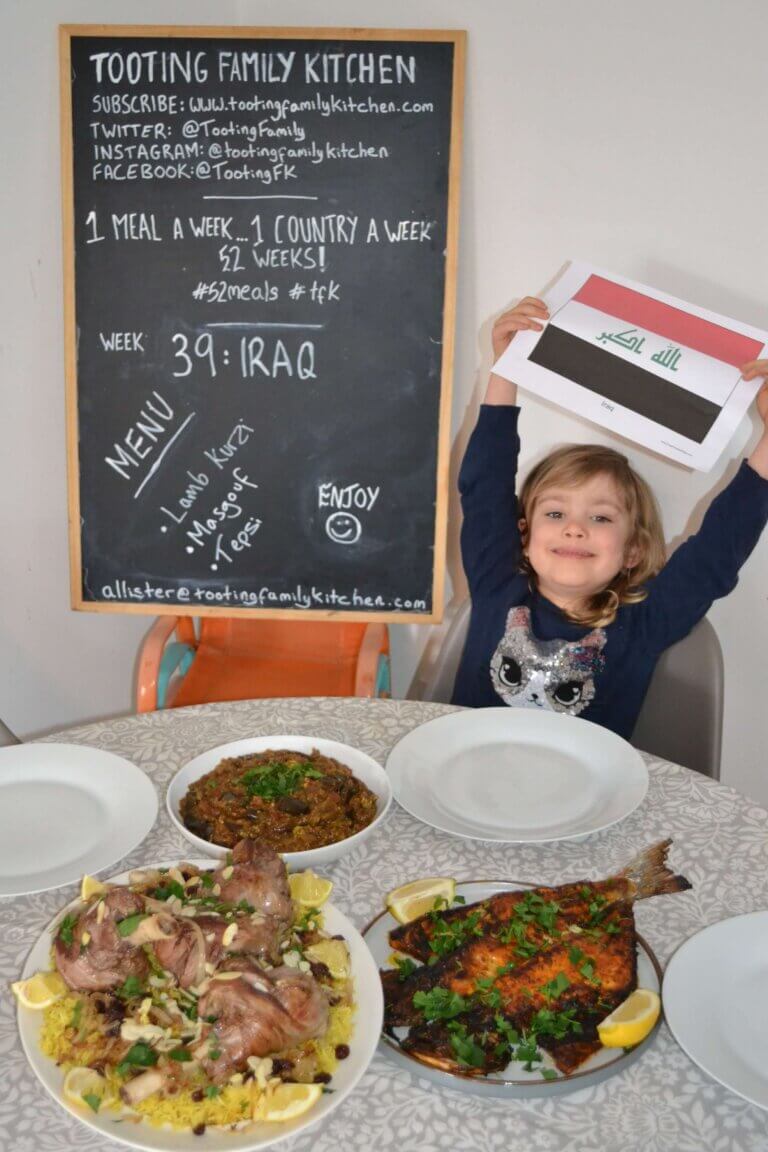 Thank you South Korea, that was epic! Can’t wait to explore more of your cuisine.