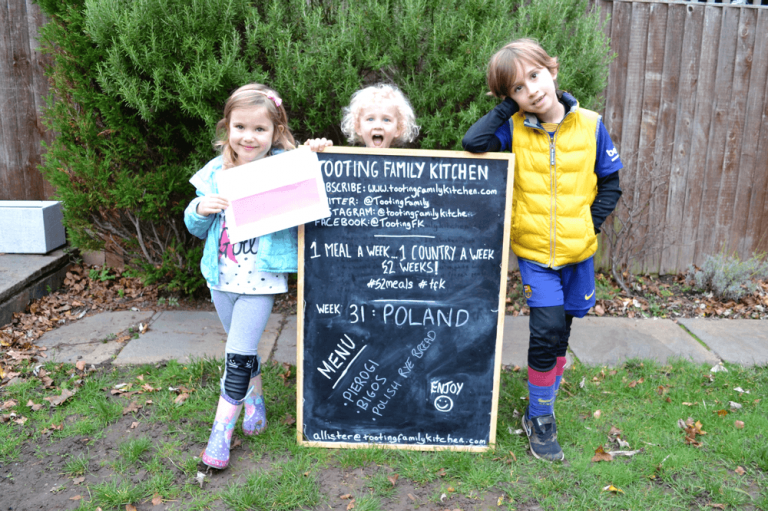 Thank you for joining Tooting Family Kitchen for Week 31 of our 52 Meals Challenge. If you are hitting our blog for the first time, welcome! We are on a culinary journey, exploring different cuisines from around the world to get kids cooking and learn about different International Cuisines and Cultures – celebrating Diversity through Food.

This week we head to Poland which has caused a lot of excitement in our household, particularly from our 4 year old daughter Abigail. A year ago she was very upset to learn that her best friend Martyna would not be accompanying her from nursery to primary school as she would be going to live in Poland where her parents are from. It’s fair to say Abigail’s relationship with ‘silly’ Poland got off to a rocky start, but food brings people together, all is forgiven and we have been reminded many, many times this week by a joyous Abigail, that Martyna is in Poland….so Martyna, this is for you from Abigail! 😊

There are approximately 800,000 people of Polish nationality in the UK, making them one of the largest ethnic minorities in the country with the Polish language being the second-most spoken language in England. Where we live in Tooting there is a big Polish community and you are never far away from a Polish supermarket, restaurant or Polish conversation, which just adds to the amazingly diverse and vibrant feel to this corner of South West London. My Dad is a big fan of Polish food (especially Polish Tripe Soup!) and we are regulars at Wroclow (or were pre-Covid), a great little authentic Polish restaurant sitting between Balham and Tooting. They get a lot of business from the Polish Church across the road at which you can always guarantee a full house – 90% of Polish claim themselves to be ‘believers’ compared to a mere 30% in the UK!

So its fair to say that we are very familiar with the Poles in the UK, but what about Poland? Ryanair is doing their best to educate us and if there was an award for an airline taking big groups of people to towns and cities whose names they can’t pronounce they would surely be the winner. For a mere €11.4 one can pop over to such destinations as Olsztyn-Mazury, Bydgoszcz, Szczecin and Rzesow and check out what this massive country has to offer. Unfortunately it is sometimes the hardships the Polish people have endured in their often tragic modern history that is at the forefront of people’s minds, but this mustn’t overshadow the amazing achievements that have been accomplished in this country, or the beauty that comes from its scenery, architecture, culture and traditions, along with its food and drink of course!

There are 16 World Heritage Sites in Poland and Krakow’s historic centre was on the very original list of 12, compiled in 1978. In fact it was one of only 2 cities on the list, the other being the City of Quito in Ecuador. The stunning scenery is endless from the breath-taking High Tatra Mountains and the wilderness of Białowieża National Park with its free roaming bison, to the wild and windswept dunes of the Baltic Coast, home to Europe’s longest pier. Poland is considered to be the most religious European country with 86% identifying as Roman Catholic. Indeed the first non-Italian Pope since the 16th Century was Polish born Karol Jozef Wojtyla who went on to be Pope John Paul. Not sure if this can be attributed to a sporting or religious achievement, but he attracted more people to the Nou Camp than Lionel Messi on an infamous visit in 1982 with 120,000 in attendance.

The Polish have a strong sense of family and unity. They marry young, with the average age being around 27 and receive an award for being married for 50 years…not sure what happens after that milestone has been hit! They are also an innovative bunch and are responsible for a number of discoveries and/or inventions that have had a huge impact on the world today. Need protection from the rain? Or perhaps something a little bit more dangerous? Kazimierz Żegleń and Józef Hofmann can take some credit for bullet proof vests and windscreen wipers, and on the theme of protection, Marie Curie needs no introduction with her discovery of polonium and radium and her subsequent contribution to cancer treatment! But Polish innovation isn’t limited to protection. Polish born Jack Tramiel (born Idek Trzmiel) was the man behind the highest selling single computer model of all time…the legendary Commodore 64! If you are fed up with updating your Mac, the word is that there is a C64 still powering an auto repair shop in Gdansk.

The Polish love their food and drink. Their food is hearty, comfort food and served in big portions. They love a beer too and sit 5th in world for beer consumption at 98.2 litres a year per capita…Vodka is also said to originate from Poland although this is up for BIG debate. Expect lots of pierogi (dumplings) with various fillings and coated in lashings of butter and/or sour cream. Expect big hearty stews (like Bigos) and thick soups with huge chunks of freshly baked bread. Expect pork cutlets the size of a plate, coated in bread crumbs…and if all this doesn’t take your fancy, Poland is the 8th cheapest place in the world to buy a Big Mac!

We hope we have done Polish food justice with our cooking today.
Smacznego! 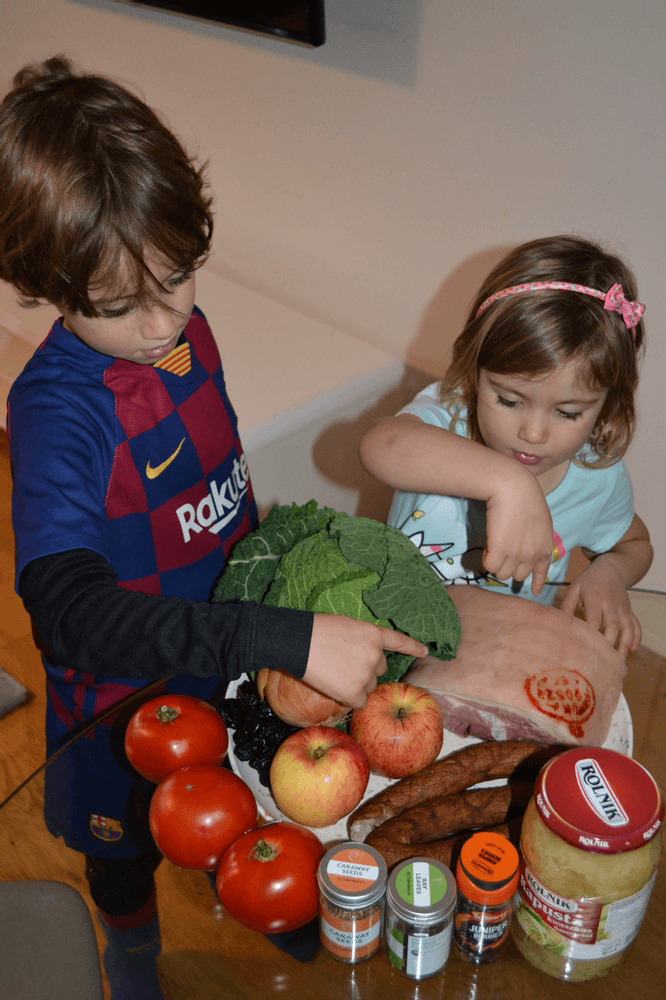 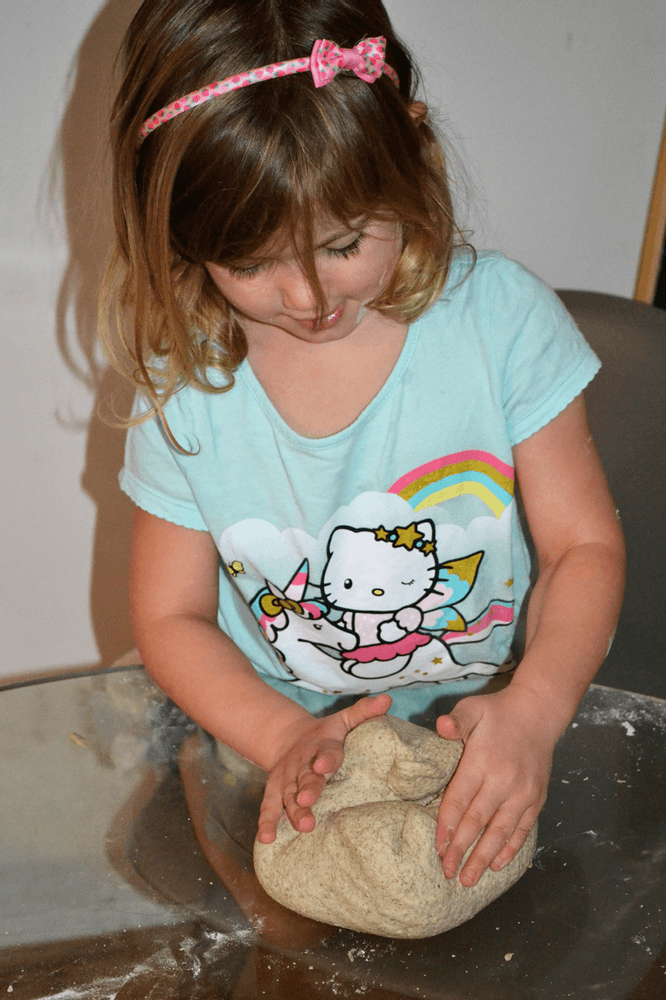 Food prep for the Bigos 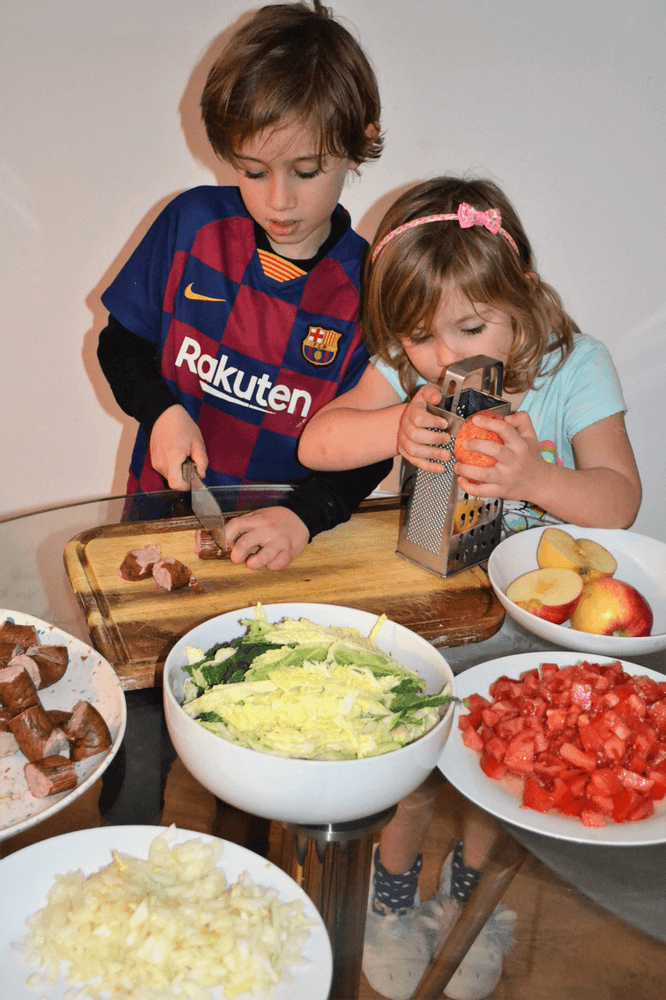 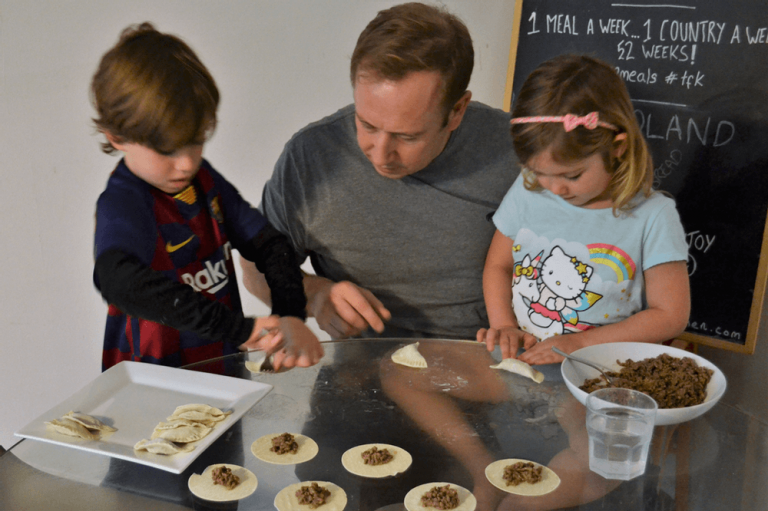 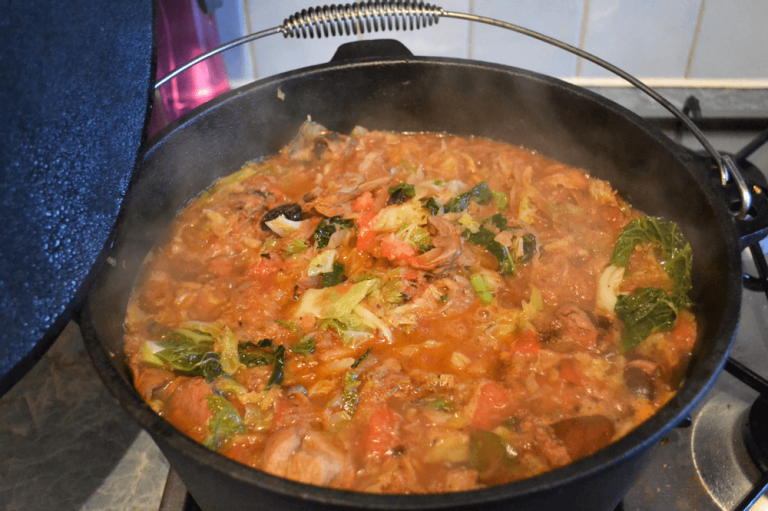 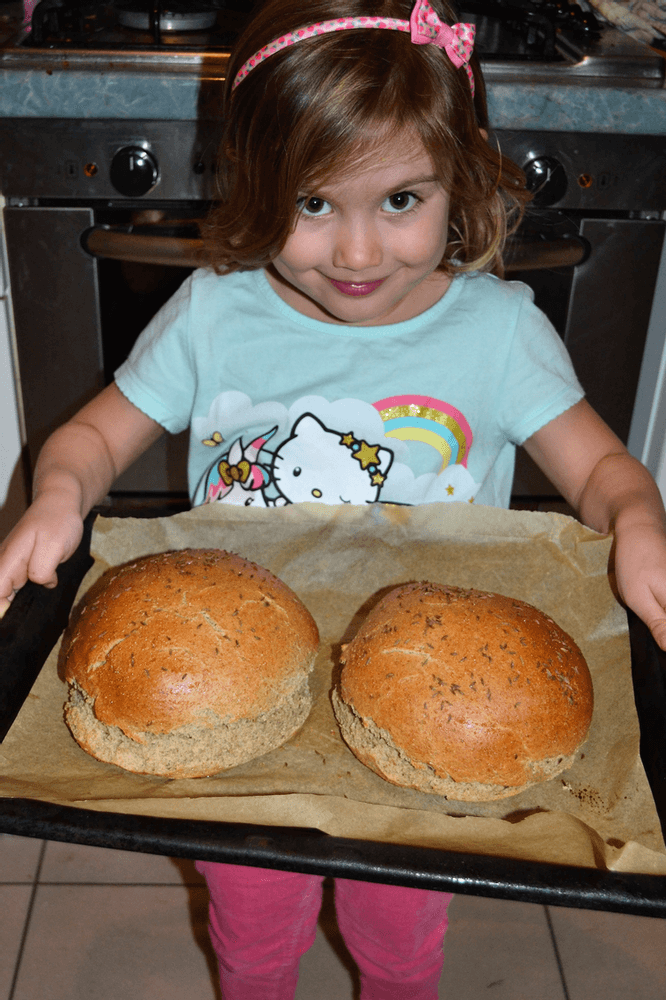 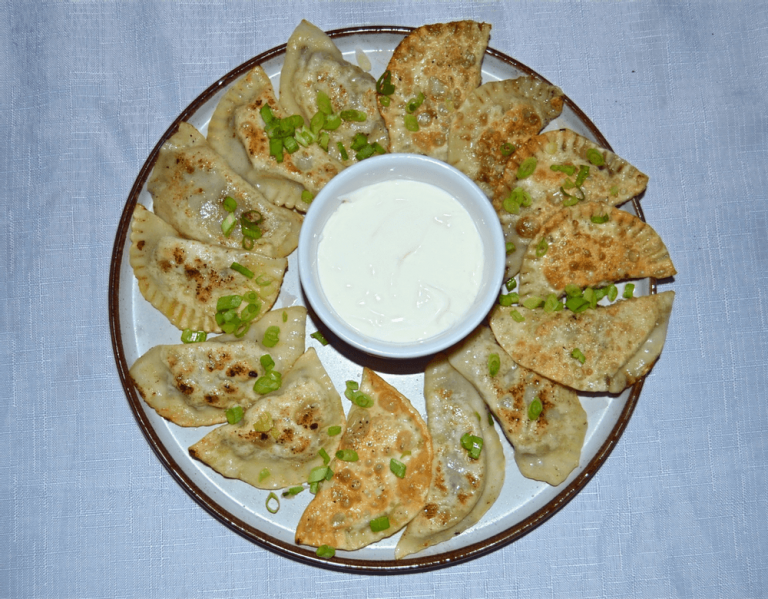 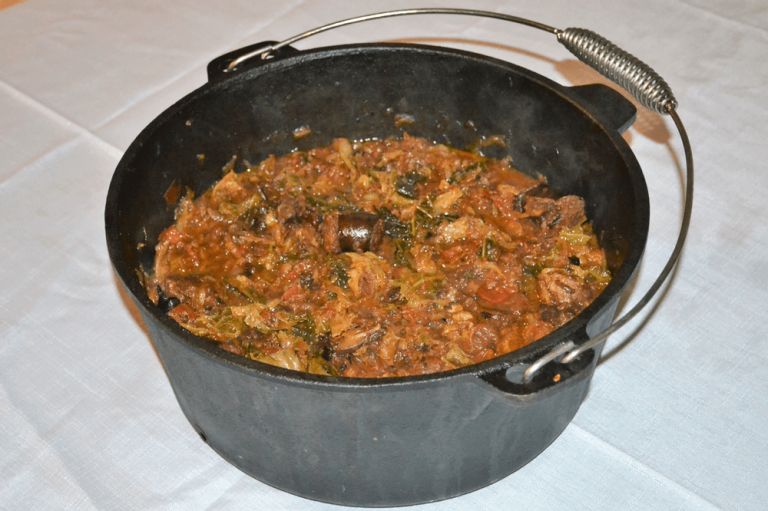 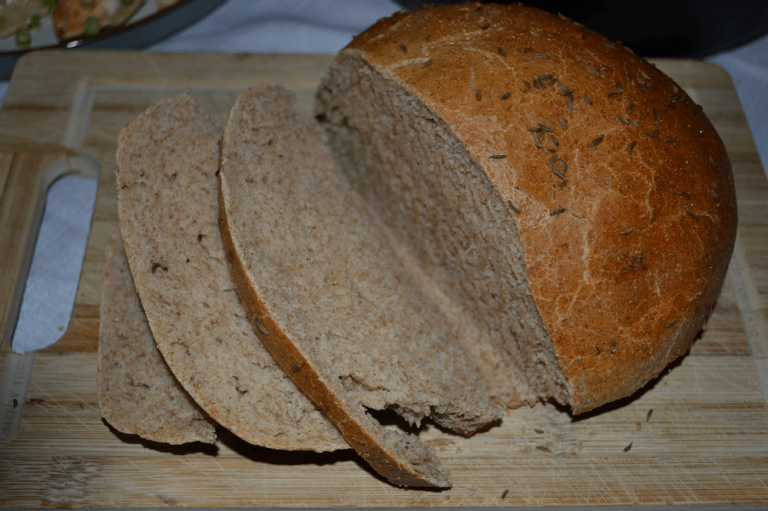 We followed the following recipe for our Chleb Na Zakwas Żytni. 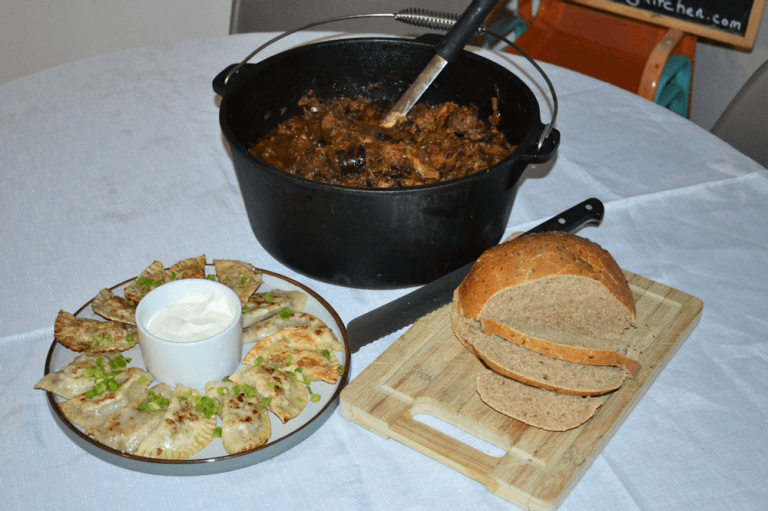 Thank you Poland, that will keep the cold out! 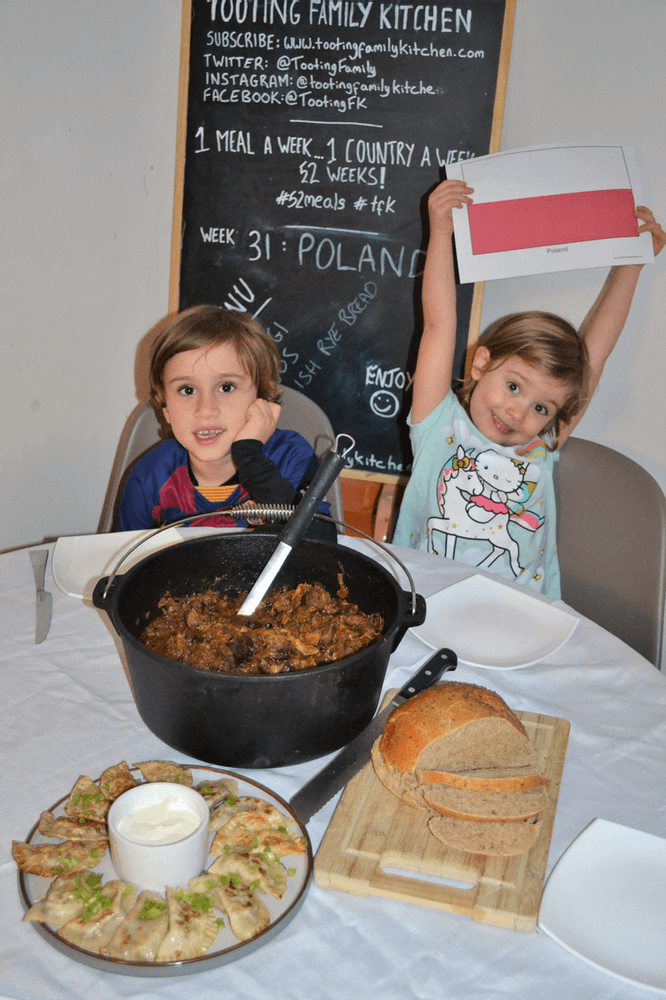 Thank you Poland, that was epic! Can’t wait to explore more of your cuisine.

See you next week!
Tooting FamilyKitchen