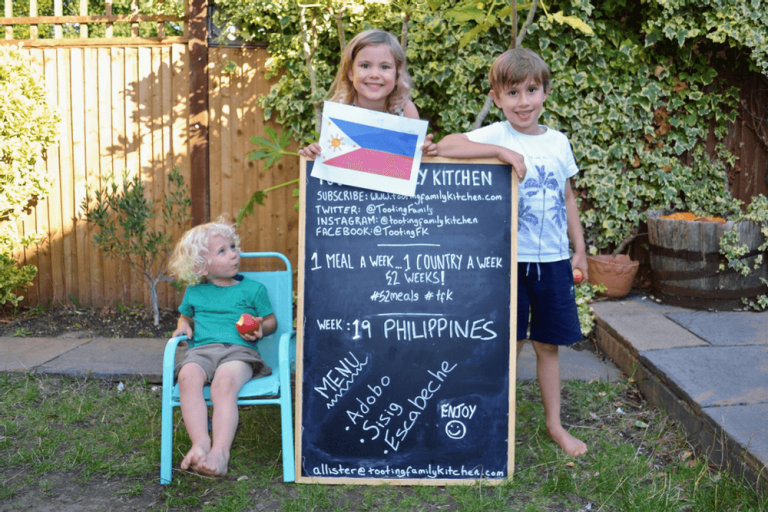 Thank you for joining Tooting Family Kitchen for Week 19 of our 52 Meals Challenge. If you are hitting our blog for the first time, welcome! We are on a culinary journey, exploring different cuisines from around the world to get kids cooking and learn about different International Cuisines and Cultures – celebrating Diversity through Food.

I am a huge fan of Southeast Asian food and when we started Tooting Family Kitchen this was perhaps the region of the world I was most excited to explore. Historically, I have been most familiar with the cuisines of Thailand and Vietnam, so our first culinary destination of Malaysia was as exciting as it was educational and we have been looking forward to returning to Southeast Asia ever since.

The Philippines is a country I knew little about outside of the fact it consists of a LOT of Islands (approximately 7500), they have a pretty controversial president and of course, it is the birth place and home of the living legend that is Manny Pacquiao (Pacman), arguably one of the greatest boxers of all time. Quite randomly, I also heard a few years back that it held the world record for the most simultaneous breast-feeding women at 4000, in an effort to raise awareness in the country and they made the biggest pair shoes (at 17 feet)…feel free to check if these are up to date.

In England (as is the case in many other countries), you are most likely to come across someone from the Philippines in your time of need and perhaps unknowingly, most of us are more likely to be familiar with Filipino people than the territories of the Philippines itself. This is due to the fact that 11% of the population work abroad and the Philippines supplies more nurses to work overseas than any other country. An incredible 25% of all overseas nurses come from the Philippines making it very likely that you or me, or one of our loved ones will be, or has been, looked after by a Filipino nurse or carer…so to all the Filipino nurses, doctors and carers..thank you!

Whilst the caring and healing aspect of nursing is likely to resonate positively with most, what perhaps is more divisive is boxing, but the Pacman’s influence on the country just can’t be ignored. The only 8 weight world champion in history (so far) creates so much passion in the Philippines that when he fights the whole country stops in unity to support and celebrate. Filipino’s are so filled with adoration for their beloved national son that it is reported by the Philippine National Police that street crime drops to ‘zero’ in the centre of Manila when the Pacman is in the ring and the same for most of the country. Zero crime!! Some definite food for thought here for Sadiq Khan.

The Philippines is one of the world’s fastest growing countries and is the 2nd most populous in South East Asia. It’s capital Manila is reported to be more densely populated than any other city on the planet with approximately 55,000 people per square mile. Throw in the fact that there are between 120 and 175 individual languages spoken in the country and it can be a pretty chaotic place! Filipinos however are a happy bunch and like us Brits are absolutely hilarious with a cracking sense of humour (if I say so myself). It’s pointed out by some that this admirable trait is something that helps them to deal with some of the problems they also experience through poverty and natural disasters, specifically regular typhoons and even volcanic eruptions. If by chance you wanted to call your children Bing, Bong, Bogie, Bumbum or Ballsy, without standing out, the Philippines is also the place to go. If only I knew this 6 years ago!

Unsurprisingly when looking at the huge amount of ethno-linguistic groups living across the Philippines, as well as its rich cultural history, the cuisine is hugely diverse. One thing that did strike me (at least when researching the dishes that I did), was the lack of spice in the form of chillies, that I associate with so many other countries in the region. Of course it exists and I have read about the Bicol region where it is quite prevalent, but when looking at some of the most popular dishes it seems to me to be a characteristic particular to Filipino Cuisine. In no way is this a negative thing and choosing our menu for today was a serious challenge! Lechón (a whole roast suckling pig), is something I have enjoyed many a time, especially in Spain at Christmas. Lonnanisa (a Philippine sausage) sounded amazing and Dinuguan (a pork blood stew) is sure to be something I will cook in the near future, but in the end we went for what many consider to be their national dish, Chicken Adobo, along with a Filipino Sweet & Sour Fish and Pork Sisig.

We hope you enjoy our Filipino Feast and hope we have done Filipino cuisine justice. 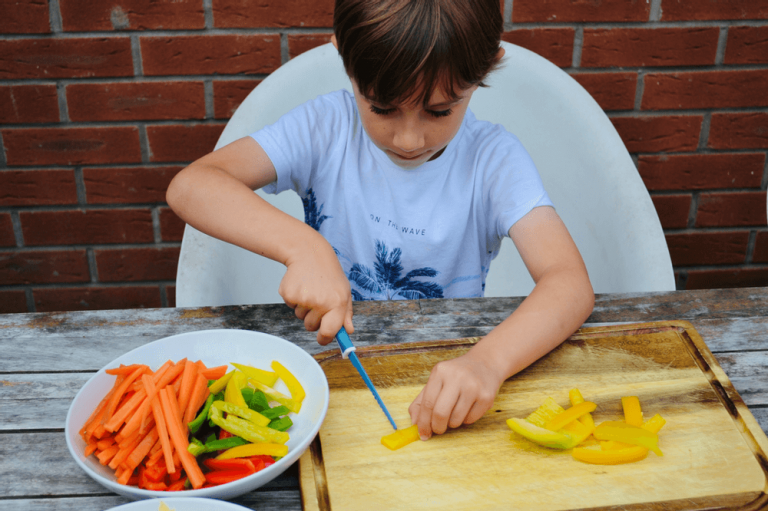 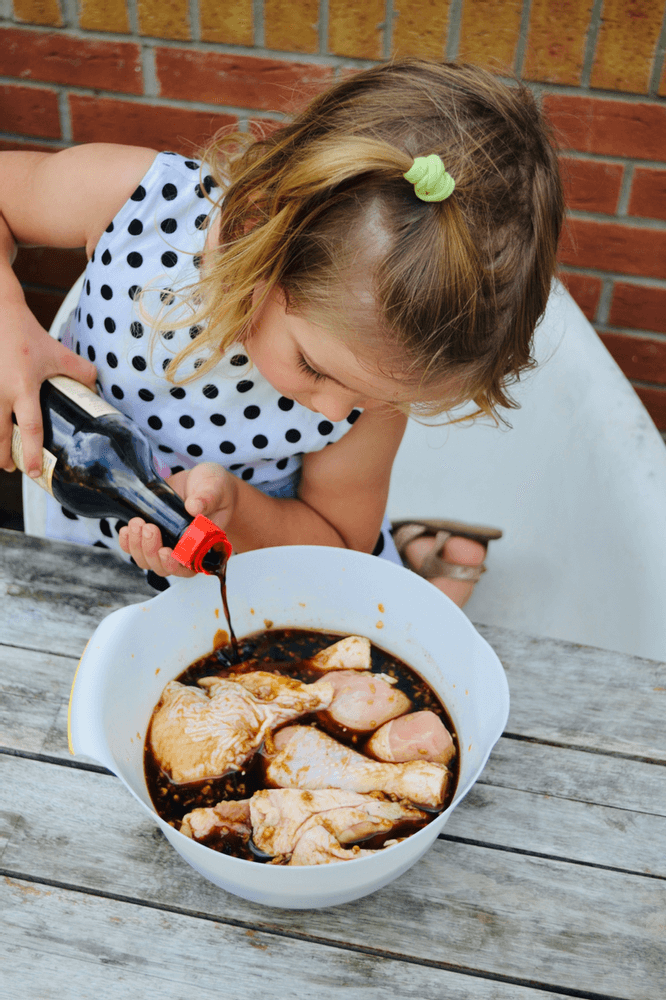 Checking out the Tilapia 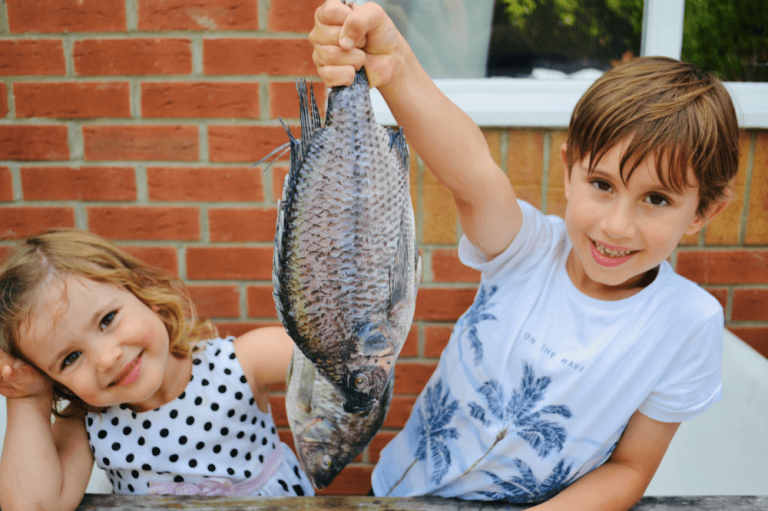 The Chicken Adobo is looking good! 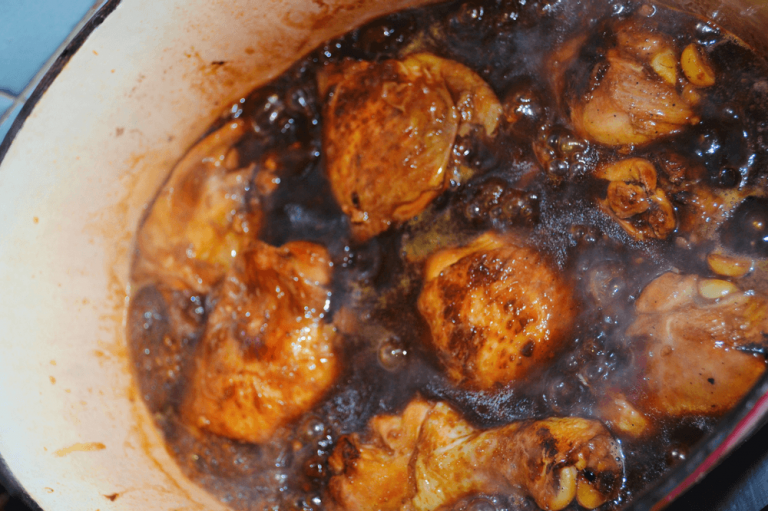 Need a bigger frying pan for these Tilapia 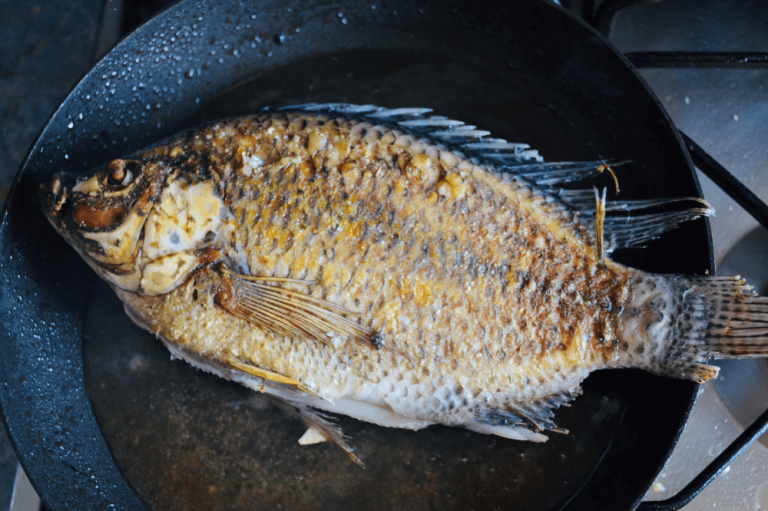 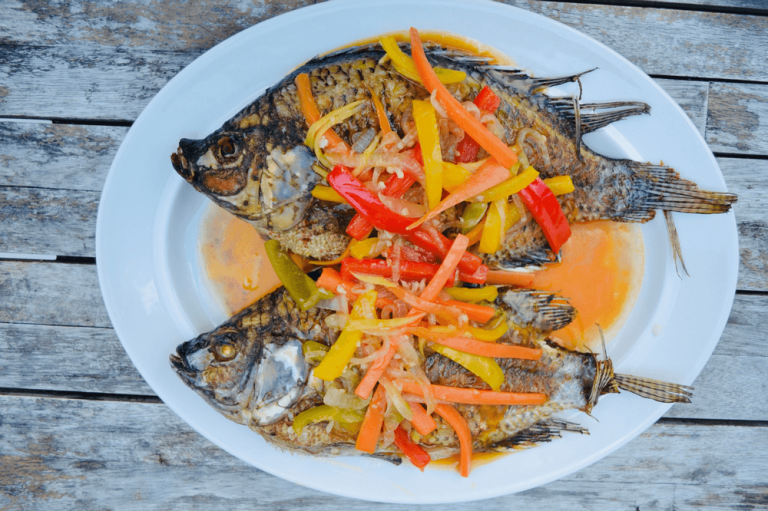 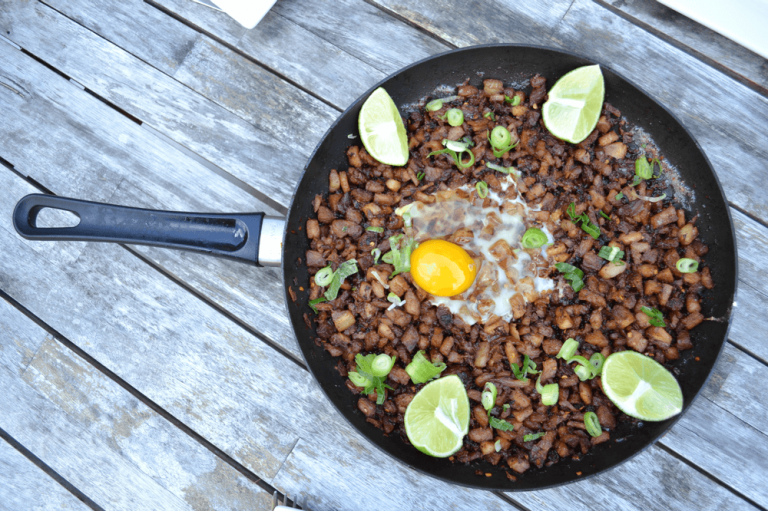 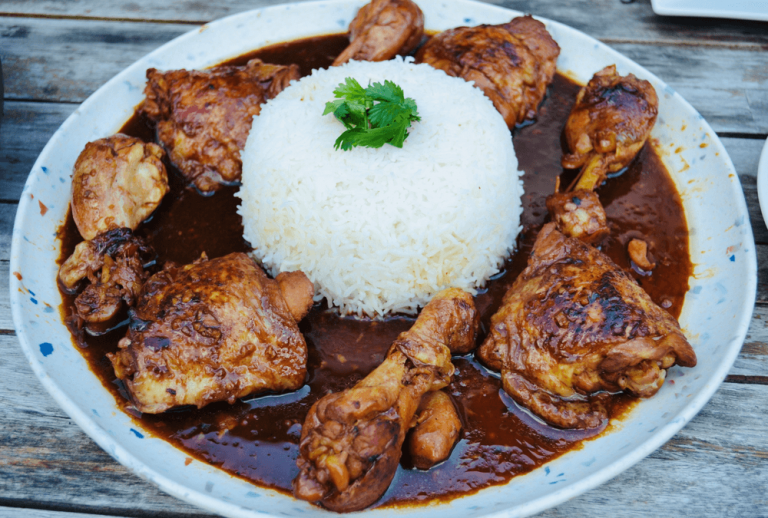 Our Filipino Feast is served! 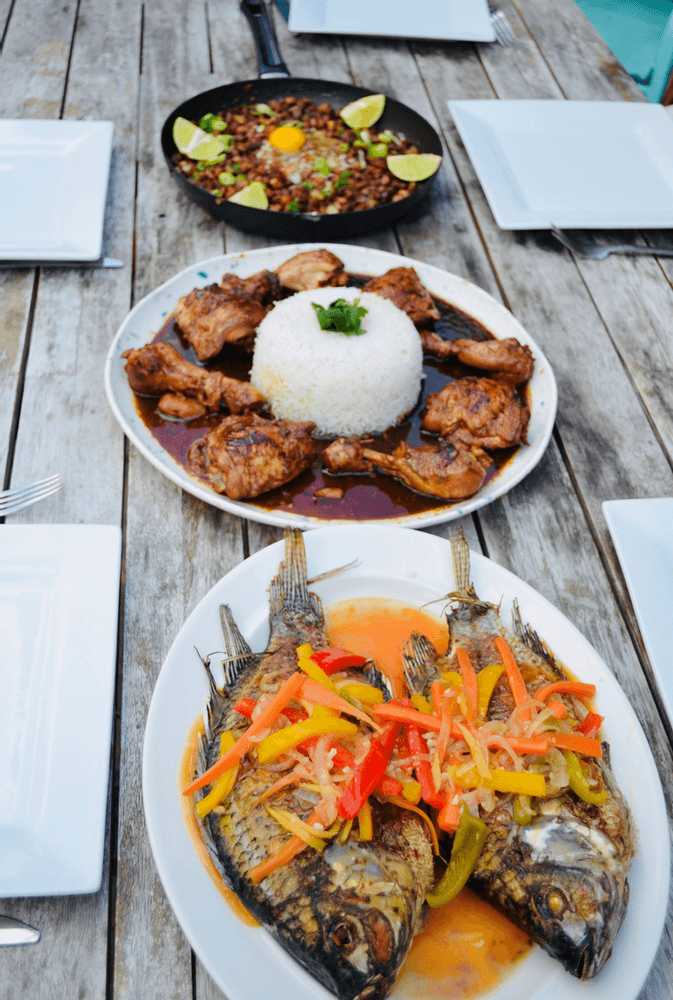 Before things get messy 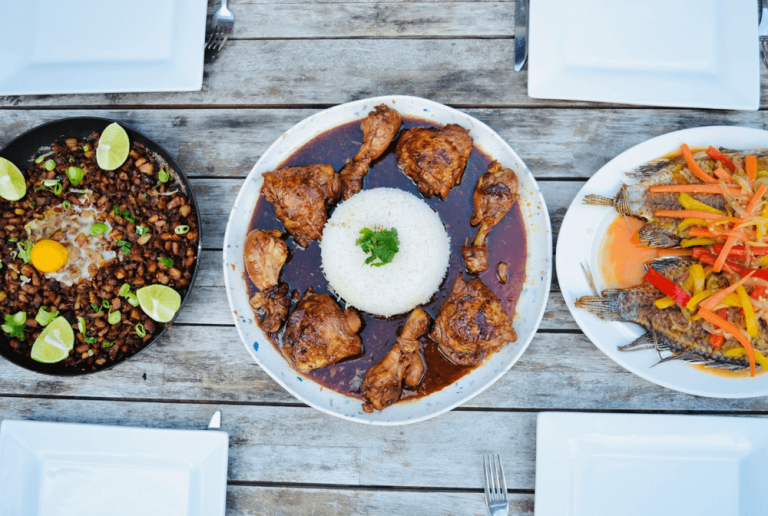 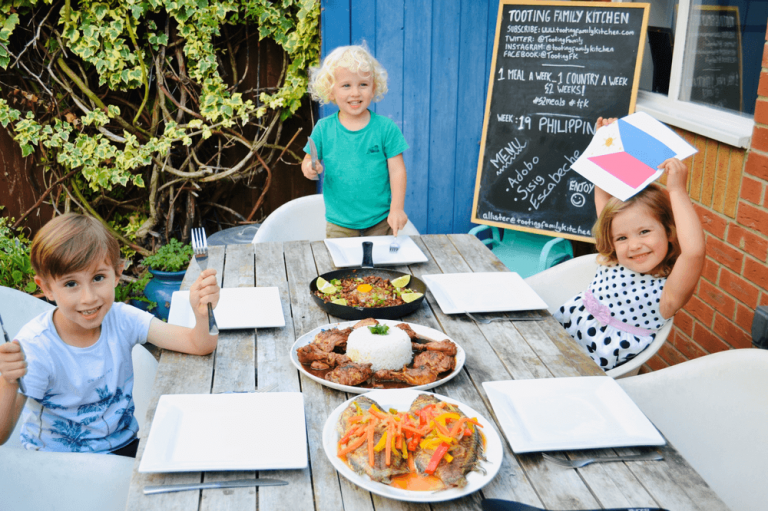 The Adobo going down well with this one... 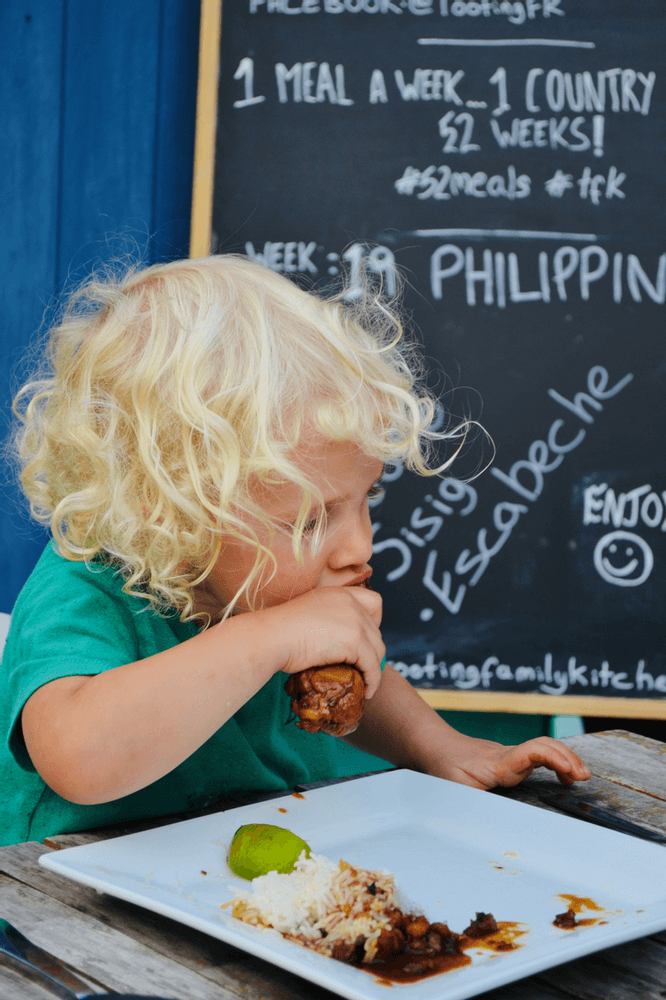 And with this one... 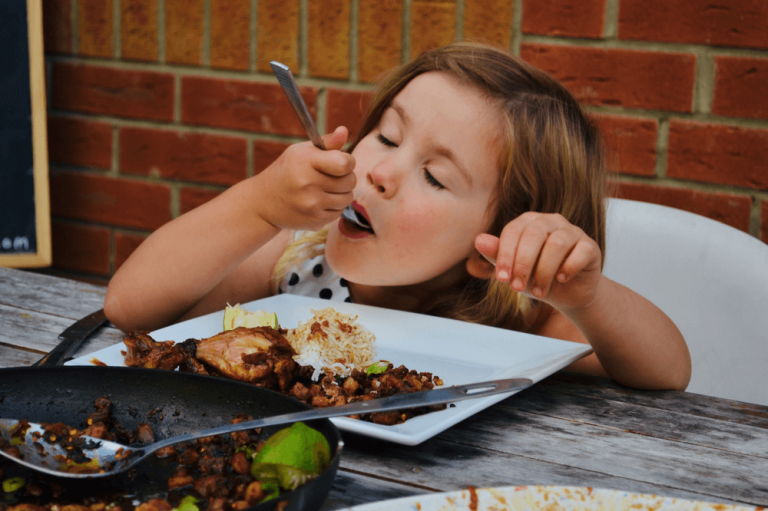 Thank you Philippines - that was brilliant! 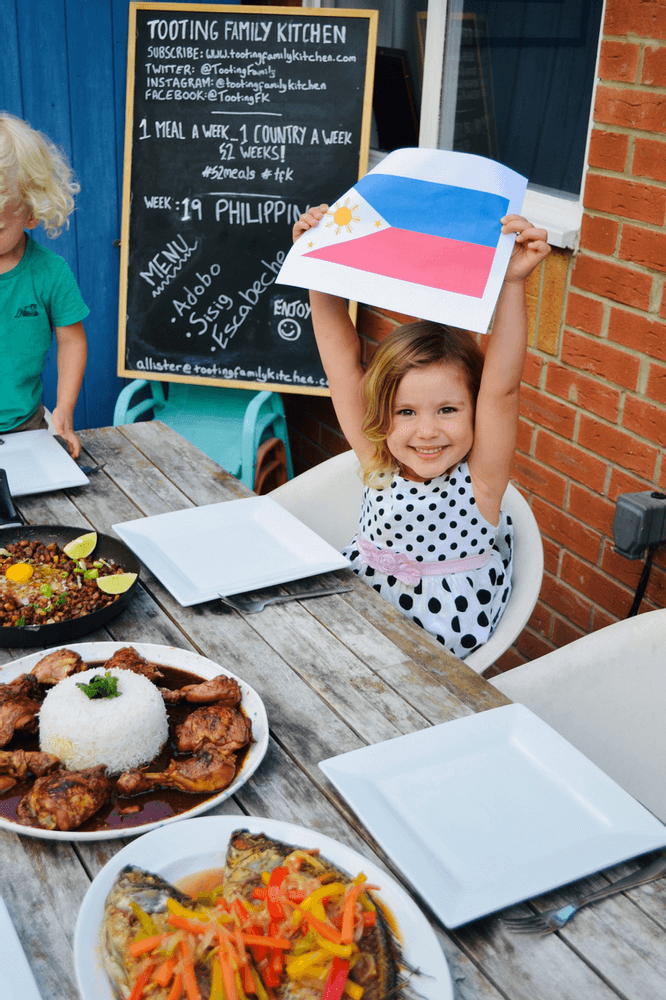 Thank you Philippines, that was epic! Can’t wait to explore more of your cuisine and wont be long before we are cooking up Dinuguan.