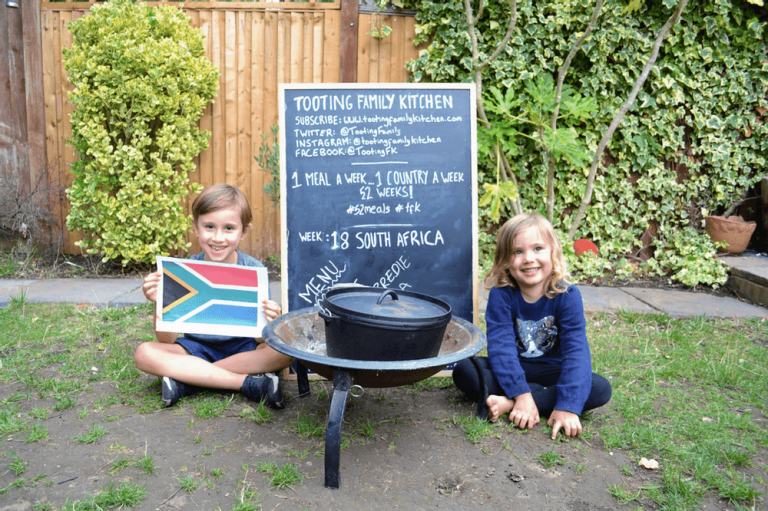 Thank you for joining Tooting Family Kitchen for Week 18 of our 52 Meals Challenge. If you are hitting our blog for the first time, welcome! We are on a culinary journey, exploring different cuisines from around the world to get kids cooking and learn about different International Cuisines and Cultures – celebrating Diversity through Food.

I feel I have spent a life time planning a trip to South Africa but year after year it has managed to evade me for one reason or another… it won’t do forever though! It is a huge and extremely diverse country that seems to have everything you could possibly wish for in a holiday rolled into one…and more. Its rich natural history, geographical positioning and international culture make it a hugely popular destination and it’s no wonder so many couples are tempted to elope, or honeymoon there. It’s that place for a really special holiday…a life changer…when the Costa Del Sol just won’t do! You just know a 2 week action packed trip to South Africa is going be an experience you will never forget and will never regret…next year!

Occupying the southern tip of Africa with a huge 1,770 miles of dramatic coastline taking the full force of the South Atlantic Ocean one side and the Indian Ocean the other side it is a country of varying climatic conditions all of which make a contribution to its beautiful scenery and incredible wildlife. The temperate interior plateau, subtropical northeast, desert of the northwest and relatively pleasant Mediterranean feel of the southwest all offer something completely different…throw in 11 official languages, 3 capital cities and it makes for a very interesting place! Want to stare a great white shark in the face? No problem! Want to do the world highest bungee jump? No problem! Want to ride an ostrich? No problem (for those under 75kg)!

South Africa is part of the 5 emerging national economies with significant regional influence known collectively as the BRICS (Brazil, Russia, India, China and South Africa). It enjoys a relatively stable economy backed by its huge natural resources, tourism, fertile lands and intellectual capital and since the end of apartheid has enjoyed more political equality. Sadly this has not always transcended into peace and harmony and rates of poverty, crime and wealth inequality are ranked amongst the highest in the world. It is a country with a very young population (it is reported that the youth (aged 18 – 34) make a up a 3rd of the population) and there is hope amongst many that this generation will take the lead in guiding this incredible country with so much to offer forwards, to true reconciliation, peace and prosperity for all – in a country where 2 Nobel Peace Prize winners (Nelson Mandela and Archbishop Desmond Tutu) lived on the same street this feels inevitable.

South Africa’s cuisine is as diverse as its population. Throw in the fact it has the world’s largest beer brewery and is one of the top 10 wine producers on the planet and you know you are in for a treat. Food has evolved into a fairly unique mix of external culinary influences such as Dutch, French, Indian and Malaysian and of course the food, cooking styles and recipes from its indigenous peoples.

I was mightily tempted to cook so many South African inspired dishes for this weeks post. I wrestled with replicating an authentic braai, including some of their famous boerewors. I love a curry and at some point will definitely cook a Cape Malay Curry and Bunny Chow looks as good as it does delicious! In the end though we were delighted to settle on Bobotie (which is often considered the national dish), Tomato Bredie (slowly stewed in a cast iron pot over hot coals) and CHAKALAKA…just because it’s a really cool name and so difficult to say without shouting (or putting in capitals). 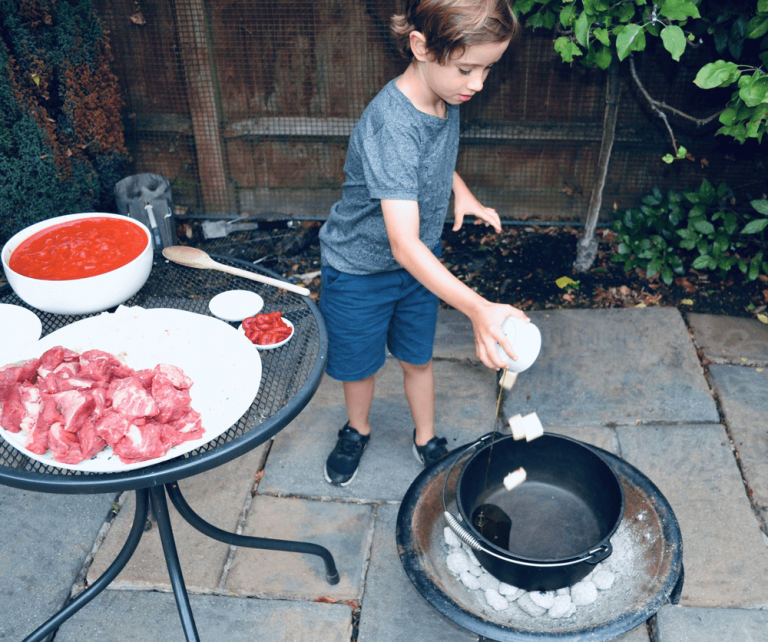 Always start with the onions 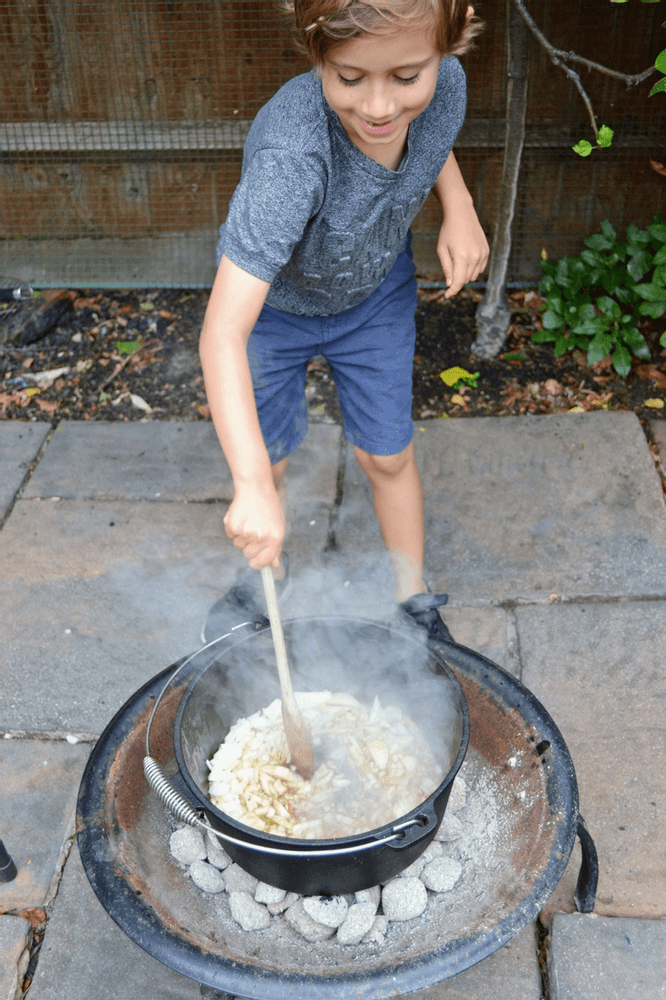 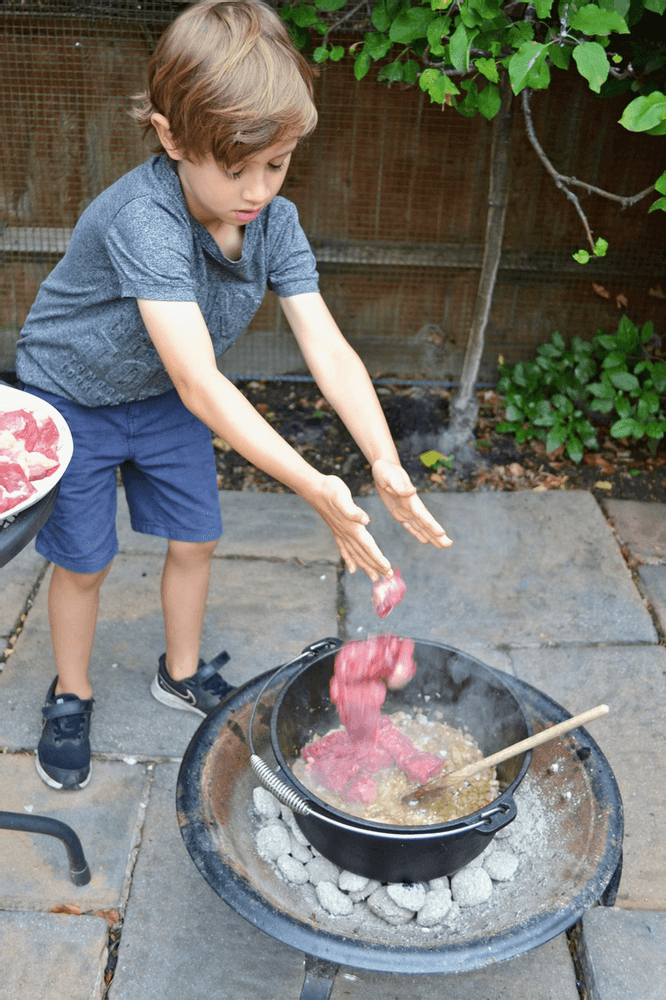 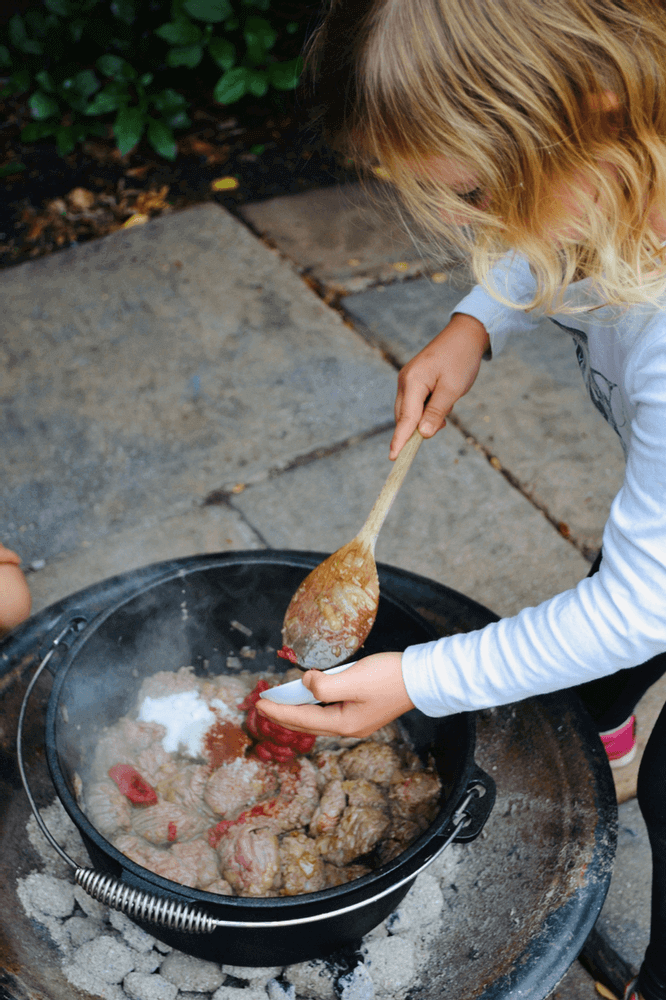 This could get messy!!! 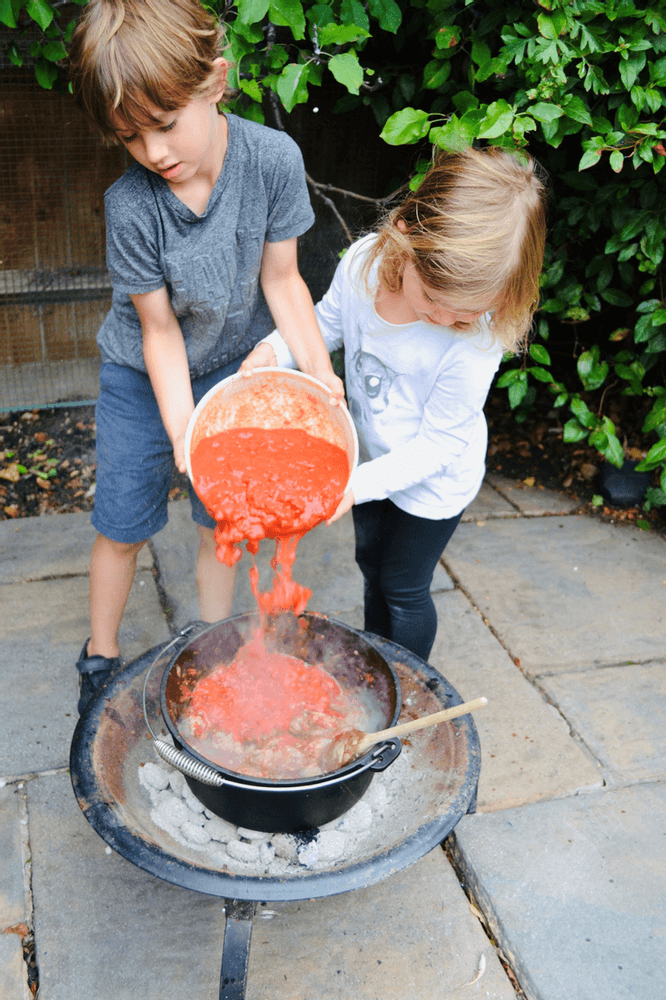 Checking out the herbs 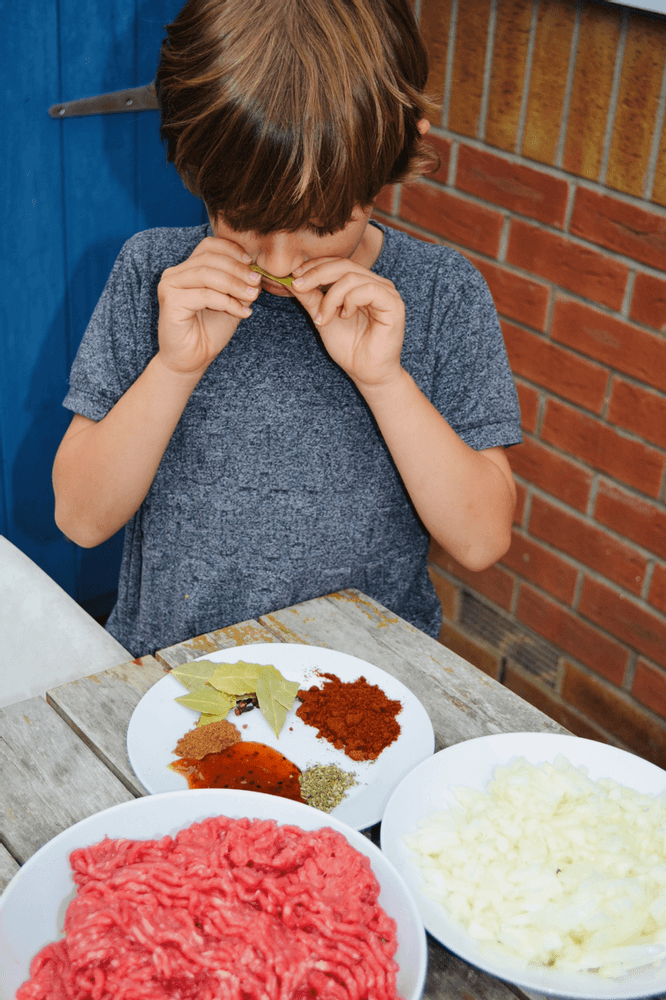 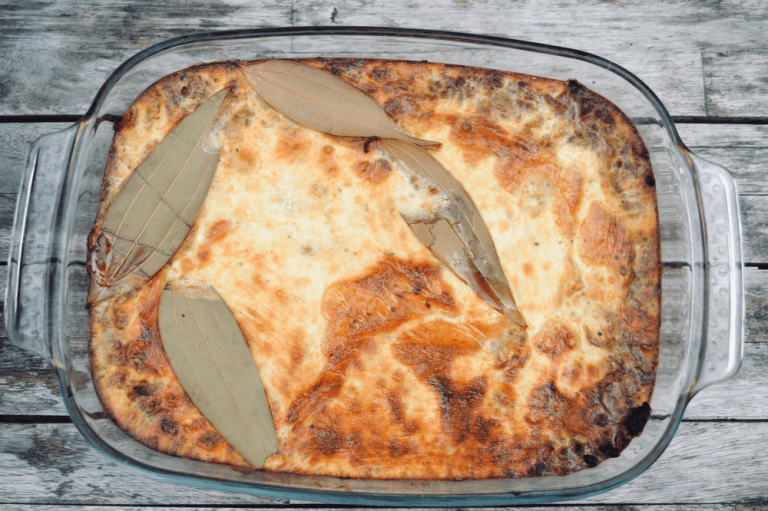 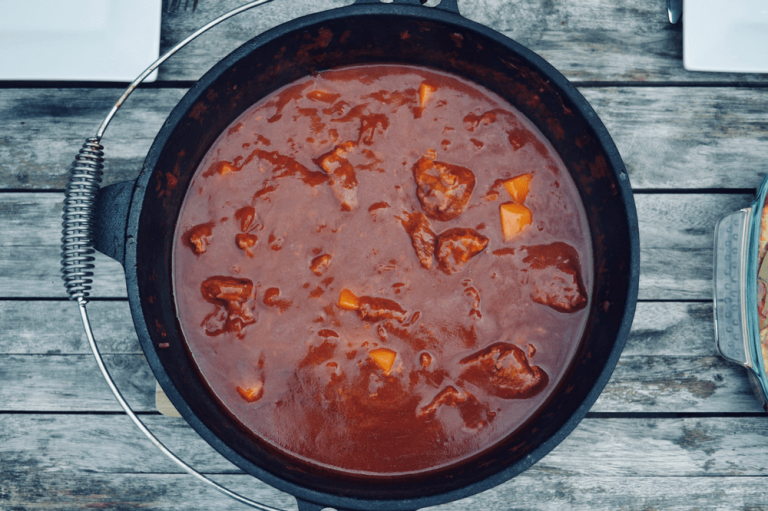 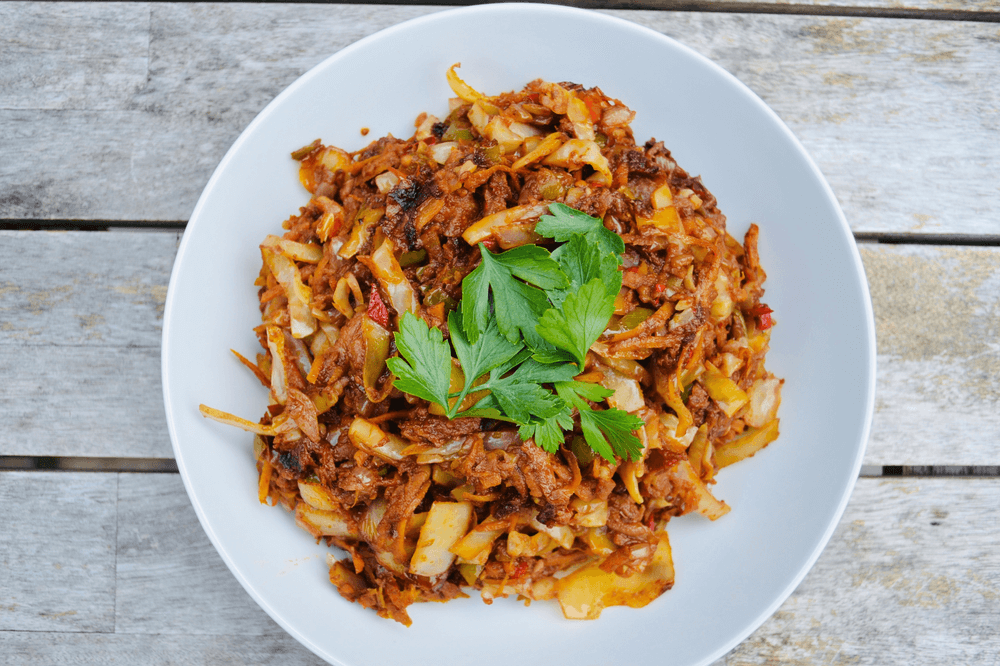 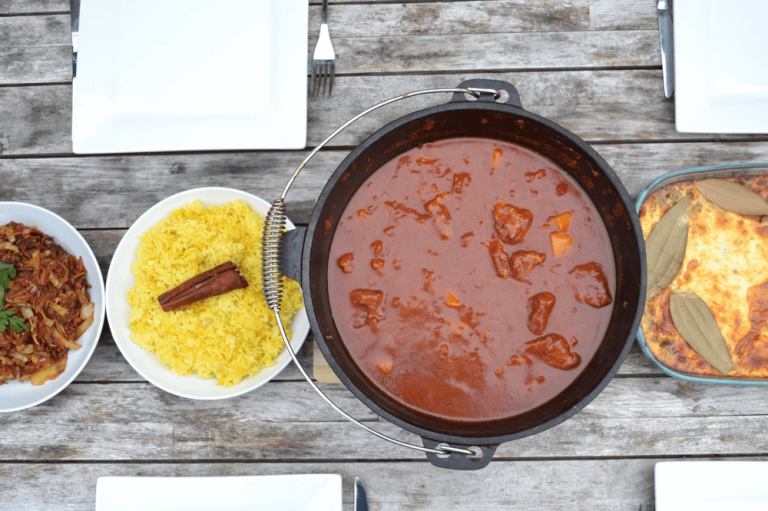 Looking forward to tucking in! 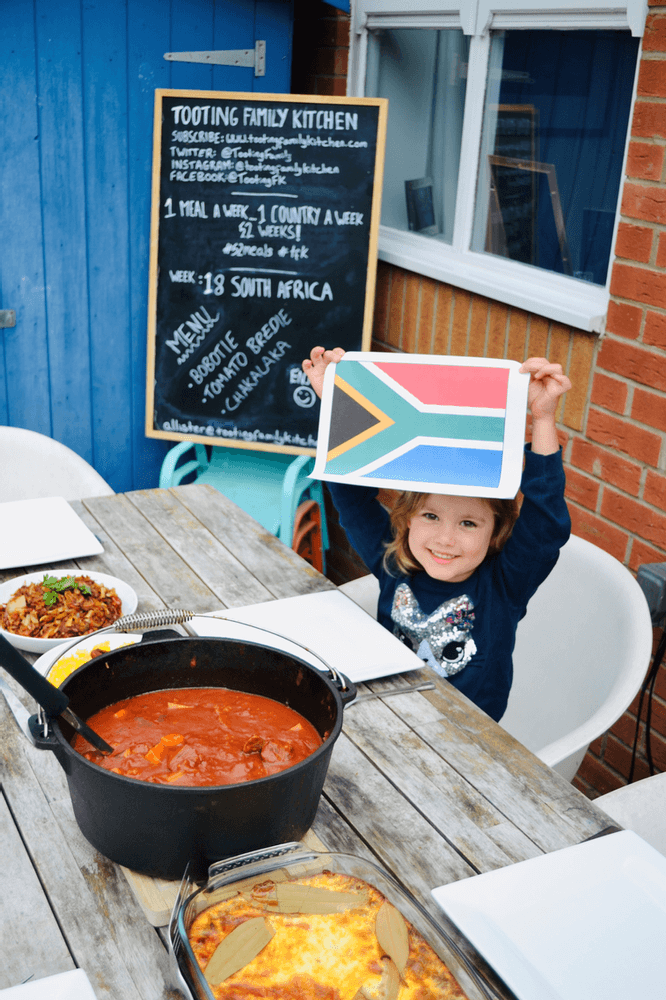 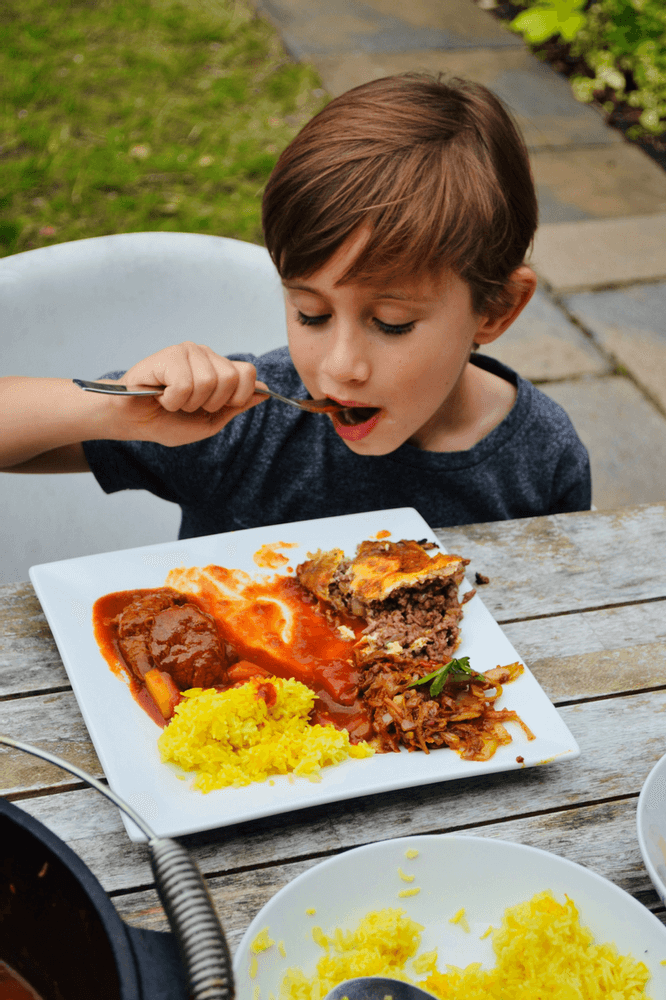 So is the Bobotie... 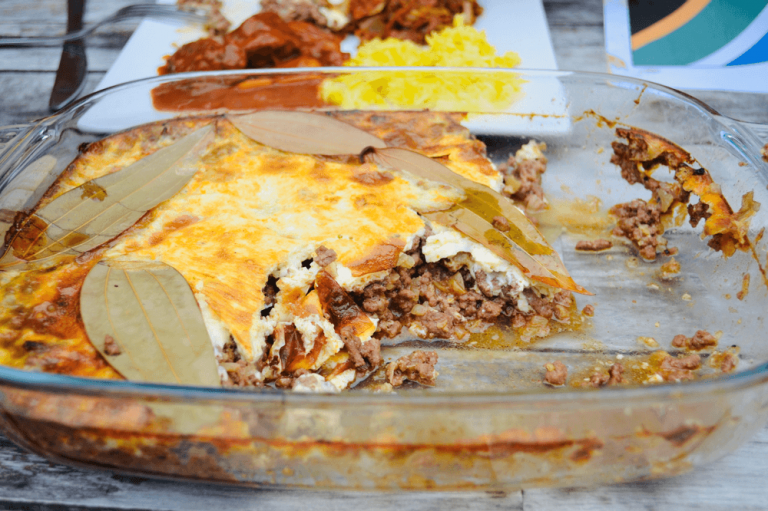 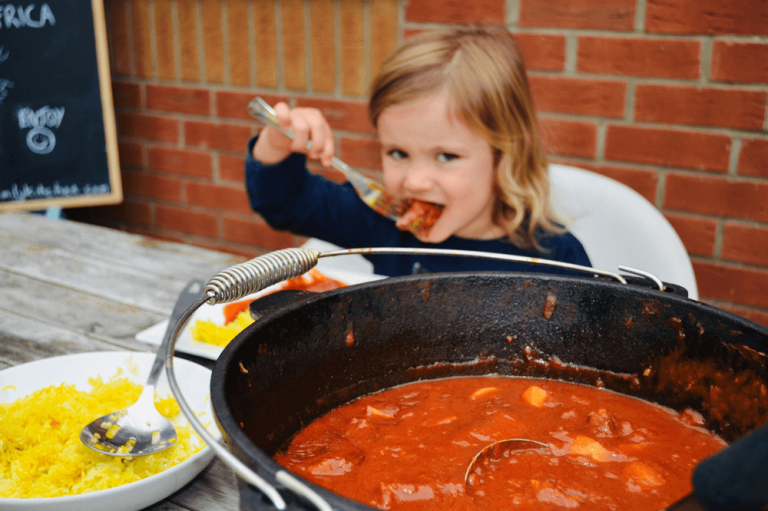 Thumbs up for South Africa 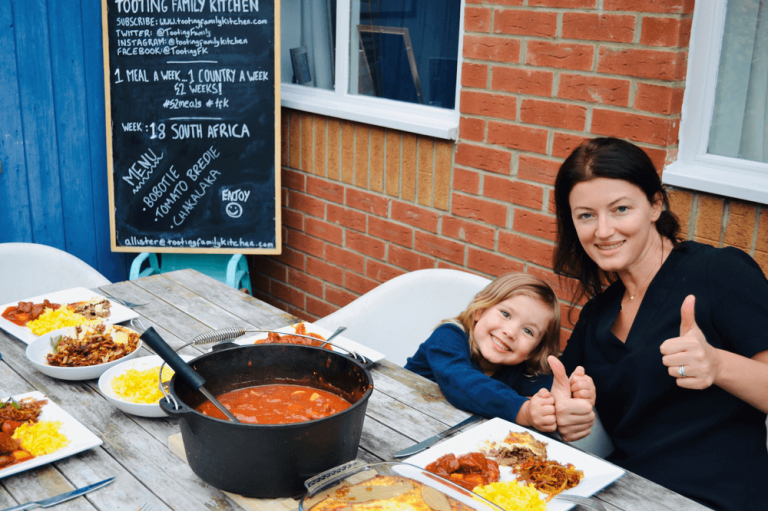 South Africa - that was delicious! 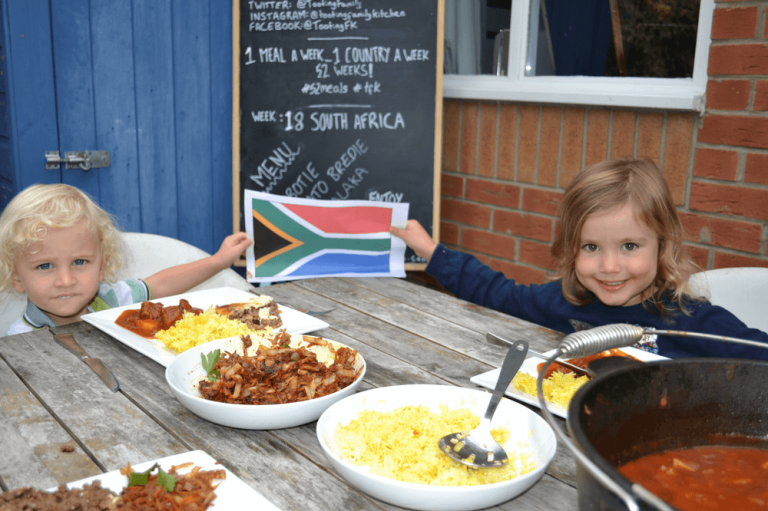 Thank you South Africa, that was epic! Our 3rd African installment was all we hoped it would be and we can’t wait to visit your incredible country and experience it for ourselves.