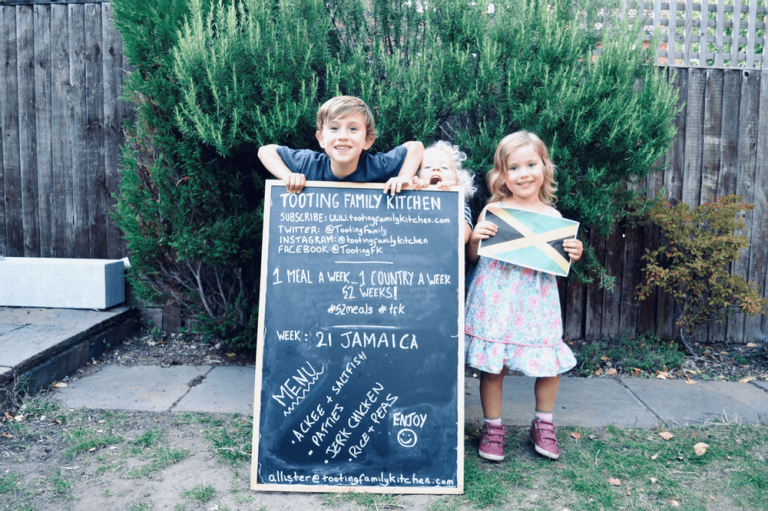 Thank you for joining Tooting Family Kitchen for Week 21 of our 52 Meals Challenge. If you are hitting our blog for the first time, welcome! We are on a culinary journey, exploring different cuisines from around the world to get kids cooking and learn about different International Cuisines and Cultures – celebrating Diversity through Food.

I have been really excited to return to the Caribbean since our Barbados themed feast in Week 9. When people think of Jamaica they think of a place that has mastered the art of chilling out! A beautiful tropical paradise with the ultimate laid back vibe and all year round tropical climate! Funny how my first memorable thoughts of Jamaica are from the infamous 1993 film ‘Cool Runnings’ based on Jamaica’s entry into the 1988 Winter Olympics by fielding a bobsled team…”Feel the Rhythm, feel the rhyme, get on up, it’s bobsled time!” Unsurprisingly they came in last (on their borrowed bobsleigh) but what a cool thing to do and although in the film they are depicted as being outcasts amongst the more experiences Winter Olympians, I have read that in actual fact they were extremely warmly received and were regularly mobbed by applauding fans…amazing!

Cool is probably the best adjective to describe most things Jamaican…Usain Bolt – Cool! Bob Marley – Cool! Reggae Music – Cool! Beaches and rum punches – Cool! And if we can’t agree on all of these there will be no disputing Shaggy – Super Cool! One look at their iconic national flag and you immediately think ‘Cool’ and you know what, it is! The present design of their flag emerged from a national competition when members of the public were encouraged to send in their ideas. The green represents the lush landscape, the yellow for the golden sunshine and the black represents the strength and creativity of the Jamaican people…very very cool! So what is the secret to the laid back vibe? Could it be that Jamaica has more churches per square mile then any other location? If religion is not your thing perhaps it’s the fact that it has more rum bars per square mile than anywhere else in the world? And if drinking is not your thing could it be that Jamaica produces more music per capita than anywhere else in the world and of course are the undisputed Kings of Reggae? Whatever it is, they have perfected being cool!

This culture and way of life seems to be the perfect backdrop of creativity and of course the legend that is Bob Marley needs no introduction, nor does Reggae music which originated in Jamaica. What is worth highlighting, is that many other genre’s of music have been influenced and have evolved from music created in Jamaica. It was a Jamaican DJ, ‘DJ Kool Herc’ who was credited for officially originating hip hop music through his “Back to School Jam” in 1973. It doesn’t end with music though and our very own ’James Bond’ novels (all 13 of them) were created and written in Jamaica by Ian Fleming, who was completely in love with the country that he called his home and in fact two of the Bond films (Dr. No and Live and Let Die) were made there too.

Talking about religion, rum bars and music takes me back to our Big Greek wedding and perhaps unsurprisingly it was our friend Theresa (who was born and grew up in Jamaica) that was first to hit the dance floor and take it a step further by grabbing the mic when the band were winding down to inject some energy back into the party by belting out a tune with the pitch, tone and confidence of a professional. It was cool, very cool!

We asked Theresa about her upbringing in Jamaica and what is was like from a culinary perspective and got some top tips for our cooking today. She told us that Sunday evening was the best meal of the week and like many Jamaican families they would start the preparation on a Saturday evening by soaking the peas and marinating meat. A typical Sunday dinner for most Jamaican’s would be rice and peas and chicken and that although they say peas they actually use kidney beans. Jerk chicken, which is perhaps the first thing we associate with Jamaica here in the UK, is something that is usually done at family parties or bbqs and saltfish & ackee (which is regarded by many as the Jamaican national dish) was sometimes prepared for breakfast and served with fried dumplings.

For our Jamaican style family feast we have attempted saltfish & ackee, jerk chicken, rice and peas, Jamaican style patties and fried plantain and we hope we have done Jamaican food justice!

Checking out the ingredients for our jerk chicken. 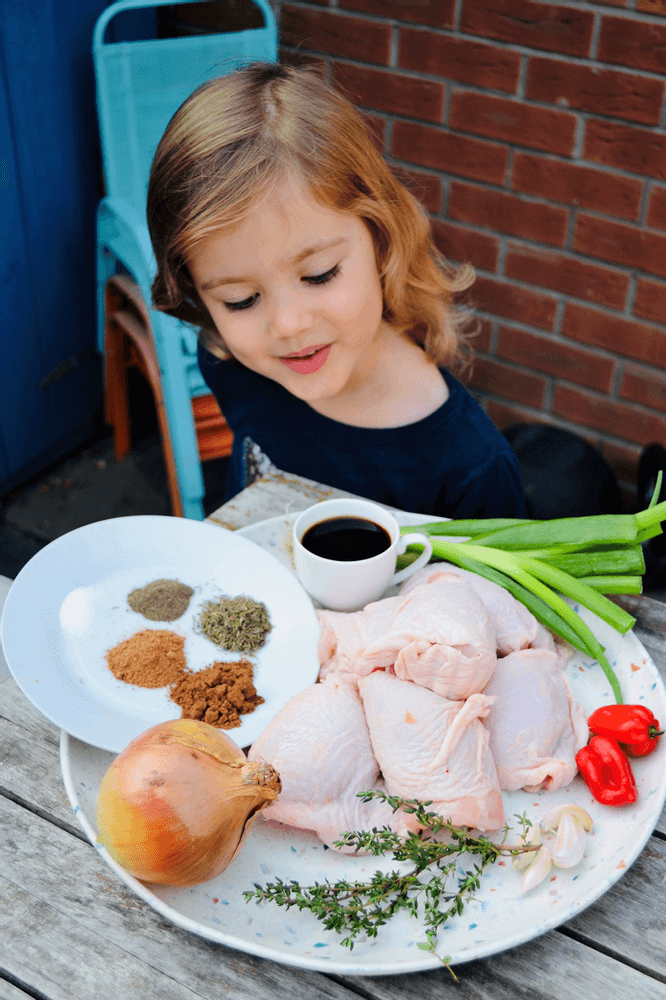 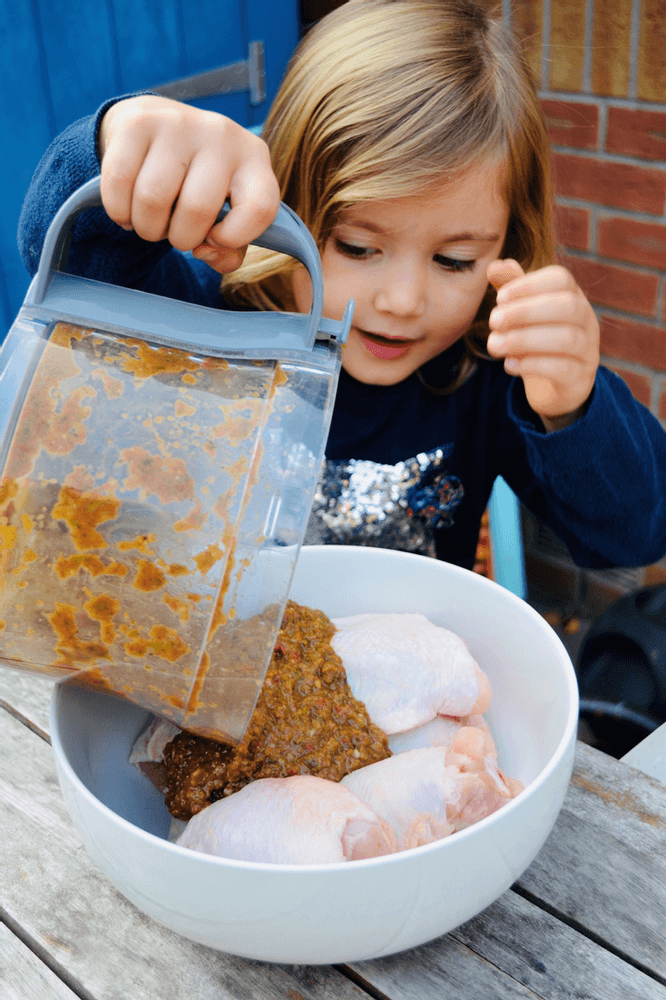 Adding the ackee to the saltfish 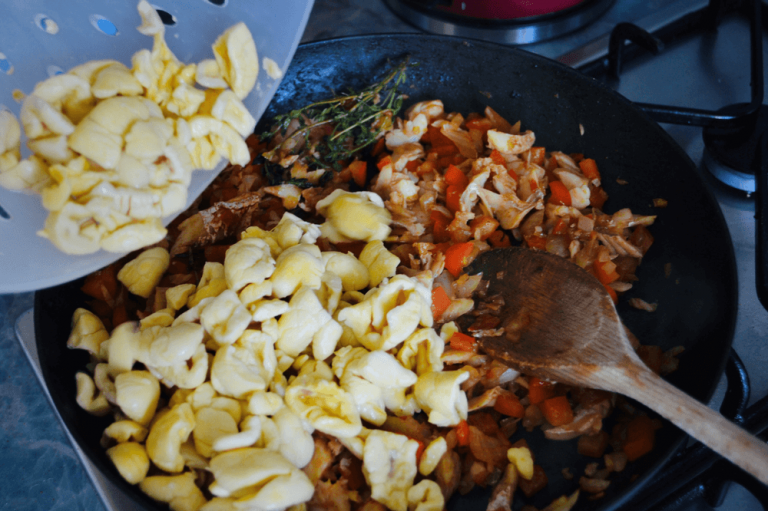 Jerk chicken - fresh from the oven! 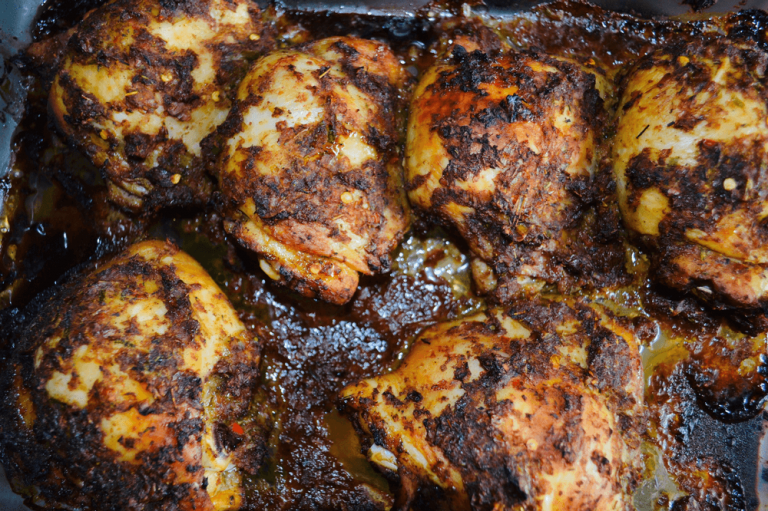 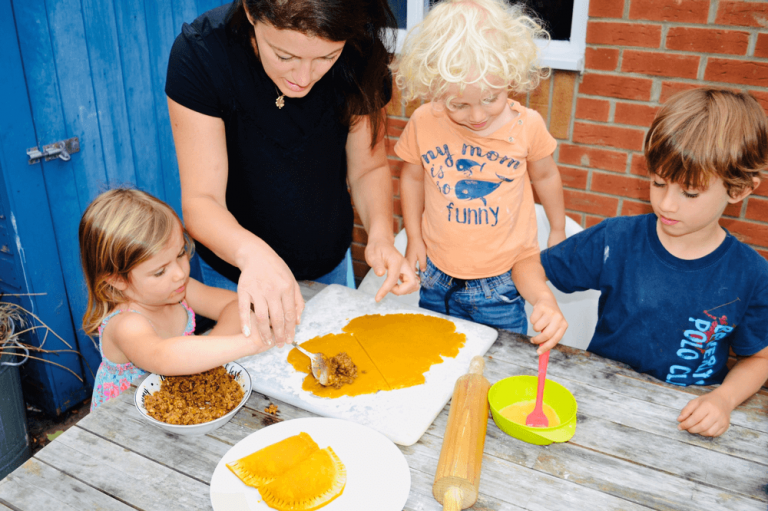 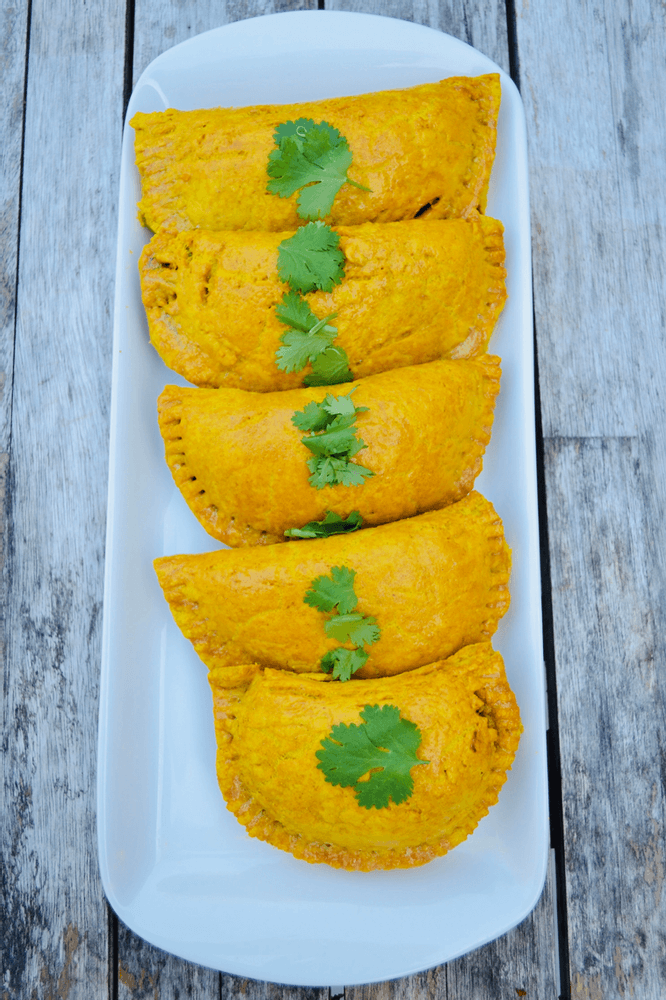 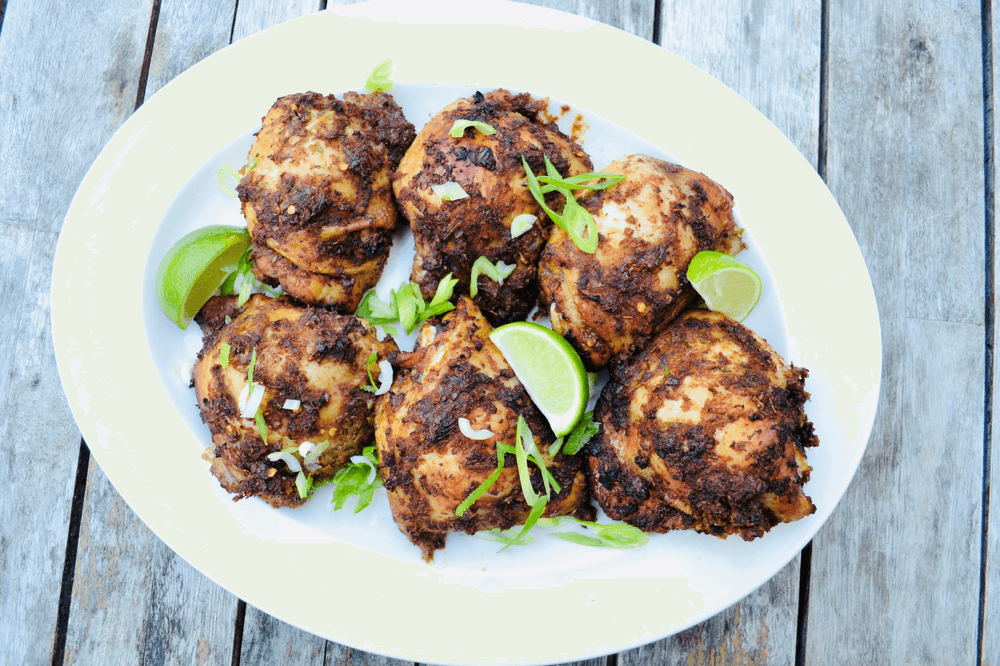 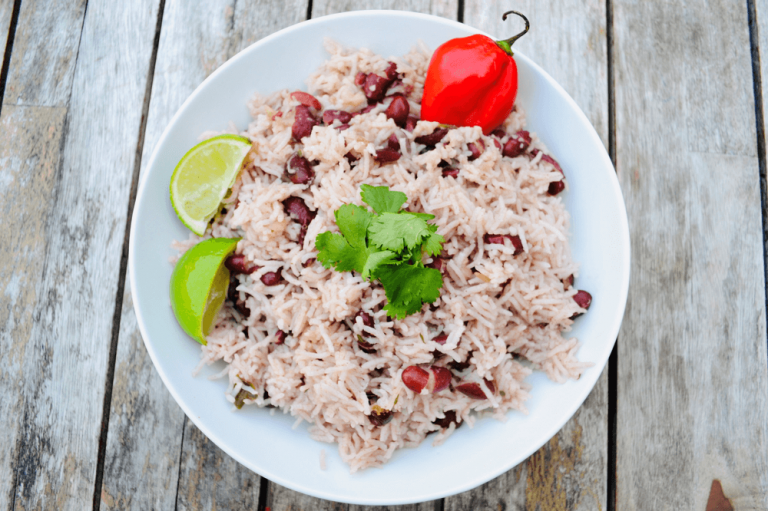 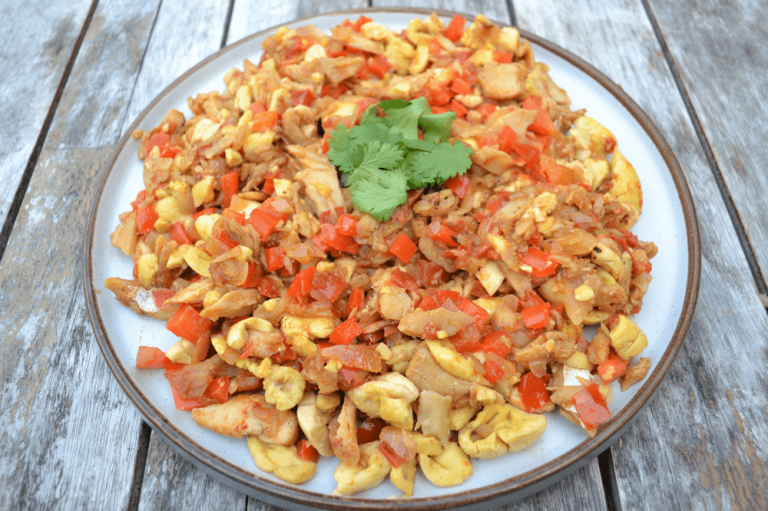 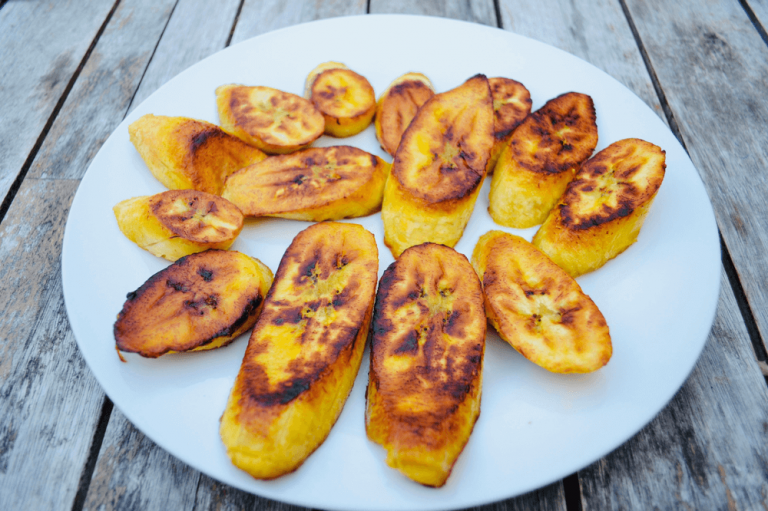 Head over to our Venezuelan feast for simple cooking method. 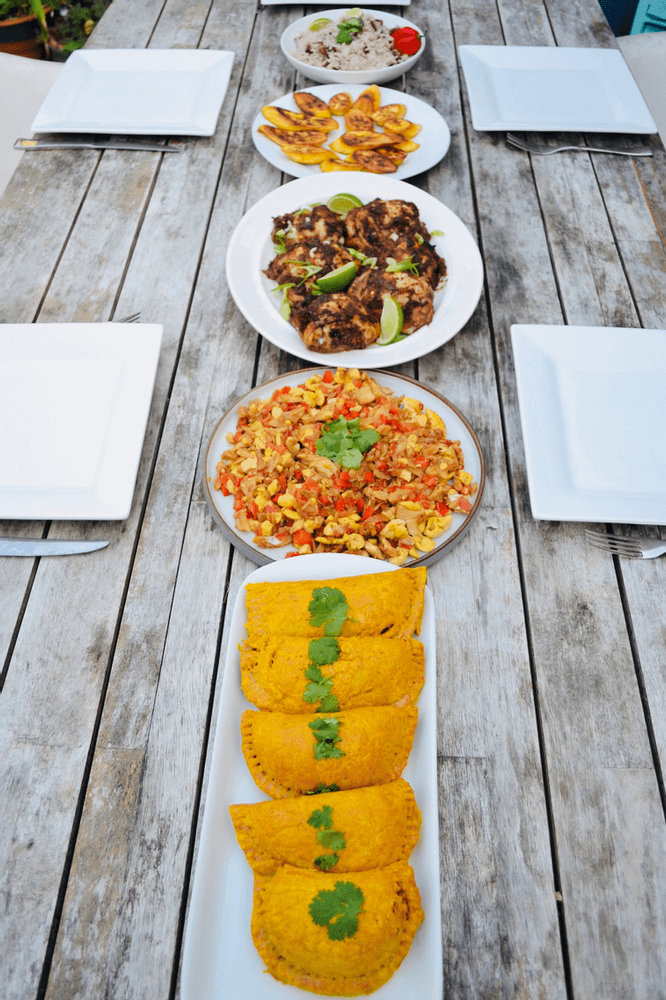 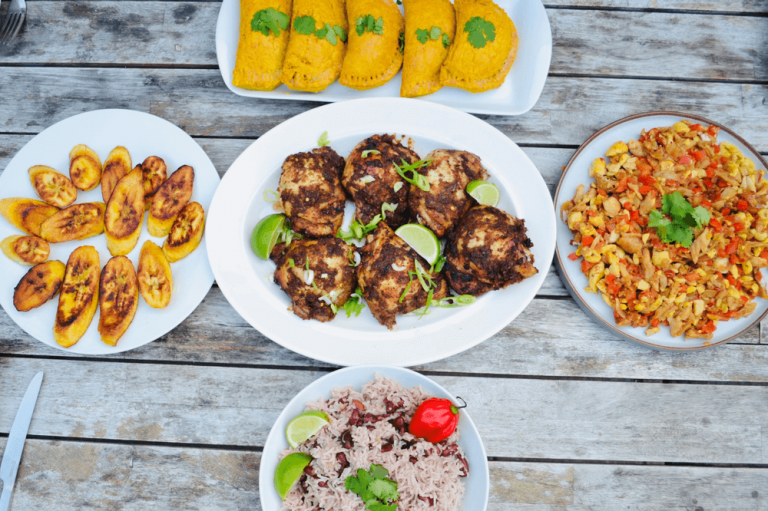 Can't wait to get stuck in! 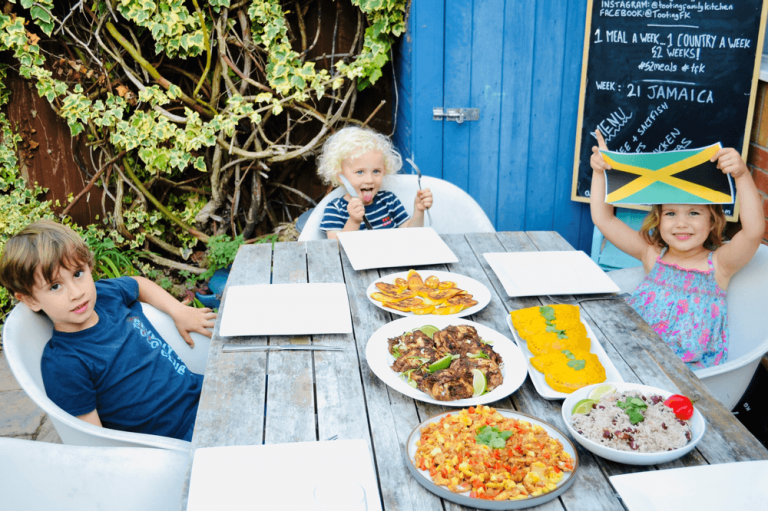 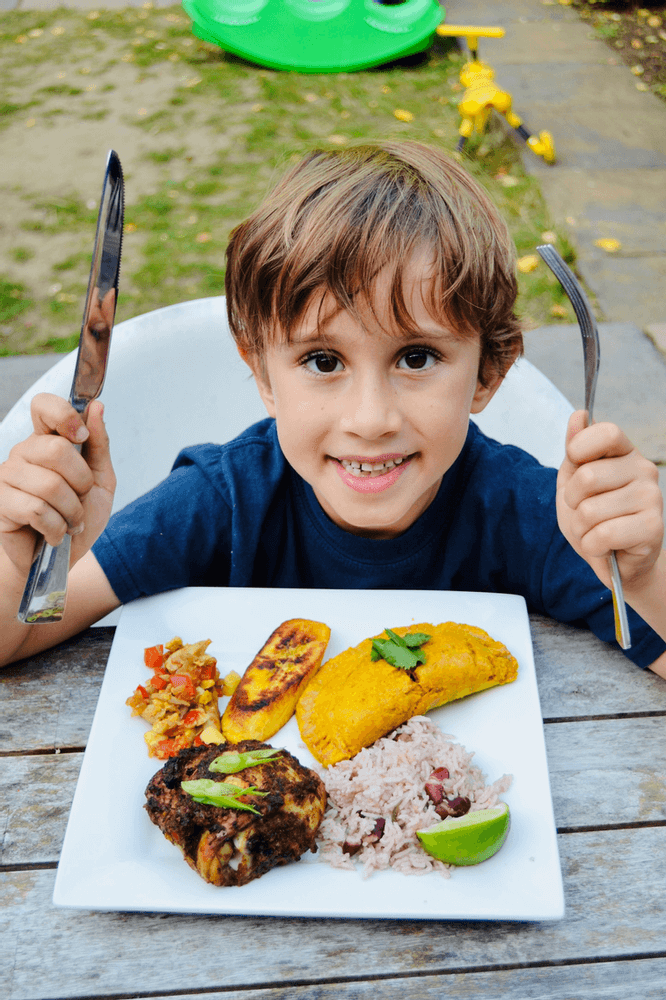 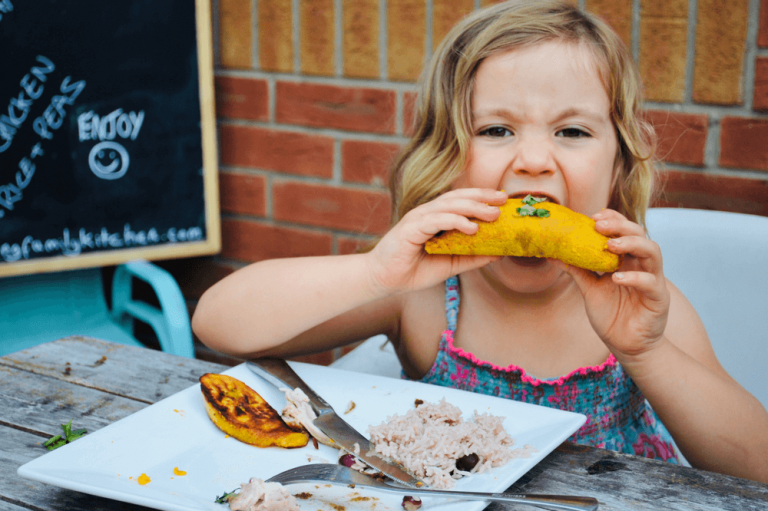 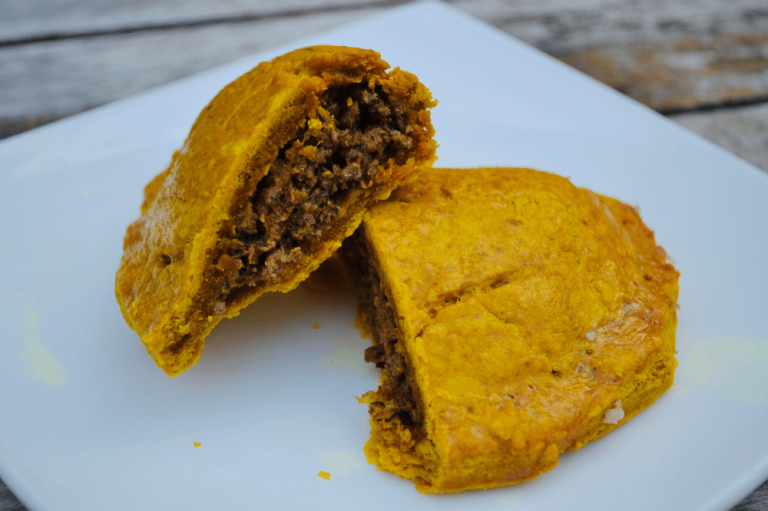 Not afraid of the heat 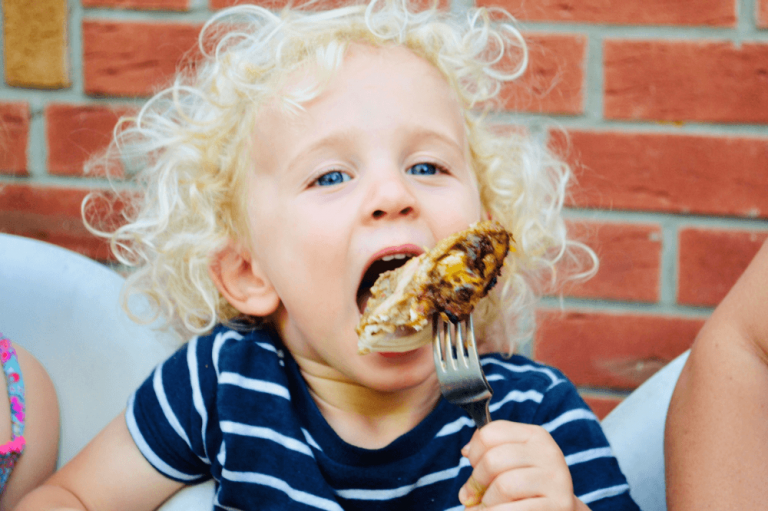 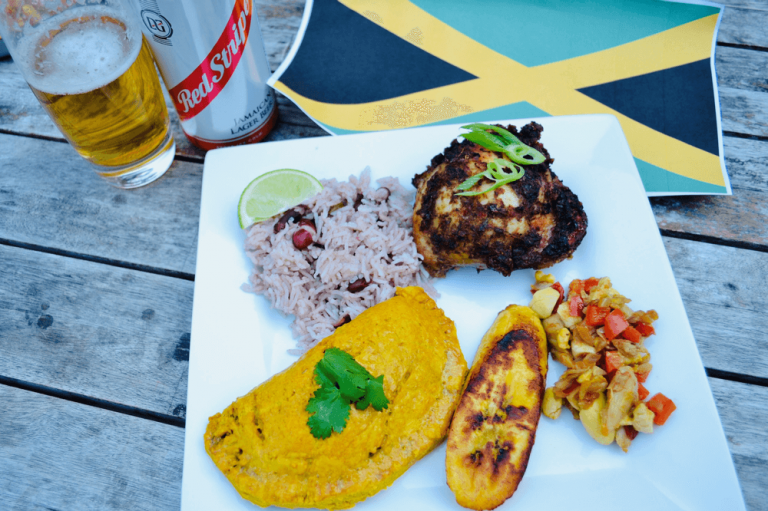 Jamaica - that was epic! 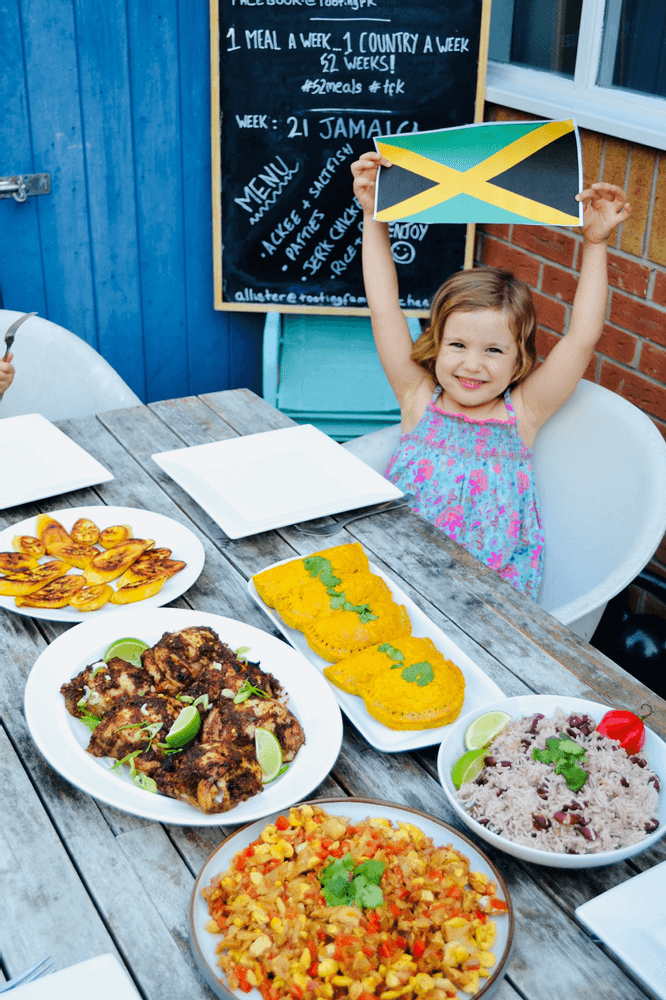 Thank you Jamaica, that was epic! Can’t wait to explore more of your cuisine.