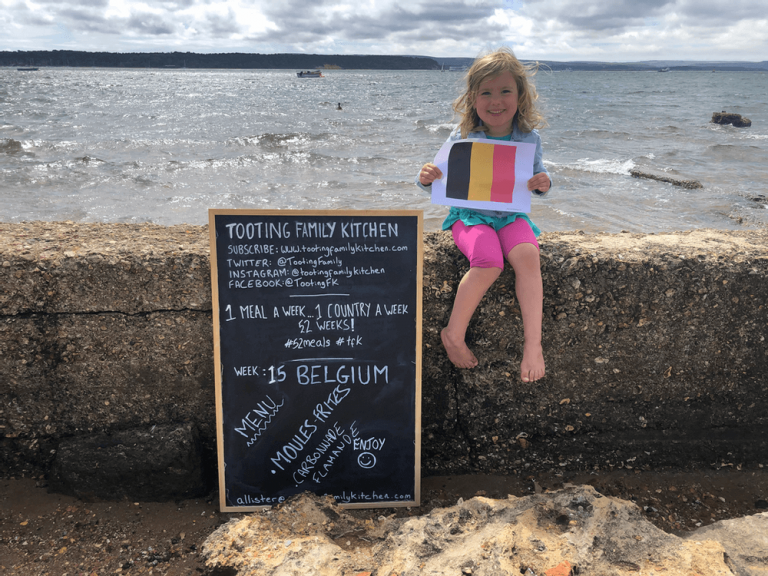 Thank you for joining Tooting Family Kitchen for Week 15 of our 52 Meals Challenge. If you are hitting our blog for the first time, welcome! We are on a culinary journey, exploring different cuisines from around the world to get kids cooking and learn about different International Cuisines and Cultures – celebrating Diversity through Food.

We have set ourselves a challenge to cook 52 Meals from 52 Countries in 52 Weeks, sharing our family cooked recipes and experiences as we go. If you like our content please do share and subscribe (at bottom of the page) to ensure you don’t miss out on future family cooking destinations – we promise we won’t spam you, just a weekly reminder when we publish our latest International recipes 😊 Next week is a special one for us as we visit family in Albania from where we will be cooking a BIG Albanian Family Feast!

This week we have left our little Tooting Family Kitchen and are getting the kids cooking from the parents/grandparents house in the wonderful Poole Quay, from where we will be cooking our Belgian Feast (and eating a tonne of fish and chips)! Although I have been to Belgium on numerous occasions it has usually been commuting back and forth to Germany when I was stationed there for a few years. I got to know the Antwerp ring road very well and its fair to say that although we spent a LOT of time in each other’s company it was a relationship that was never going to blossom. It was also the scene of a rather strange joint training exercise with the Belgium Armed Forces where we were made to lie down in a shallow pit with what was effectively a large cushion on our back, whilst a tank drove over us, so that we would feel the pressure but not get injured….next up we crouched in a man hole facing the tank ducking at the last minute as the tracks went over us! All very odd and not quite sure what it was training us for – I remember hoping at the time, as a young new soldier, that ducking tanks was not a common eventuality!

Fortunately though, for all the hours spent in mind numbing traffic and all those times being run over by tanks, I have also had the absolute pleasure of spending a weekend in Bruges, the capital of West Flanders in northwest Belgium. Bruges is a stunning little city distinguished by meandering canals, cobbled streets and beautiful medieval buildings. It’s often the case that cities don’t live up to what’s on the front of a post card but Bruges really does and it presented the perfect backdrop to experience their cuisine – and forget about the tanks!

It is sometimes said that Belgian food is served in the quantity of German cuisine but with the quality of French food. I think this could be a fair comment depending on how one interprets it. I love German food, especially in the winter! It is comfort food at its best and goes so much further than the ‘bratwurst’! Huge knuckles of pork, hearty soups, piles of braised vegetables and potatoes washed down with the best German beers is always going to keep the cold out – add the refinement and culinary attributes of good French cooking and it’s a winning combination!

There is one thing in particular that is widely thought to originate from Belgium that deserves applause above all else. It is something that has brought happiness to people of all ages, all races, all cultures, all nationalities. It has put a smile on the face of screaming kids, it has cheered up the most miserable souls and people have built their businesses around this wonderful creation…the chip! At this point any French followers of this blog are likely to stop reading now and I appreciate this is an ongoing dispute, they are called ‘French Fries’ in many places after all…however…the earliest evidence points to them being eaten in Belgium in 1680 and it is argued that American soldiers during the First World War called them “french fries” because the Belgian soldiers who introduced them to the dish spoke French, so for me…Belgium, I salute you!

In addition to the chip (although I think I could stop this blog right here and Belgium would have enough appreciation for this magnificent creation on its own) this tiny country (one of the 100 smallest in the world) has a huge beer tradition and has more distinct types of beer per capita than anywhere else in the world. So important is beer to the countries culture that it is protected by the UN having been declared a World Cultural Heritage by UNESCO…I mean seriously?! A country that is responsible for creating chips and has beer as a World Cultural Heritage deserves to be taken very very seriously. As well as being drunk, beer has an influence on many Belgium dishes and in particular what is often considered a national dish, Carbonnade Flamande, a Belgian beef and onion stew made with beer. But perhaps the most famous dish that is recognised as originating from Belgium and is also considered their national dish is of course Moules-frites! Voted the 2nd favourite dish in France (after Magret de Canard) this is a seriously popular global dish and once again I raise a glass to Belgium…who consume 25 – 30 tonnes of these wonderful molluscs every year. Ironically I usually steam mussels in beer when I cook them but most recipes for Moules-frites use white wine which I have used today.

Is it any wonder that Belgium is home to the headquarters of NATO and the European Union? It’s like someone has said “right, where shall we locate our HQ’s” … “well, we are going to have a LOT of very boring meetings…who does the best chips and beer?”… “Belgium it is!”.

We hope you are enjoy our Belgian Family Feast of Moules-frites and Carbonnade Flamande! 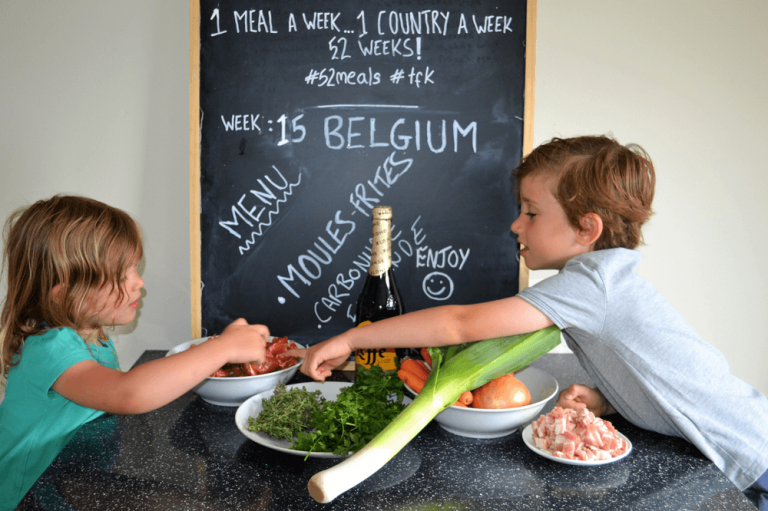 Getting the beef marinating... 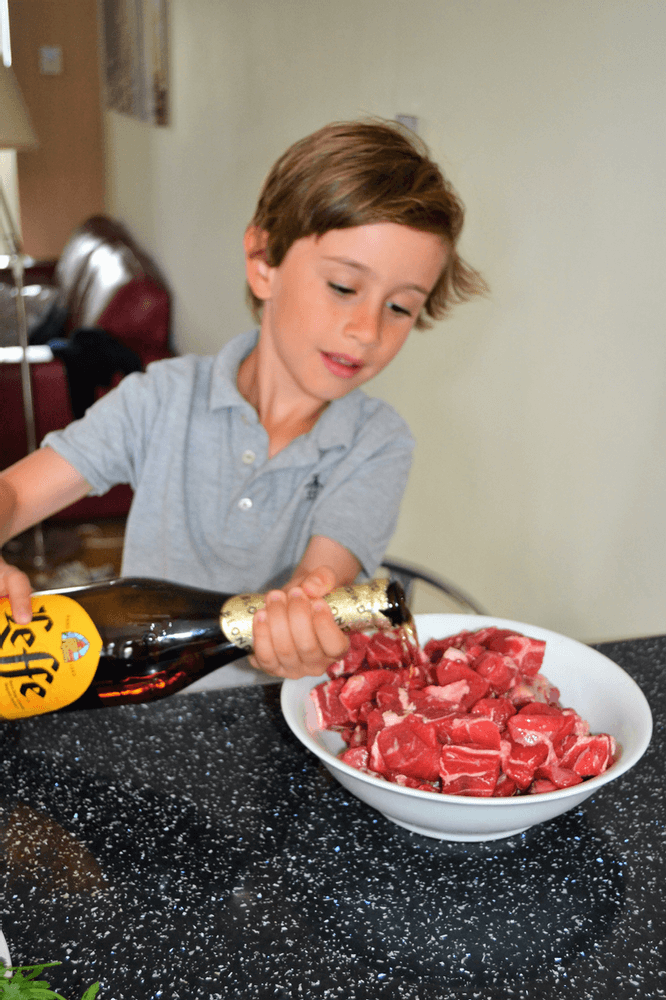 Cleaning and checking the mussels 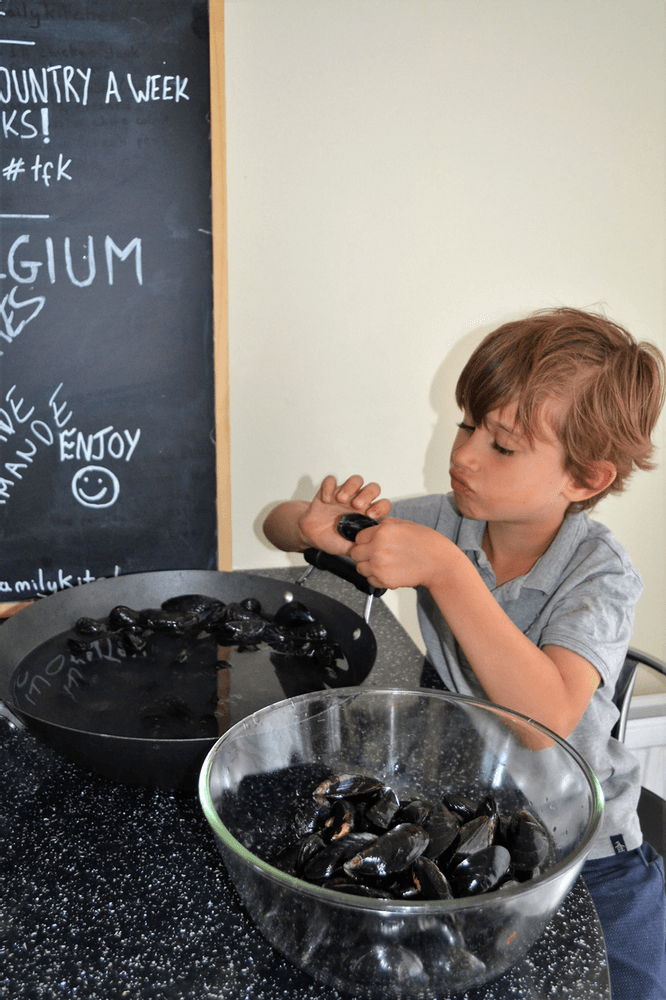 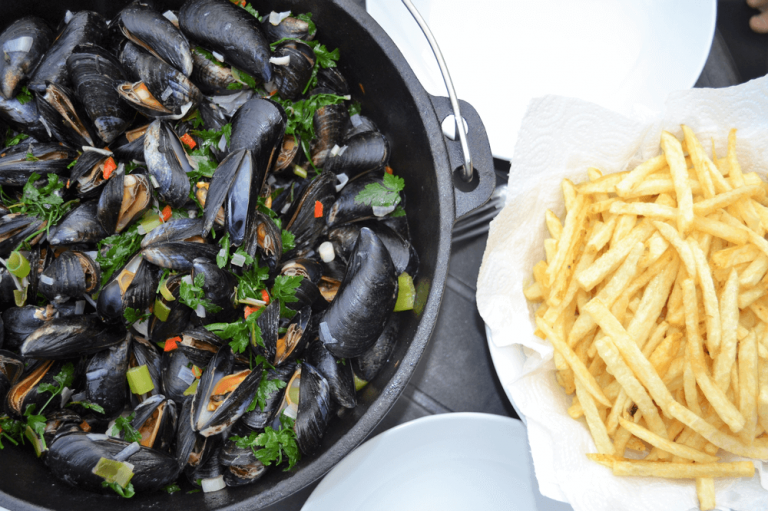 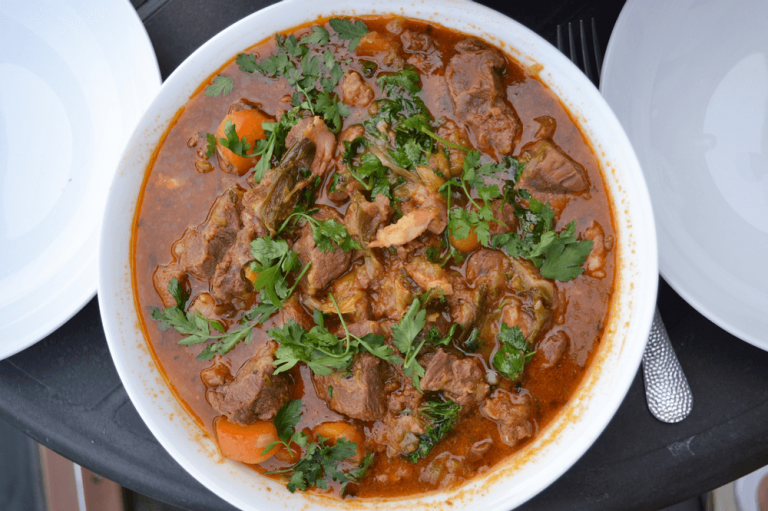 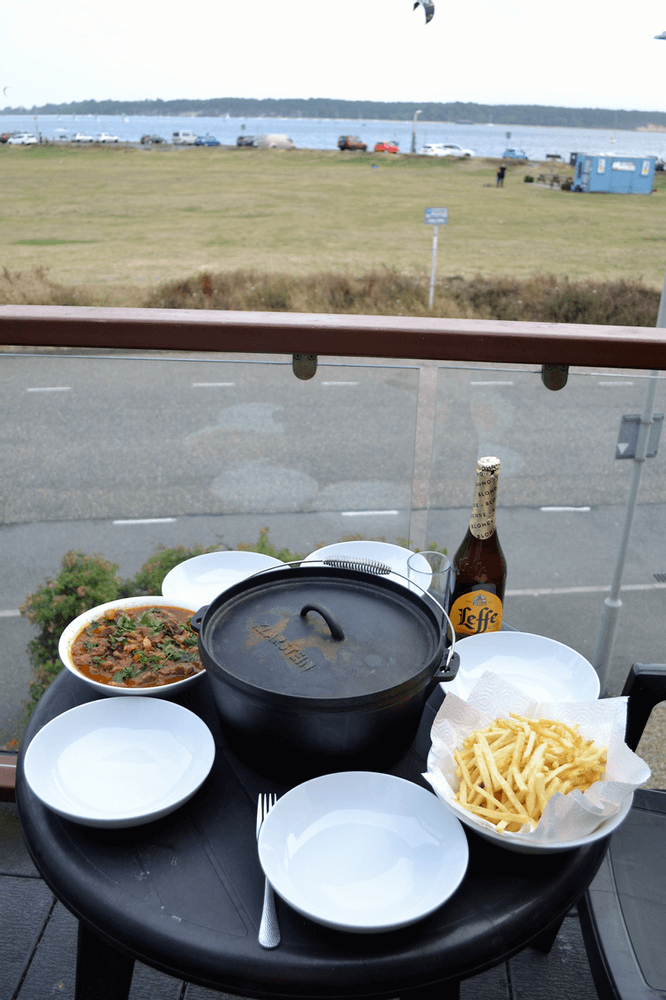 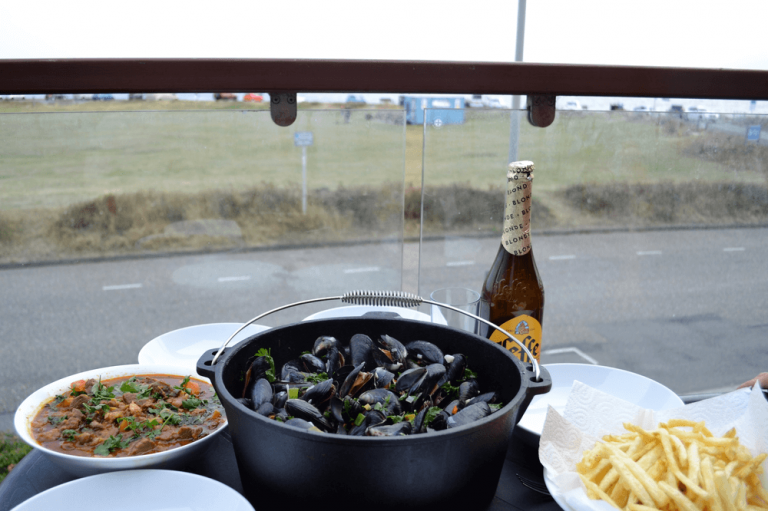 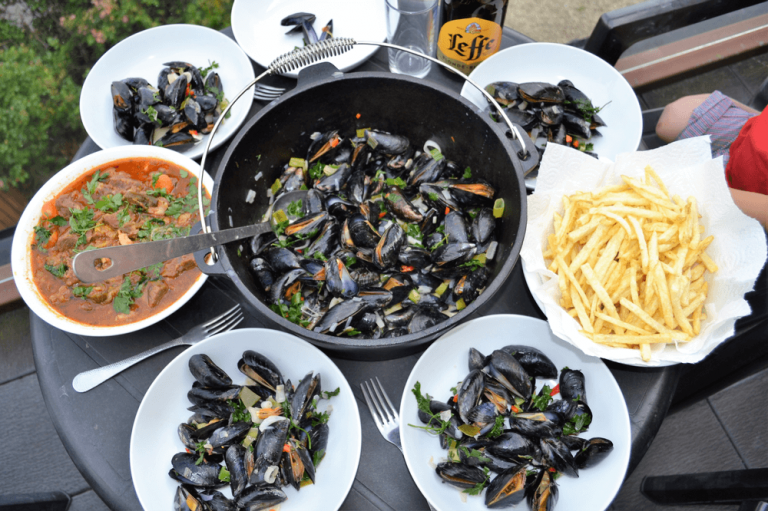 Joe's favourite have to be mussels! 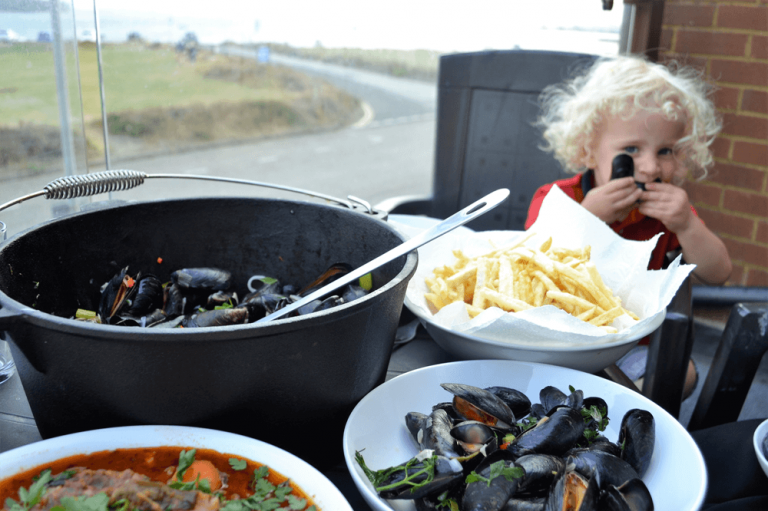 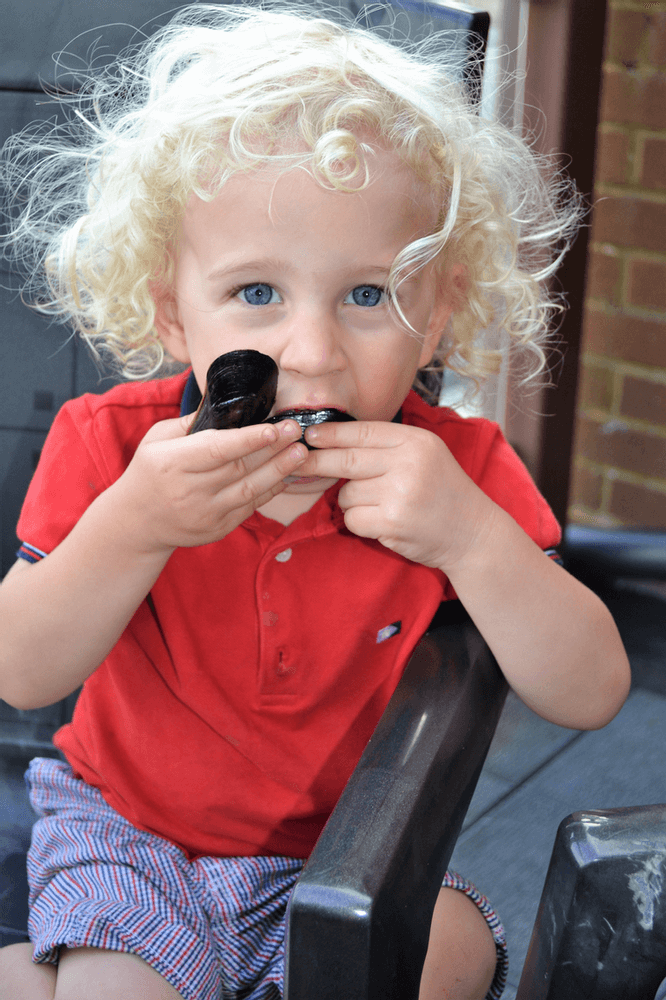 Doesn't get much better 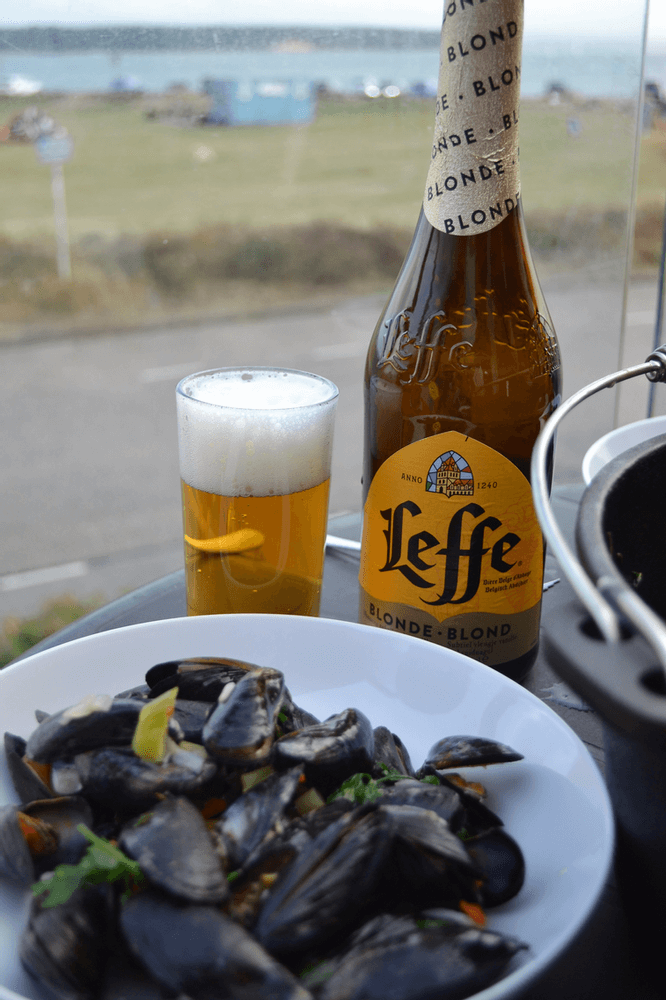 Time to get stuck into the stew! 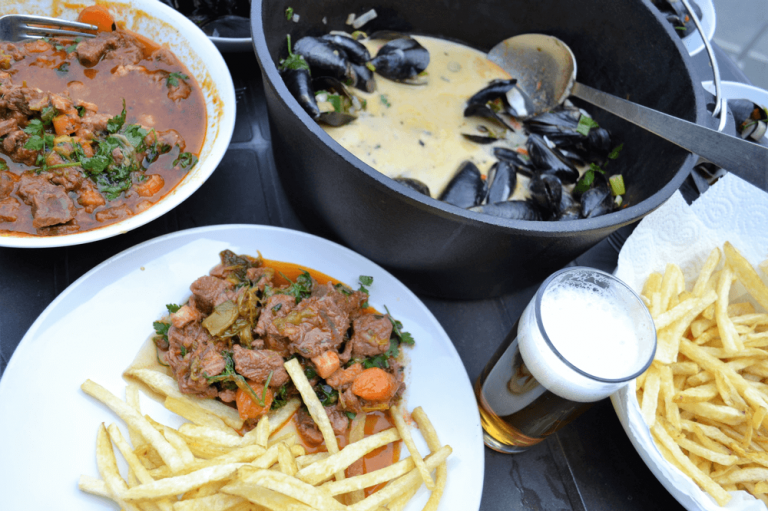 Thanks Belgium - that was great! 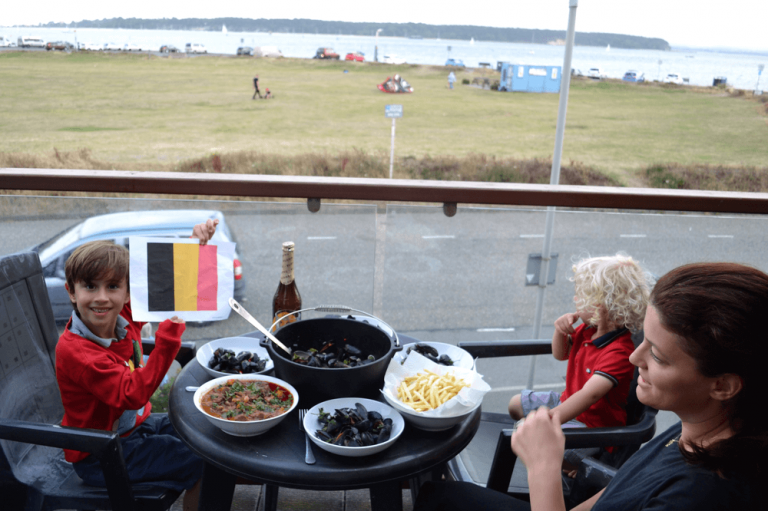 Belgium Thank You! We are so glad we continued our journey of recipes from around the world by visiting Belgium, learning about Belgian regional dishes and cooking with the family to create our Belgium inspired family feast – and of course we managed to get kids cooking! We look forward to learning more about Belgium food in the future!