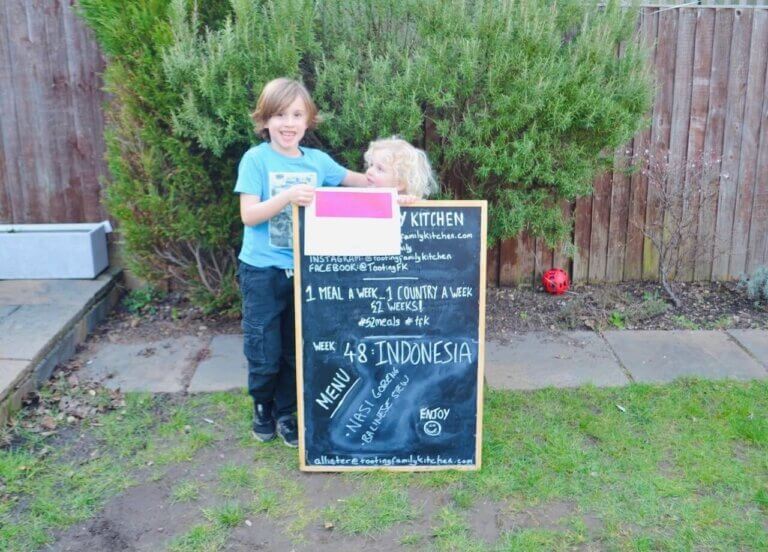 Week 48 and we are super excited to return to Southeast Asia for the final time. This week we check out Indonesia and get the kids cooking an Indonesian feast.

It seems apt to finish the Southeast Asian leg of this 52-week celebration of diversity by visiting a land that is diverse like no other. Indonesia is the world’s largest island nation. An archipelago of approximately 18,000 unique islands which make up this geological marvel spread out along the equator. A super exotic country where the Pacific and Indian Oceans meet and which is home to 127 active volcanoes (more than any other country in the world), which all contributes to this being one of the most biodiverse locations on the planet, and yet outside of the honeymooner’s favourite hotspot of Bali, many know little about the place.

The first things to note about Indonesia are a) It has a lot of people b) It has a lot of young people and c) It is the world’s most populous Islamic nation. Its population is only surpassed by China, India and the USA with an incredible 275 million people and it is thought that approximately 165 million are under 30, with a median age of around 28 years (by comparison the USA is around 36). The population quite literally doubled in 40 years between 1970 and 2010 making it a very busy and a very young place. Approximately 85% of Indonesians are Muslim and predominantly Sunni, however the constitution recognizes religious freedom, and 6 religions are officially recognized: Islam, Protestantism, Catholicism, Buddhism, Hinduism, and Confucianism. Interestingly Hinduism accounts for approximately 1.5% of the countries religious beliefs, although it is practiced by 87% of the population in Bali, which is why we also have a pork dish in today’s menu representative of this beautiful island.

The total number of islands in Indonesia is hotly disputed, namely due to some islands only appearing at low tide and depending on the surveying techniques used. Travellers however can experience completely different cultures, foods, dialects, and customs depending on the shores they step foot in. It is home to the world’s second, third and sixth largest islands and the world’s most populous island, Java, has a population of 139 million people with approximately 84 million speaking Javanese. That is more speakers than the entire population of the UK for what is not even recognised as the country’s official language. To really sum up the diversity of Indonesia one can look at the sprawling metropolis of Jakarta, home to over 10 million people and over 40 skyscrapers reaching more than 200m tall. In 2017 alone five 200-meter-plus skyscrapers were built and yet head east to provinces such as Papua and it is estimated you can find (if you look hard enough), nearly 50% of the worlds uncontacted tribes, some of which were fierce head-hunters in times gone by…and I am not talking about recruitment! If you are planning to island hop leave some room in the luggage for a few phrase books as approximately 700 languages and dialects are spoken across the archipelago with 270 dialects being spoken in one province alone!

The infamous Krakatoa eruption of 1883 is arguably the most famous in history and certainly produced one of the largest sounds, rupturing people’s eardrums over 40 miles away. With 127 volcanoes remaining active, it is a fact of life that millions of people are living within proximity of volcanoes which could erupt at any time. It was only 2 years ago that tourists in Bali got a fright with the eruption of Gunung Agung, but fortunately nothing eligible to go in the history books. It is home to the world’s largest volcanic lake, Lake Toba and it is believed that the eruption which caused the lake, threw so much debris into the atmosphere that it caused 1000 years of cooler temperatures across the planet. In the centre of this lake alone is the island of Pulau Samosir, home to the Batak people and a new island pushed up by volcanic activity.

If the volcanoes do not dominate the incredible scenery and landscapes the animals and fauna do. It is the only place in the world to see Komodo dragons in the wild. They do occasionally attack people but are not nearly as dangerous as the many cobras that live there, and I certainly would not want to have come face to face with what the Guinness Book of World Records lists as the longest captured snake, the 32ft reticulated python found on the Indonesian island of Sulawesi in 1912!  I would however, very much like to meet an Orangutan and Sumatra and Borneo (Borneo being shared with Malaysia and Brunei) are the only places in the world where it is possible to see these beautiful creatures in the wild. If you do find yourself trekking through the most heavily forested place on earth outside of the Amazon, and you come across a strange smell akin to rotten meat, don’t panic…it may not be a 30ft python’s leftovers but in fact could well be the world’s most odorous plant. The Amorphophallus titanium found in Indonesia releases such a foul odour when it blooms it can be smelled half a mile away.

As you would expect Indonesian cuisine is a diverse reflection of its 1300 or so ethnic groups and consists of around 5,350 traditional recipes. It is certainly one of the world’s most vibrant and colourful cuisines and we hope we have done it justice today! 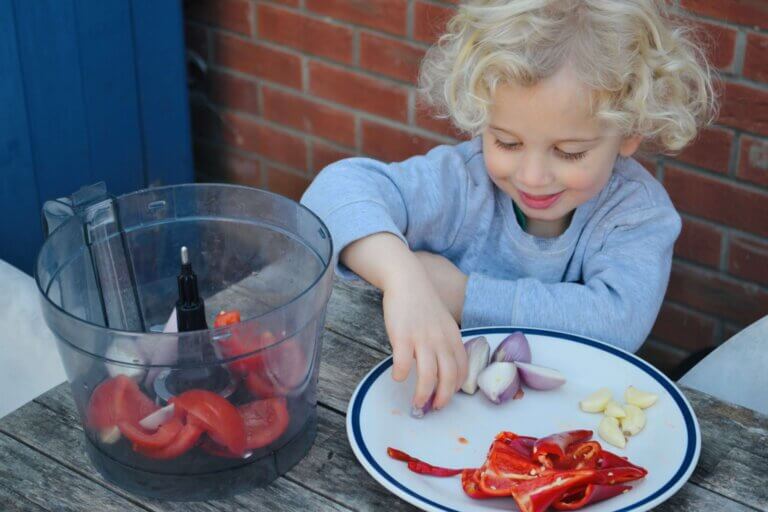 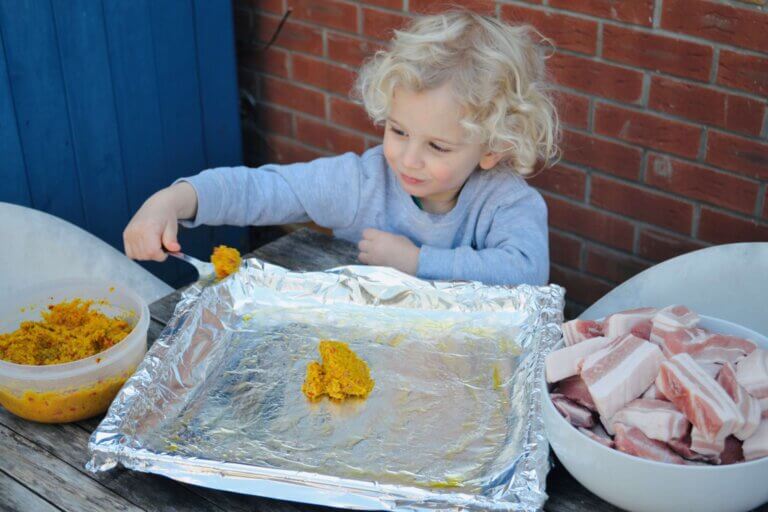 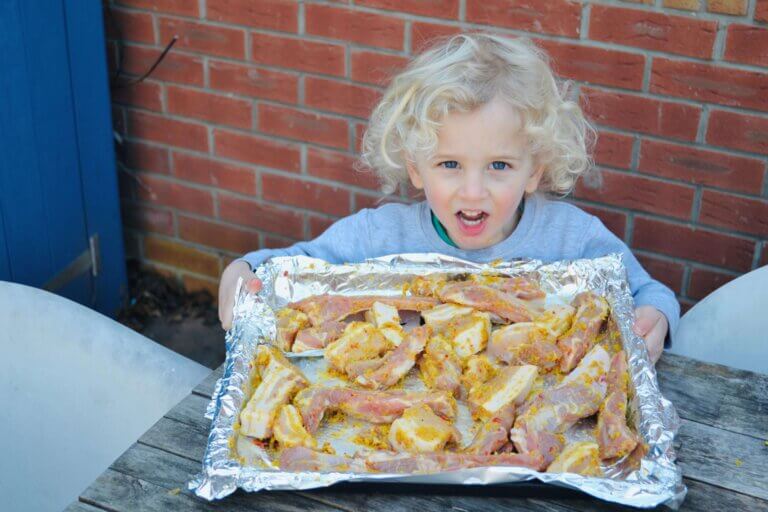 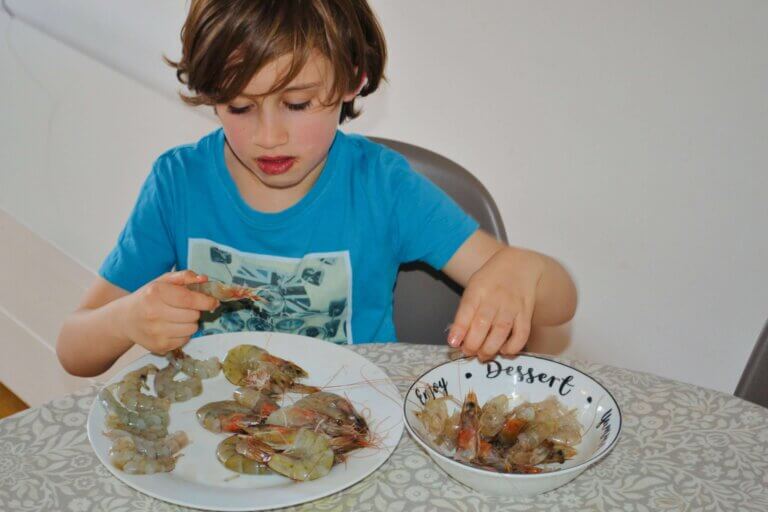 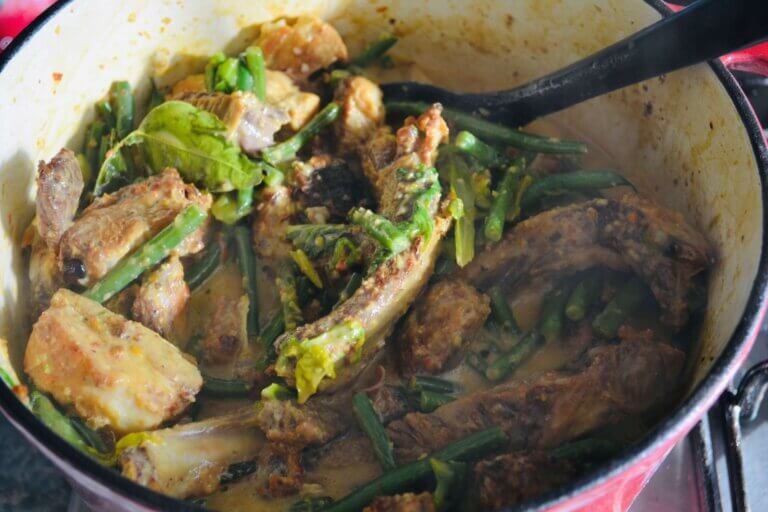 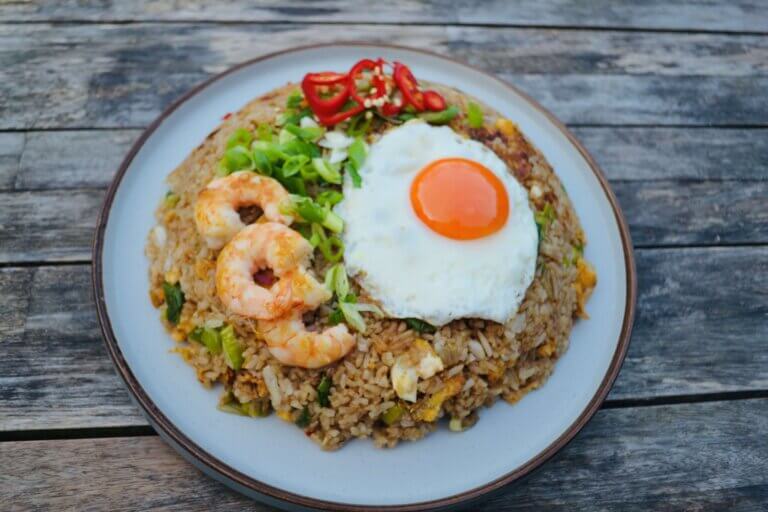 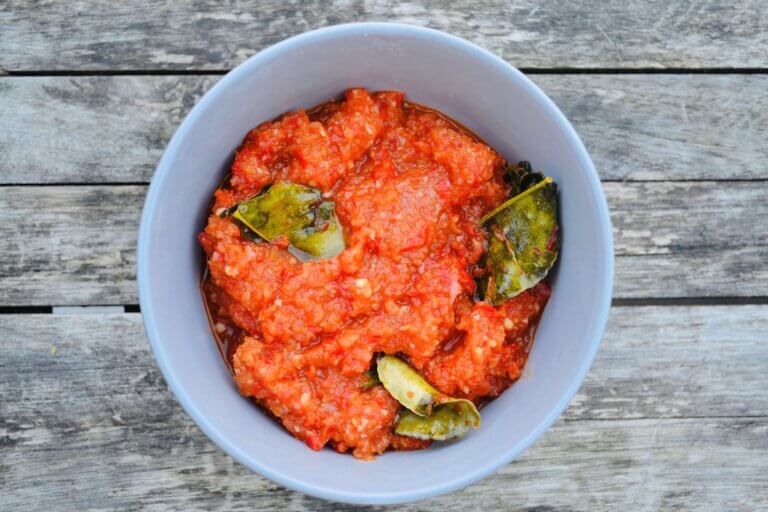 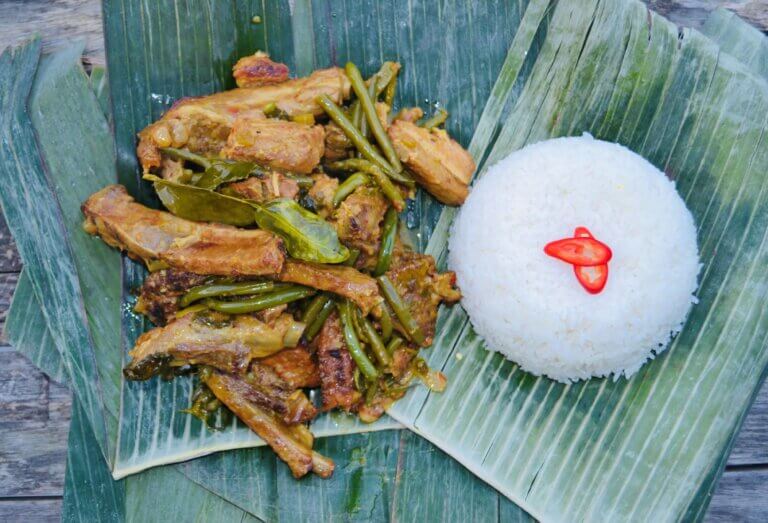 1 tablespoon each of black and white peppercorns, crushed 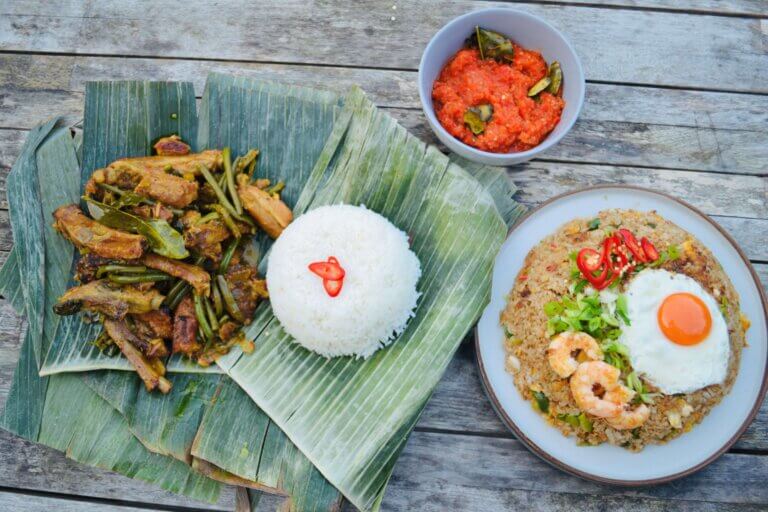 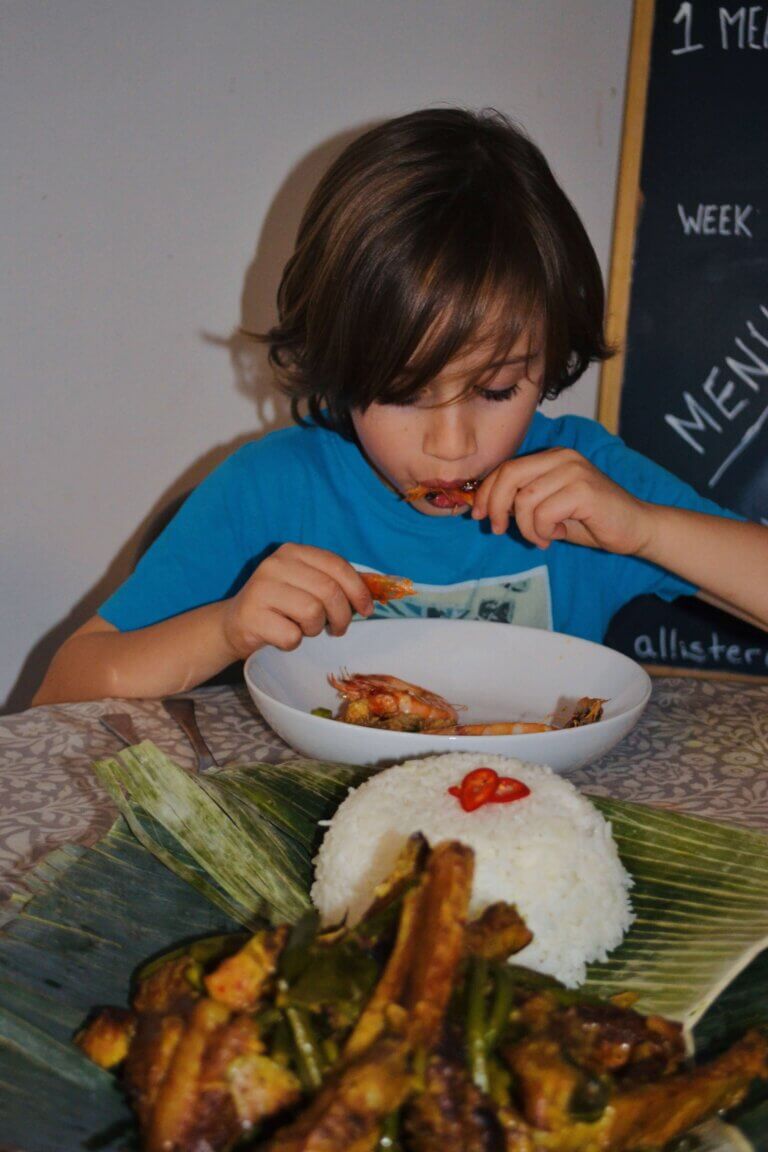 Straight for the bones! 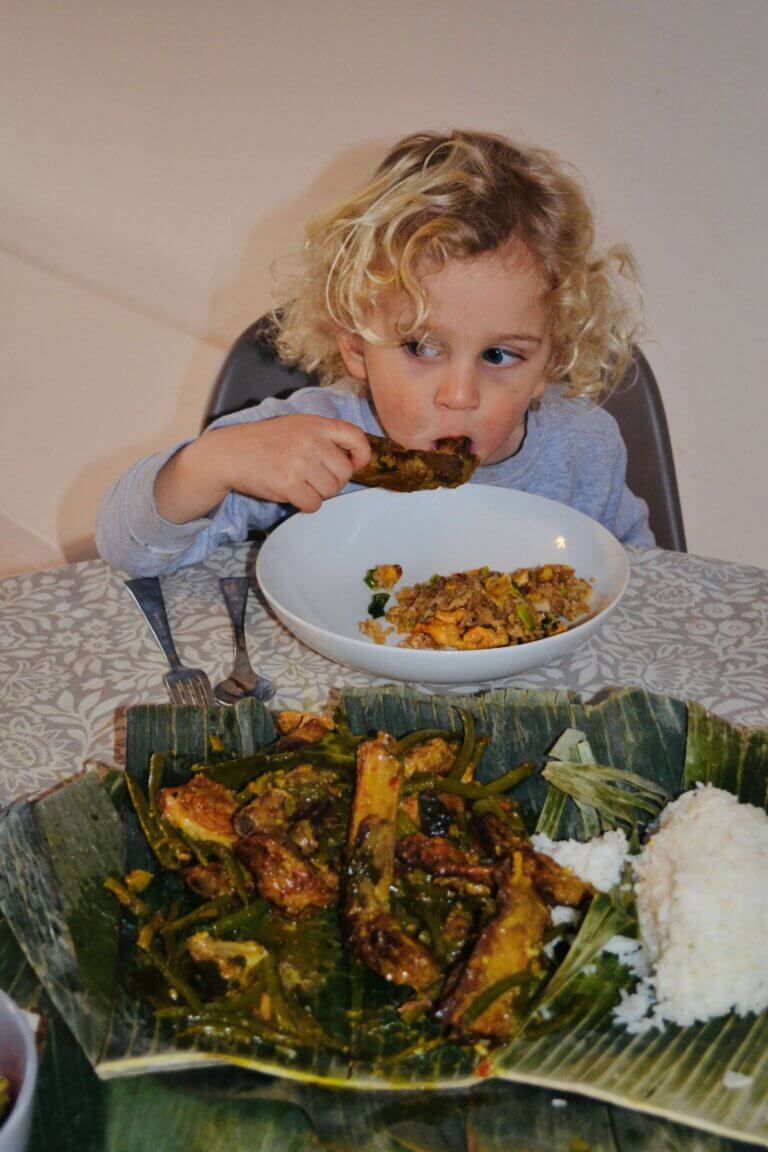 Thank you Indonesia, that was epic!

Next week we are excited to head to Sweden!!! … please don’t forget to SUBSCRIBE (scroll to bottom) & SHARE and if you have any International Food ideas or recipes from around the world you wish to share please do drop us a line